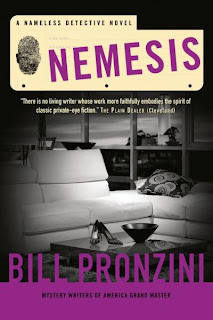 The latest Nameless Detective novel by Bill Pronzini picks up a few months after the events of Hellbox, last year’s instalment in the series. If you’ve read Hellbox, you’ll know that Nameless’ wife Kerry went through a traumatic ordeal that mirrored Nameless’ predicament in Shackles. The event has left Kerry traumatised, and Nameless is just as affected, waking up in the middle of the night from nightmares that bring his own ordeal back most vividly. As a result, Nameless has gone on a more permanent retirement from his detective agency, being involved as more of a consultant now.

This gives control of the agency to Tamara Corbin and Jake Runyon, Nameless’ partners. As the new novel, Nemesis, opens, Jake goes to the home of Verity Daniels. She’s a relatively young woman who recently inherited a fortune, but apparently someone has it in for her. This mysterious person has been calling her and making threating extortion demands. Jake agrees to take the case, but right off the bat something about Verity seems odd. She seems to be in some sort of trouble, and yet she’s oddly uncooperative and jeopardizes the whole operation. Jake begins to investigate Verity Daniels more thoroughly, and that’s about all I dare reveal about the book.


The only unsurprising twist in Nemesis is the very first one, and it takes Jake Runyon a while to figure it out. To be fair, he berates himself for not having seen it before, but it’s the only truly predictable moment. After this point, so much stuff goes wrong and the plot twists and turns constantly. Every time it seems like the worst has happened, something even worse happens. It makes for compelling, exciting reading: I read this book in only two days.

I really like the characters Bill Pronzini has created, and here the book is divided into three sections, each section following the actions of one of his main characters: Jake, Tamara, and Nameless (in that order). Of course, the Nameless Detective is not so nameless anymore: we’ve known for several books now that his name is Bill, and when his section of the novel begins, it’s called “Bill” instead of “Nameless” or having no name. Nameless and Jake are brilliant as usual, but I’ve really started to warm towards Tamara. When I first encountered her, I found her an annoying character, but over the last few books Pronzini has really developed the character in an unexpected way. Tamara’s brash, abrasive personality has turned into that of a workaholic trying to escape her personal problems by burying herself in her work. It’s a very interesting character portrait.

The main story ends in a satisfying way, but the personal subplots end in a way that I can only describe as “puzzling”. I really have no idea what to make of the end of this book. I can’t even hint at the reason why without spoiling it. It’s the last note I expected the novel to end on, and I have no idea where things will go from here. That’s a question that only Bill Pronzini can answer.

Overall, I really liked Nemesis. It’s a terrific entry in the Nameless series, and I think it’s the best in the series since 2009’s Schemers. If you’re a fan of the series, all I dare say is that you won’t be disappointed.