Poison, running through my veins... 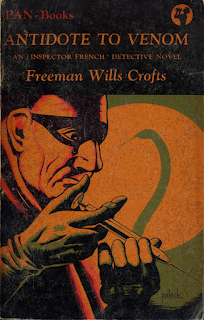 The case of Freeman Wills Crofts on this blog is a strange one. A few years ago, I read the short story collection Murderers Make Mistakes. The stories in that collection began as a series of radio plays, and Crofts turned them into short stories. I enjoyed the book, especially the first half, which effectively showcased Inspector French’s strengths as a detective. And yet, for whatever reason, I never returned to Crofts since reviewing that book. His name popped up prominently when I reviewed Curt Evans’ Masters of the Humdrum Mystery, but apart from that, it was all quiet on the Crofts front.

So in August of last year, I decided to remedy the situation by picking up Crofts’ Antidote to Venom, a book which landed on my radar when John over at Pretty Sinister Books reviewed it (and directed me to a website where I found a cheap copy of the book – thanks once again, John!). But tragedy struck, and as I packed my bags to move to the seminary, I managed to lose my copy of Antidote to Venom, having read about halfway through. Then, a few weeks ago, when I was visiting home, a stroke of luck occurred – I found the book, with the bookmark still in place! And so I eagerly picked up the book and after briefly refreshing my memory on what had occurred, I read on.

Antidote to Venom tells the story of George Surridge, the director of a zoo in the noble town of Birmington. He finds himself strapped for cash, thanks in part to his gambling, his spendthrift wife Clarissa, and his mistress Nancy. His elderly aunt is due to kick the bucket soon, and when she does so, George will get a nice little sum of money, just enough to cover his most pressing debts. And thus George begins to daydream about murdering his aunt…

Fortunately, before he can act on these fantasies, his aunt dies of natural causes. But a new problem presents himself: the money his aunt was to leave him is all gone, having been gambled away poorly invested by her solicitor. It’s a disaster – how is George to pay his debts now? The worst of it is, he’s been granted a loan based on the money he was expected to inherit from his aunt, and Messrs. Abraham & Co. are not likely to take this news well. And so George enters into cahoots with David Capper, the dishonest solicitor, in a conspiracy which will bring them both the money they badly need… 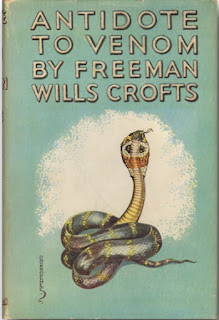 Antidote to Venom begins as an inverted detective story, in which the murderer and motive are known, but details about the method employed are hidden from the reader. Then, in the second part, Inspector French arrives on the scene and must deduce murderer, motive, and method. It’s an interesting experiment on Crofts’ part, an attempt to write a novel with complex characterization in which George’s motivations are meant to be as engaging as the intellectual puzzle. And in my humble opinion, by and large the book succeeds.

The plot is a good one, full of clever and intricate details which French must uncover through methodical police-work. (That being said, at one point in his investigation French flagrantly breaks the law, but he’s the detective, so hooray for justice.) I liked how not all of the details of the plot are revealed at first, which gives Crofts a “fail-safe” of sorts – if his attempts at characterization fall flat, there is still an element of a puzzle to draw readers in.

Fortunately, the fail-safe is unnecessary. Crofts is much maligned for poor characterization, and even in my positive review of Murderers Make Mistakes, I noticed that one of the stories included a miser named Ebenezer and a murderer named Crookes. However, the character of George Surridge is a largely successful one. He is a man who becomes bored with the drudgery of his life, and decides to seek excitement in all the wrong ways. One mistake leads to another, and before long, he’s in such a deep hole that he cannot find a way out. When Capper offers him a rope, apparently his key to salvation, George clutches at it, but the tragedy of it is that the rope is actually a hangman’s noose. 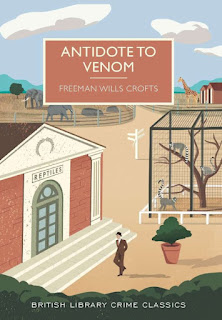 My only complaint about this book is that its careful pacing is suddenly accelerated towards the end. As soon as French gets on the right track, everything falls into place so quickly that I almost got whiplash. In some ways, the ending smacks of deus ex machina, especially George’s spiritual experience towards the end. Freeman Wills Crofts was a devout Christian man, and this part of the book draws on that to bring the story to a close. I found myself wishing that it had happened in some other way, though, or that Crofts had taken more time to get to that stage. It just feels a little too contrived.

However, overall, I can recommend Antidote to Venom without hesitation. I was genuinely upset when I lost my copy, and I found that when I found it again, I remembered pretty much everything that had transpired, even though almost an entire year had passed. I was eager to finish the book, and enjoyed finishing it, even though I have problems with the ending. Overall, it’s an intriguing experiment by Freeman Wills Crofts and shows why he had such a high reputation during the Golden Age of Detective Fiction.


By coincidence, this book was just brought back to life thanks to the British Library’s reprint (dated July 5 2015 on Amazon). This review was not planned in any way to coincide with the reprint. As usual, I blame the ghost of Harry Stephen Keeler.