Written by Patrick
Once upon a time, there was an avid fan of detective fiction named Patrick. Patrick did not yet have a blog named At the Scene of the Crime. Back in this Dark Age, in order to talk with like-minded mystery fans and find out about book recommendations, Patrick frequented several Internet forums, where he learned to refer to himself in the third person. On one of these forums, he was introduced to a manga series called Case Closed. 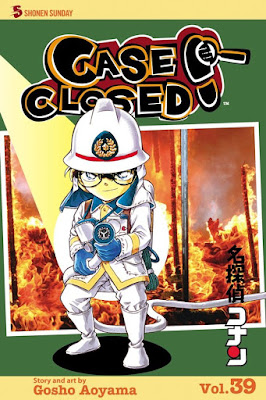 Okay, I’m dropping the third-person narration now. When I first started to read Case Closed, it was love at first sight, and I read absolutely everything that had been translated into English to that point within a month. This was my first serious exposure to manga, and I remember that learning to read the images right-to-left was a bit of an adjustment. Yet at the end of the day, I loved adored the visuals of Case Closed. I loved the characters. And I thought many of the mysteries were imaginative, intriguing, and some of them are among the most ingenious mysteries I’ve ever encountered. (Seriously, the locked room in volume 19 is something I still remember.) The only entry in the series which I reviewed on this blog was Volume 38.

And then… stuff happened. At first, my library didn’t purchase Volume 39 upon publication, and I was forced to wait. And then other books popped up on my radar. I started reading even more contemporary mysteries. And Case Closed was set aside… but not forgotten. (I couldn’t have forgotten if I wanted to, what with reviews popping up regularly on Beneath the Stains of Time.)

Then a few weeks ago, I discovered to my delight that this series is available, in its translated entirety, for the Kindle. The advantage to this is that I can purchase a volume in this series for as little as $5. Thus, I can support an author and a series that I genuinely admire. And now that I’ve a little spare time, that’s exactly what I did, purchasing and reading Case Closed: Volume 39.

The Lure of the Red Horse
The first story in Volume 39 takes up 5 out of 11 “chapters”. In it, Conan teams up with his friend Harley to solve the case of a serial arsonist who is burning buildings in numerical order – first burning down a building in a block 1, then block 2, etc. The arsonist leaves behind a calling card, a red horse – “red horse” having been an old piece of Japanese slang for an arsonist. Is the firebug leaving a message for a senior detective, someone who would be familiar with that term? The game becomes far more deadly when the firebug’s newest fire leaves a charred corpse among the building’s smoldering ruins.

This is a very good story – it’s an explicit homage to Agatha Christie, especially one of her most famous books. Indeed, it’s remembering Christie’s book that sets Conan and Harley on the track to finding the arsonist. Yet the story does not confine itself to rip-off strict homage territory – it’s a good story on its own merits, and it made for a really enjoyable re-introduction to the series.

A Friendship Torn Apart
At three chapters long, this is a standard-length tale in which Conan and his friends encounter a group of college students gathered for their last holiday together before they graduate. Camaraderie is in the air… or at least, it is until one of the students turns up dead as the result of an unfortunate bicycle accident. But this being a mystery, all accidents are inherently suspicious, and Conan soon unravels the murderous truth at work…

This was a satisfying story. The culprit is a little bit obvious, and the trick behind the accident is not a revolutionary one. But it was all woven together competently, there was some good comic relief, the culprit’s motive was a compelling one, and I liked rediscovering Conan’s friends, who form the “Junior Detective League.”

A Little Client
A famous child actor shows up to Richard Moore’s office. It turns out he was abandoned by his mother at a temple when he was a year old. His mother has been writing postcards to the star, and he tells Moore he wants to find her. They follow the clues to a hotel, looking for the star’s mother, but they are not the only ones – a slimy reporter is already at the scene, eagerly waiting to write the scoop of the century. Unfortunately, he won’t be doing any writing… because he is murdered. There are three female suspects, and a visual clue plays a big part in the case. All in all, it’s a decent story. I found the set-up a little bit odd, since it relies on the testimony of a witness who was less than one year old. The murder weapon is also odd – I’m not sure this would work to the desired lethal effect. But the former is necessary for there to be a story, and the latter is not the essential element of the story. All things considered, it’s a good story, but far from the best this series has produced.


Overall, returning to Case Closed: Volume 39 after all this time was like returning to a city a few years after moving away, and visiting an old friend. I really enjoyed myself, and with luck, I’ll be revisiting this series somewhat more often.

Note on the Kindle edition: Fun fact -- the right-to-left order of the manga books is preserved in the Kindle edition. So, instead of the usual swipe/push on the right side of the screen in order to get to the next page, I had to swipe/push on the left side of the screen. This was a good way to preserve the right-to-left reading experience. Also, the quality of the Kindle book was very good - to me, it was just like reading the manga in physical "book-book" format.