V is for Vampire 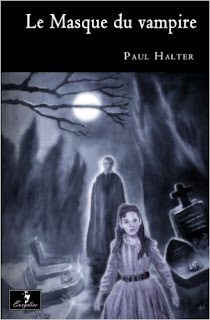 It’s September 1901, and the small village of Cleverley is gripped with panic. It started with children telling wildly improbable stories – a sinister face pressed against a window, a man appearing out of nowhere from a mysterious greenish fog, a sinister figure seen near a cemetery undoing the knots on a piece of string… But when a young girl narrowly escapes a vicious assault, the villagers gather at the cemetery and make a shocking discovery. One of the family crypts has been left wide open, and two of the coffins inside have been vandalized. The corpses inside have been impaled through the heart with a wooden stake… and although both have been dead for many years, one of the bodies looks like it has been dead for only a few weeks.

The two vandalized corpses are the two deceased wives of a Russian count, the subject of many a malicious rumour in the village. It is said that his wives, before their deaths, developed a taste for human blood, and one of them even was implicated in the death of a child. And wife number 3 is looking alarmingly pale lately… and has taken to wearing a scarf around her neck.

Never fear, for Owen Burns is nearby. He is investigating the death of a Catholic priest, whose last act was to hear a dying man’s Mysterious Last Confession. He makes a connection to an unsolved murder case which took place in a locked-room. Before long, a similar locked-room murder takes place, sending Owen Burns and his partner-in-crime, Achilles Stock, to Cleverley. There, they discover that the main suspect in the locked-room mystery is our friend the Russian count… an alleged vampire!


Thus kicks off Le Masque du vampire (The Mask of the Vampire), the newest Paul Halter novel. It was published at the end of August 2014, and as far as I can tell it is Halter’s first attempt to incorporate vampires into one of his mysteries. It’s a pretty good go of it, in terms of setting up the mystery – the second locked room murder takes place with three witnesses in the vicinity, who swear that the killer turned into smoke and vanished up the chimney. Another intriguing element of the mystery is how the Count’s reflection was not seen in a mirror when he walked through a door – even though the door in the mirror opened and closed in unison with the real-life door, and subsequent experiments showed that anyone opening the door would have been visible in the mirror!

I decided to read this book, instead of a translated Halter novel, because it was the only one I had with me at the time, and I really wanted to read something in French. I try to do this regularly in order to keep up with the language. I bring this up because my main difficulty with the book has to do with my reading it in French. One of the locked-room mysteries has a solution which can be classified under the technical/mechanical variety… and I quite frankly didn’t understand one bit of it. I’m bad enough at understanding these tricks to begin with (I did not do well in my physics classes), and reading the solution to one in my third language just piled up the confusion even higher for me. I kind of understand the gist of half of the solution, but I’m completely baffled as to the other half and how the two fit together. As a result, I felt dissatisfied with the solution to this locked room murder. That's on me, though.

Fortunately, the other mysteries have much better solutions. I particularly liked the mystery of the count’s invisible reflection, which was ingenious and magnificently simple. The second locked-room mystery is more on the complex side, but I liked it, even though I tumbled to the nature of the trick (minus exact specific details).

This book was a good read, but I can’t help but feel it was a little too long for its own good. It is just over 300 pages long, and I think the pacing would have been tremendously improved if 50 pages or so had been excised. It is much better in this department, though, than 2013’s The Indian Tomb, which dragged on for quite a bit before a meaty crime was introduced.

This mystery is solved by Owen Burns, and I like him very much. Of Halter’s two series detectives, Burns seems to me the more original, the more colourful. It also gives Halter the chance to tell a story without too many useful forensic clues (e.g. fingerprints). However, if you read this book as a historical mystery you will be disappointed. The characters are very much modern products, and do not act like people who lived in 1901 England. As a result, there’s very little historical colour. I’m personally fine with this in this case, because Halter is striving for an entertaining story, not authenticity.

Overall, I enjoyed this latest offering from Halter. His atmospheric work is very good in this book, and helps make the mystery more intriguing. Most of the impossibilities have good solutions, and vampire lore is effectively incorporated into the plot. Plus Owen Burns is fun as usual. It’s one of Halter’s better works in recent years. Though not on the same level as some of his masterpieces, it’s just as good as (or better than) The Seven Wonders of Crime or The Tiger’s Head.