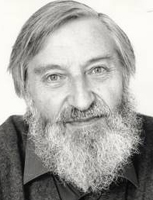 On March 27th, 2011, H.R.F. Keating, prolific mystery author, passed away at the age of 84. By all accounts, Mr. Keating was a charming person and excellent friend, and will be missed by many. My sincerest condolences go out to the family and friends of Keating.
Personally, I had never read one of his novels before. He was on a list of authors I like to call my “you really should give this guy a chance someday” list. After hearing of his death, however, I decided to read the first Inspector Ghote novel, The Perfect Murder, in his honour.
This is a wonderful book in many ways. It involves Inspector Ghote, a hardworking police officer in India who must solve the Perfect murder—which technically isn’t a murder, since the victim, Mr. Perfect, is still alive (though teetering on the edge between life and death—it could turn into a murder at any instant). Ghote is a very likeable character. He is hard working and he wants to fulfill his duties in the best way he possibly can, and genuinely regrets being forced to work long hours and not come home to his wife and child. He lovingly keeps a volume of Gross’ Criminal Investigation in his office and consults it regularly. He is a nice person you want to succeed in the end.
The plot itself begins with the Perfect murder, but quickly, Ghote is assigned to another case, as there has been a theft in the personal office of the Minister for Police Affairs and the Arts. What was stolen? The astronomic sum of… one rupee. It seems like a silly assignment— why is such a case being given priority over a case of attempted murder? 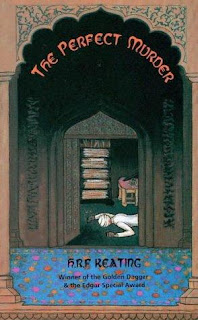 Throughout the course of the book, Ghote and his partner, the Swedish Axel Svensson, wander around the streets searching for suspects, trying to reach appointments on time, and of course, trying to deduce what has happened. Svensson is there to observe the police procedure of India, and is shocked at the corruption, the poverty, and how the police is threatened by the suspects it attempts to question—Ghote almost seems to accept it for what it is, as though things could never possibly change.
Several things impressed me about this book. For one thing, the Indian setting is beautifully evoked, and feels genuine throughout. In fact, I was shocked to learn that Keating wrote this book without having set foot in India! It just goes to show you how remarkable a talent this man had, for he was able to transport me for a few hours to a land he himself had not been in.
Another thing that impressed me is that Keating never overdid elements that turn me off many modern authors. This novel has got some deduction in it, but it is very weak. The solution to the impossible theft is extremely boring and obvious, while the attempted murder has an easy-to-spot solution. The Indian setting and the theme of justice is given just as much time as the mystery in this novel, but Keating never goes off into heavy-handed symbolism or faux artistry. He keeps things very real and down-to-earth, and it is interesting to read along, even if the puzzle is not the greatest.
His characters are also excellent. One of the major characters is Lala Varde, the man for whom Perfect worked. He has a tendency to rhyme back-to-back words, making one up if he feels like it. Despite this, he is a ruthless man who seems to duel with Ghote all throughout the novel in an infuriating passive-aggressive manner. He seems to be cooperating, and suddenly withdraws, threatening Ghote with ominous hints that he has friends in high places just moments after praising him. Their verbal sparring makes for one of the book’s more interesting features, and Varde is annoying in just the right amount—you want him to lose, but it is possible to feel sympathy for him at times. His two sons, Dilip and Prem, are also prominent characters. Dilip is a nasty type. Whereas his father is ambiguous about his threats, Dilip insults Ghote outright, and seems to be offended at the suggestion that he has overstepped boundaries. Yes, he may read mystery novels, but he isn’t a nice person in the least, and he is unusually reticent about the events of the night of the attack. His brother Prem, meanwhile, is easily pushed into confessing what happened that night, and he is the nicest character of the bunch. He’s a nice sort who struck me as a bit of an artistic type, who wants to be his own man, while his father wants to force him into the family office, cruelly taunting him about it. Is it a dysfunctional family? You bet! But Keating does not ramble on in mindless character angst. His characters are well-developed and believable.
This was a delight to read, and I can now see what an enormous talent has been lost. I liked this book and will most likely read more of Keating in the future. It is in moments like this when you realize there really is more to life than just mystery novels, as wonderful as they can be. Life is a precious thing, and it passes by so quickly- we should enjoy it while it lasts and be thankful for those around us.
As a parting thought, I would like to bring up a quote from Keating’s novel Filmi, Filmi Inspector Ghote, which was brought to my attention by a fellow mystery fan. I really like it and it sums up what I try to achieve in this blog’s theme and purpose:
“The scene of the crime. That was where he ought to be. There. Where it happened. Seeing for himself. Investigating. Taking charge. Taking the case by the scruff of the neck, by God. At the scene of the crime.”
In memory of H.R.F. Keating
1926-2011
R.I.P.