How to Make "Saw" Look Like a Family Film: A Lesson in Detection

Written by Patrick
Anyone who reads my blog knows that I am a huge fan of classic mysteries, particularly from the Golden Age, and those by authors who emulate the style. But there are times where I have tried getting through modern mysteries. I have come to the conclusion that imagination, creativity, and fair play with clues must be considered crimes for some reason or another— how else to explain the character angst that drives far too many novels, the touches of faux artistry, and the mysterious lack of a plot? 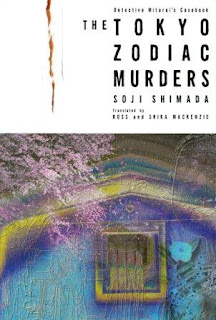 If my theory is correct, then Soji Shimada is a wanted man. Shimada is a Japanese author whose work has not really been translated into English. The only translated work of his I can find is his first mystery novel, The Tokyo Zodiac Murders, originally published in 1981. A translated publication was made available in 2004. If you’ve never read this book, I urge you to check your local library. If they don’t have it, I would recommend purchasing it from a bookstore. It is an investment I guarantee you will not regret, or I will eat my hat.
The Tokyo Zodiac Murders starts with a brief forward from the author, and I find it comforting that a modern mystery novelist insists on the very first page he will play fair with the clues. No evidence will be hidden- there will be an even playing field for the reader and the author’s detective, Kiyoshi Mitarai. Shimada is not lying. He gives you all the clues and plays 100% fair. In addition, he writes the best “Challenge to the Reader” I have ever read. After a specific point in the novel, Shimada tells you that you have all the necessary clues in your possession, and wishes you good luck in finding the solution. He doesn’t sound condescending or like he’s showing off: no, it’s genuine delight in the duel between author and reader. Shimada understands the mystery novel and has fun with it! He shows great creativity, originality, and imagination and this makes for a great read.
That being said, this book is probably not for the weak of stomach. It contains brutally graphic violence to such a degree that even Michael Myers would approach the killer to say “You need some help!” The story takes place in modern day (1979), but it involves attempts to solve a string of brutal murders from 1936. There were several victims. The first was an insane artist, Heikichi Umezawa, who planned to murder his daughters/stepdaughters/nieces, etc. to create a perfect woman out of their body parts (!). He is killed in apparently impossible circumstances. There is another murder, but afterwards the main event occurs: the six girls Heikichi planned to butcher disappear, and six corpses are found one by one, each with a vital body part missing…
This book opens and right away tosses you in the bizarre, as you read a note written by Umezawa, in which he details his plan on how he will kill the girls and why. It is a grotesque, bizarre, and curiously fascinating sequence which immediately draws you into the action. Yes, there are portions where this book is gruesome, but for the most part, it feels rather like a Golden Age mystery come to life in modern day. The fact that the killings are from 1936 helps this along.
I am not Japanese, so I have to go by the limits a translation has to offer. However, if it does any justice to the original text whatsoever, Shimada is a writer. His skill is superb; he hides his clues excellently while parading them in front of the reader’s nose, and the solution is surprising—one of its aspects (I refuse to give a detailed hint) makes for one of the very best twists I’ve ever read. There are plenty of moments where you feel like slapping yourself in the head, with that feeling of: “OF COURSE!!! WHY DIDN’T I THINK OF THAT???” I had one nagging question about the solution, and I thought Shimada would leave it flapping in the wind unnoticed. To my surprise, he ended up addressing even this seemingly minor detail, handling it in a convincing way.
The story is a complex puzzle in the best tradition of Carr, Christie, Queen, and others, but the characters are also a delight. Shimada’s detective, Kiyoshi Mitarai, is wonderful, with a bit of a sarcastic sense of humour, but there’s nothing malicious or mean-spirited in him—I say this depiste the swipe he aims at Sherlock Holmes. (Kiyoshi, by the way, has got one of my favourite “A-ha!” moments. You know the scene: the detective and his friend, the Watson, will be walking along when the friend makes a casual remark: “The sky is such a lovely shade of blue today.” Suddenly, the detective shouts for joy and leaps into the air. “Oh, what a fool I’ve been! Of course! My dear friend, you’ve practically solved the case yourself! Why didn’t I see it before???”) Shimada’s characters are well-developed. The book is divided into 5 “Acts”, and in between acts 1 and 2, you meet a character inside a posthumous letter that advances the plot. He masterfully creates a figure that is torn by guilt; it is both simple and powerful.
I will be honest, however: the non-Japanese reader could get lost with all the unfamiliar names. However, Shimada has a list of all his characters at the very start of the book— should you get lost or if a name fails to click, you can always consult the list to refresh your memory. I had to use it two or three times. Still, you can’t blame a Japanese author for giving Japanese characters Japanese names. It’s like saying the only thing wrong with a musical is the music.
As you can probably tell, I loved this book. It is a wonderful example of excellent plotting and characterization, with a brilliant sense of the mysterious and the bizarre. It reads very much like a Golden Age mystery and is a wonderful example of the school of fair play detection we are so badly short of. I highly recommend this novel.