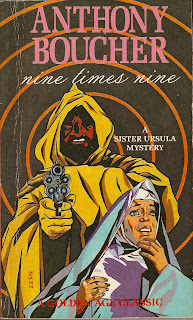 My acquaintance with Anthony Boucher (rhymes with voucher) has been limited to date. I mainly know him as one of the scriptwriters on the radio series The New Adventures of Sherlock Holmes, which was always a delight to listen to, even when Basil Rathbone left the show. Boucher and his partner in crime, Denis Green, came up with interesting problems for Holmes to investigate; although the mysteries themselves were often easily solved (after all, the episodes were less than a half hour long) they showed creativity in their scenarios. Overall, they were interesting expansions of references to un-chronicled cases throughout the Holmes canon. (Occasionally, they dramatized the original stories as well, such as The Speckled Band or A Scandal in Bohemia.)

I’m also aware of Boucher’s influential role as a mystery critic, but he was also involved in the world of science fiction. (You can read all that and more in the back of the IPL edition, which I own, where one "Burke N. Hare" gives a brief biographical outline of Boucher's life. Incidentally, the cover to Nine Times Nine is proof that Nicky Zann is a genius. After all, thanks to his genius, I bought that monstrosity, The Affair at Royalties. Awful, awful stuff. I'm still attending group therapy to get over it. But his cover is once again magnificent, and really intrigued me and intellectually blackmailed me to read this book.) But until now, I never read a novel by Boucher. This mistake has been rectified, as I’ve finished his excellent novel, Nine Times Nine.
There are so many ways you could describe Nine Times Nine, which is truly a delightful experience from start to finish. Boucher starts things off by dedicating his book to John Dickson Carr, my all-time favourite author. It reads very much like a Carr when the master was at the top of his form.
Boucher’s main hero is Matt Duncan, a very Carrian protagonist, who meets up with an old friend of his, Greg Marshall, at a bar on the Friday after Easter. Matt is upset because he’s lost his job, but Greg has real problems— the girl he wants to marry, “Concha” Harrigan, is about to be forced by her family (and that monster, Sister Ursula) into a convent! Horrors! Matt immediately goes with Greg to save the damsel-in-distress, but Greg overdoes it on the bottle and passes out, leaving Matt to confront not only the girl’s family, but also the family butler! Heavens! The mix-ups pile on top of each other, as the butler finally allows Matt inside (but at least he doesn’t call him “sir”!), Matt accidentally disturbs the wrong Miss Harrigan, accidentally offends half the family and finds himself thrown out. And that’s not even the end of the second chapter.
This is an extremely witty and clever satire on the work of John Dickson Carr. The book is extremely entertaining, with plenty of very funny jokes all over the place and hilarious mix-ups. Boucher, however, proves himself a versatile writer—he can do comedy, he can create a tricky locked-room mystery, and wow, he can write suspense, too! It's a three-for-one deal!
Boucher also manages to include a discussion on the infamous “locked-room lecture” from John Dickson Carr’s The Three Coffins. Basically, the police officer in charge of the case, Terry Marshall, goes home to his wife who has been reading a “marvellous” mystery which tells you all the possible solutions to a locked-room murder. Marshall can’t stand mysteries, but he suddenly sits straight up and demands to see the book. When Matt Duncan drops by for a dinner engagement he’d agreed on with Marshall, they discuss the lecture. It is a wonderful segment, which starts with the mystery-hating Marshall praising the book’s literary merits, and then morphs into a discussion of the case with every possibility being ruled out. At the end, nothing is left. The crime, for all intents and purposes, truly was impossible! (Ergo, the crime never happened. Q.E.D.) However, this section gives away a major hint as to the nature of the solution in The Three Coffins, so I would suggest reading Carr’s novel first and then going on to Boucher’s as a sort of companion piece.


Boucher’s detective is Sister Ursula, rather like a female Father Brown. I really like her character, but I am probably biased because my personal experiences as a Catholic give me an entirely new level of things to enjoy about her character (and some aspects of the book as well). I can definitely see bits and pieces of the real-life nuns I’ve known in my lifetime in her character, and it’s plenty of fun overall.
The impossible problem in this book is excellent, as a corpse is found in a locked room. However, minutes before the discovery, Matt Duncan glances through a window and notices a figure in a yellow robe inside the room! The victim, Wolfe Harrigan, was a debunker of cults, and the latest cult to have come to his attention was that of the Temple of Light, led by Ahasver, a bizarre fellow who believes yellow to be a degrading colour, claims Jesus imposed mandatory immortality on him, and also that the only true Gospel is that of Joseph of Arimathea, which makes some bizarre claims such as saying that Jesus spent seven years training in India. (Has he read The Da Vinci Code one too many times?) Anyhow, Ahasver claims he has committed the murder, but he was lecturing in front of his followers at the time! To this he claims he killed Wolfe via astral projection. Astral projection or not, it is a baffling impossible crime and Boucher fooled me to the very end. The explanation is both satisfying and very clever. Boucher not only gives the reader plenty of fun but also creates an intelligent problem with a cleverly hidden solution.
And you know, Nine Times Nine is such a quotable book. It just brings such a smile to my face to have such conversations like:
“And you think nuns are meek and mild?” Sister Ursula laughed quietly. “Some are, of course; look at Sister Felicitas. (Don’t think I’m embarrassing her—she’s deaf, poor thing.) But on the other hand—no, I won’t say any names; they wouldn’t mean anything to you and besides I shouldn’t. But there are nuns who could make the staunchest policewoman quail in her regulation boots.”
“Very well. I stand rebuked. I shall henceforth look upon nuns as holy terrors until proved otherwise.”
Or this:
“”You’ll never get a chance to forget it. Fifty years from now they’ll dig it out again for a caption: DAUGHTER OF MURDERED MAN BECOMES GREAT-GRANDMOTHER.”
“In only fifty years? My, the children didn’t lose any time, did they?”
Overall, here is Anthony Boucher’s report card:
Quality of the writing: A+
Likeable characters: A+
Sense of humour: A+
Quality of the puzzle, including whodunit and how: A
Level of fun: A++
Nine Times Nine is a wonderful book, a great take on Carr and its own mystery novel at the same time. I thoroughly enjoyed it.
Incidentally, this is the second novel in a row I’ve read which prominently features a nun. What would Dr. Sigmund Von Hornswiggle say?
[On a side note, do not be alarmed if my activity slips somewhat over the next few weeks. I have not been murdered. It’s simply exam season and studying takes precedence over reading, although I try to fit both in.]