That's my steak, Will!

Written by Patrick
Some of the most fun I’ve ever had while reading mysteries can be found in the pages of Rex Stout’s Nero Wolfe novels. Stout’s plots were often weak, but what made his novels so delightful were his characters and his dialogue. His main characters are Archie Goodwin and Nero Wolfe. Goodwin is a man of action, employed by Wolfe, an enormously fat man with a brilliant mind (and a spectacularly lazy person as well). Archie is like the traditional hardboiled detective, and Wolfe is the traditional “armchair” detective. The two are thrust together in the same novels and their banter is extremely fun (quite possibly the best aspect). Other characters are generally speaking well-defined, with plausible motivations behind their actions, and provide plenty of fun. And when Stout came up with a good plot, like he did in Too Many Cooks, the result is one outstanding novel. 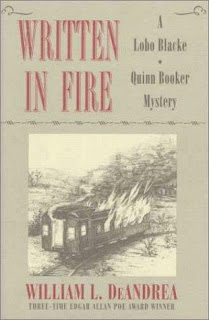 An author I recently reviewed for the first time, William L. DeAndrea, seems to have been heavily inspired by the work of Rex Stout. Someone commented on my Killed on the Ice review that the protagonist, Matt Cobb, is remarkably like Archie Goodwin, an excellent comparison I hadn’t even thought of. DeAndrea wrote quite a few other novels and died tragically young, before he was even 45. The world was robbed of an excellent and creative author. I can only imagine how much fun it would be to eagerly anticipate a new book of his…
But I’m getting ahead of myself here. The book I will be looking at today is William DeAndrea’s Written in Fire. This is a novel set in the Old West, and it reads very much as though Nero Wolfe and Archie Goodwin were the main characters. So if you like Wolfe (I do) and you like Westerns (Yes, sir!), this is a treat. (There would also be a sequel, Fatal Elixir. Which I just so happen to have...)
Actually, the book is quite insistent on the Wolfe/Goodwin comparison. It’s plastered all over the book: on the front flap, on the back flap, on the back cover— the only thing missing is a shiny gold sticker on the front cover shouting “IT’S LIKE THE NERO WOLFE BOOKS!!!” The comparison is a good one, but not entirely accurate. It’s as though Wolfe and Archie were put into a blender beforehand. You can see bits and pieces of their characters in both of our main heroes: Lobo Blacke (who is more like Wolfe) and Quinn Booker (who is more like Archie). Blacke is a man of action, a legendary lawman who was shot in the spine a few years ago, and is now confined to a wheelchair, which naturally doesn’t sit well with him. Booker is a fellow from the East, an author who once wrote Wild Western dime novels. He persuaded Blacke to let him write his memoirs, which sold very well. So he jumps at the opportunity to work for Blacke. Booker gets off the train, almost immediately runs into a gang of thugs, and jumps to the defense of a lady, teaching the thugs a few manners and making a few enemies at the same time. The interactions between Blacke and Booker are very fun— at times, Blacke seems to be an older and more experienced Archie Goodwin training a young, inexperienced Archie (Booker). (Blacke’s immobility, however, make him more like Nero Wolfe in the end.) Sarcasm and wittiness abound.
This really is a delightful mix between a mystery and a Western in the vein of The Man Who Shot Liberty Valance– you know, a man arrives in a small Western town to discover it is run by a tyrant. The tyrant is better dressed and behaved in this book, and the murderous thug Booker ultimately must confront is someone else, but the general idea is the same.
I almost have one complaint—there was a point in the book where DeAndrea seemed to make the same mistake he made in Killed on the Ice in terms of a romantic relationship that gets sexual too soon. But then DeAndrea turned the tables on me, and used his situation to set up an excellent joke. You have no idea how tempted I am to give it away, but that would just be cruel. Afterwards, a great angle is added that makes the romantic subplot even more interesting than it initially was! Well played, sir. Well played…
How is the mystery angle? Well, the plot is decent, and it involves some fair clues for the reader to spot. I wish I could say I was surprised, but I wasn’t that surprised. It did take me a while to figure out whodunit, but I ended up figuring it out nonetheless.
This is an insanely quick read, and DeAndrea tells his story well. He doesn’t pad it out unnecessarily, and the Western aspect makes for some really thrilling scenes. He had a good, exciting shootout in Killed on the Ice; he has an even better shootout in Written in Fire. Anyone who enjoys Westerns or who likes the Nero Wolfe novels will probably enjoy the book. I like both as it happens, and I loved it. I started reading this book last night before I went to bed, fully expecting I’d read one or two chapters and then go to bed. Before I knew it, I was at the 50 page mark, and it was way past bedtime.