Paul Halter impressed me considerably with his highly imaginative and interesting book, Le Roi du Désordre, which was flawed, but at the same time offered two really good impossible scenarios with a plot that kept my interest all the way into the wee hours of the morning. So perhaps it shouldn’t come as a huge surprise that I was anxious to read another Halter, and I finally settled on La Tête du Tigre (The Tiger’s Head).
I chose this book on the strength of an introduction penned by Roland Lacourbe to my Paul Halter omnibus, which contains Le Roi du Désordre and four other books. In the excellent aforementioned introduction, Lacourbe talks about Halter’s two main characters in his longest series: Inspector Archibald Hurst and Dr. Alan Twist. According to his introduction, when Paul Halter wrote La Malédiction de Barberousse, he was hoping to resurrect the career of the great Dr. Gideon Fell, but John Dickson Carr’s estate categorically refused to permit him to use the characters. So, with a bit of tweaking, removing the more obvious references, Dr. Fell became Dr. Twist, and Inspector Hadley became Inspector Hurst.
The story of their creation, however, proves to be far more interesting than the characters themselves. They are rather bland and ultimately nondescript—Twist is tall and thin (the opposite of Dr. Fell), but with a huge appetite. Hurst meanwhile perpetually complains that someone has placed a hex on him—how else to explain the murderers who come his way, making sure to kill their victims in locked rooms and other impossible scenarios? At the end of the day, though, I kind of like the detective duo; it’s a nice change of pace not to spend 70 pages concerned with the detective’s dysfunctional family life (and then another 30 reminiscing about an abusive childhood with a kleptomaniac Greek mother and an alcoholic father). They may not be three-dimensional, but what they lack in that category they more than make up for with their sleuthing skill!
La Tête du Tigre proves to be an enormous improvement on Le Roi du Désordre. The plotting here is more complex, and the stakes are higher. Halter divides his book into two parts: the first part seems to deal with more or less separate plot lines which slowly converge together, forming one narrative in Part II. The way he connects his cases is fabulous, and the idea behind the plot is equally wonderful.
The first storyline begins with the introduction of Dr. Alan Twist and Inspector Archibald Hurst. Twist has just returned from a vacation in France, and Hurst is worried; while Twist has been gone, a serial killer has struck, chopping women's limbs off, stuffing the limbs into suitcases, and leaving them at train stations, presumably making off with the torso and head, which makes the identification of the victims one hell of a chore. But it’s only a matter of time until a girl (of questionable virtue) named Jenny Olsen becomes the latest victim of “the suitcase murderer"—but the murderer has escaped under impossible circumstances! Tom Ross, Jenny's boyfriend, saw her enter her house with a figure he couldn't clearly make out. Angry, he resolved to drown his sorrows at the local pub with his friend Johnny White, who finally convinces him they need to get back there and teach the fellow a proper lesson about trying to get cozy with their girls. So back they go; the lights in Jenny's house are clearly on (some light is escaping through the closed shutters) and they hear water running inside. They find the front door locked, and they burst into the house. Johnny stays parked at the front door in case someone tries sneaking out while their backs are turned, and Tom goes to the bathroom to investigate. Nobody is there, nor is anyone in the kitchen, and there are only two hiding spots available in the main room- nobody is in either! Meanwhile, there is a crimson streak of blood in the bathroom, a pail with bloody water in it, and a cloth (apparently they surprised the murderer while cleaning up). Not only that, the water is no longer running! But strangest of all, the murderer has for no apparent reason littered the bathtub with flowers!
The second storyline takes place in the peaceful village of Leadenham (Halter gave his town a name this time!), a few kilometres from Oxford- it begins two months before the trunk murderer first strikes. We see the lives of several people chronicled, but among the most prominent is Major John McGregor, a bit of an old bore but not a bad fellow after all. He spends quite a bit of time reminiscing on his past in India, while the neighbours humour him. These include the newlywed Fortescues, Carol and Percival. Carol's father was the president of a bank, who died in a tragic car accident a few months ago, leaving Carol the head of the bank. She knows nothing about the business and as a result, Percival finds his workload at the bank dramatically increased. Their relationship, at first warm and passionate, has become cold and rather emotionless. (Carol is a far more interesting character than Sibyl of Le Roi du Désordre, though she's not quite three-dimensional.) Another house is home to the vicar, Rev. Edmund Duncan, and his wife, Mary- I'm afraid they are a far less interesting couple. Major John McGregor is a fun character, and his n'er-do-well tennis-playing nephew (*gasp* A tennis player?) is visiting for a bit with his fiancée, Evelyn Marshall. Finally, we have a pair of tourists: Clive Farjeon (sounds like more of a French name, really) and his fiancée Esther Dove. 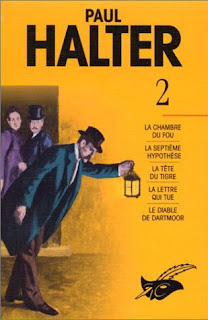 Anyhow, Major McGregor tells a story about the titular Tiger's Head, a thick bamboo cane with a bronze tiger's head on top. He claims that a fakir in India gave it to him, and warned him that the Tiger's Head was actually home to a Djinn! Unlike the genie of Aladdin, though, this Djinn is a far more malevolent sort, attacking particularly those who just so happen to not believe in its existence. When he told this story to two of his friends, they laughed at him and decided to test this trick out. The three locked themselves in a room together, and Major McGregor rubbed the tiger's head, when suddenly, the form of the Djinn materialised in the corner, grabbed the Tiger's Head, and proceeded to beat the two friends.
After Major McGregor finishes telling his story, Clive Farjeon laughs, declaring the whole story is nothing but hogwash. McGregor puts forth a bet: they will lock themselves into a room that is first thoroughly searched, with witnesses posted at every single possible exit, guarding it to ensure there's no "assistance" to the hocus-pocus. If the genie does not appear, Major McGregor will never again reminisce about India, and, furthermore, will offer Clive the Tiger's Head. Clive accepts this bet, and the witnesses to the bet all assist in searching the room. Nothing is found, and so they all take up their posts...
At this point in the story, Dr. Twist and Inspector Hurst, who are mulling over an anonymous letter denouncing someone living in Leadenham as the trunk murderer, get a telephone call. Major McGregor has been murdered, found bashed to death once the room was unlocked, with Clive unconscious nearby. And all Clive can say in his defense is that he saw the figure of a genie materialise in the room and come after the Major...
This second locked-room mystery is quite wonderful, with a really interesting and plausible solution. The first impossible situation has got a little more far-fetched a solution, where the killer relies on too much luck, but it’s an interesting idea nonetheless. Meanwhile, Paul Halter’s plotting is breathless— he makes sure the reader will not easily be bored!
But then, with 100 pages to go, the problems begin occurring, which ultimately bring the book down in quality. There’s a rather pointless bit of plot where two witnesses tell conflicting tales, and it forms a sort of “My word vs. yours” plot which frankly feels like it’s just there to pad things out. Although it furnishes either a major clue or a colossal red herring (I refuse to say which), it would’ve been far more effective to save this for the scene where Dr. Twist wraps everything up. There’s another problem— one of the plot strands involve a series of mysterious assorted thefts, with a thief making off with everything from a screwdriver to a church candle. The resolution to this plot strand is underwhelming, with certain characters’ actions bordering the inexplicable. The book’s plot is fascinating, but ultimately flawed, especially in these areas. However, it’s a relief to say that everything is relatively well-clued this time— there was an attack/attempted murder in Le Roi du Désordre which was not clued fairly at all.
I have one distinct disadvantage reading in French: French is my third language. In fact, before reading Le Roi du Désordre, the last French book I read was over a year ago in a French class, where the words were so obscure I was rushing over to a dictionary after every other sentence. As a result, I’m not the best person to talk about Halter’s writing style— for all I know, it could be a recombination of clichés the average French reader sees thousands of times each year. However, I enjoy Halter’s style, which is economical and can produce genuine chills sometimes, such as the Major’s story about a bizarre variation on the Indian Rope Trick. He also has an interesting sense of humour, which shows up in the very first chapter, where the unknown suitcase murderer decides to play a nasty prank…
The English village setting is not particularly convincing, and once again, Paul Halter decides he’s not going to develop his characters very much. So if you demand three-dimensional characters that leap off the page, you’re in the wrong place. Fortunately, I don’t necessarily require this—Halter’s plotting is so dexterous and his imagination so fascinating, I am ultimately along for the ride just to see where the plot is headed!
I maintain that Carr was the superior author—his atmosphere, settings, and characters are usually far better than those I’ve seen from M. Halter. (Both authors have the same weakness in characterization, curiously enough, but I think Carr was more adept at it than Halter, whose English characters come across as rather thinly veiled French ones.) But their ultimate mastery was in plot—and Halter has shown that he has enough imagination in his storytelling to make the Master himself jealous.