The Incident of the Pickled Herring 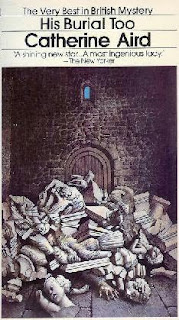 Catherine Aird is an author who intrigues me. Ever since browsing the excellent catalogue of The Rue Morgue Press, I’ve wanted to try her work. The Religious Body sounds like a riot— with a murder taking place in a convent and the nuns being forced to have contact with the outside world. All it sounds like it needs would be an elderly nun detective and a priest, both mystery enthusiasts, sitting down trying to figure everything out. Well, I might get to The Religious Body someday, but I decided instead to start off with His Burial Too.
It is an interesting book at first. It starts with a bizarre opening, as a fellow named Richard Mallory Tindall does not return home, worrying his daughter and the housekeeper. The police send out Inspector Sloan to investigate, against his will— he insists, after all, that it’s not a crime to not show up at home for the night. Sloan, much to his despair, is paired up with Constable Crosby, a fellow who gives you the feeling that the lights are on, but nobody’s home. The opening feels rather pointless, to be frank, but things get really interesting when the man’s car is discovered in the garage. Something must have happened to prevent him from entering his house! But what?
It is just a matter of time when workers at a nearby church report a dead body to the police, and Sloan buzzes off there, since every other police officer is currently being used as a traffic light. (Fate seems to really have it in for him, forcing him to team up with Crosby like that.) As it happens, an extremely heavy statue was moved into the church tower while the workers were installing some central heating (at the request of a dead man who never forgot how cold it got in church as a boy). Some poor fellow, who seems to have been Tindall, was in the tower when the statue toppled over and crushed him to pieces. But what exactly happened? Was it suicide? Why, when there is a perfectly nice bridge and a nearby river? An accident? Unlikely— the workers all insist the statue was quite stable. So it had to be murder—but the statue crushed into so many pieces, the doors to the tower are completely blocked off with marble (over a ton), only able to open an inch or two! In fact, the door has to be welded off! Yes, dear friends, we have ourselves an impossible crime!
When it comes to that, the impossible crime is a damn fine one. The killer’s trick in this book is a very good, plausible one. This is what makes His Burial Too an interesting read: the impossible crime is phenomenal. Also, Catherine Aird, a post-GAD author, plays rather fair with her clues, which is a tremendous relief. Having Aird tell her story with a good sense of humour only helps matters along.
But the book suffers, as its second act sags. It is an uninteresting mish-mash of ideas, involving everything from corporate espionage to jewellery. I enjoyed one of the garden paths the police had to take, but to be fair, by a certain point in the novel, things began to get dull. This is because the killer’s identity became too obvious. The reasons why X has to be the killer call attention to themselves too much, and so, while the police are investigating the mysterious incident of the pickled herring, you feel like shouting “You fools! Focus on the anomaly of the salted fish!” Also, I was never fond of police procedurals, and I got rather bored of this angle early on.
So we have a curiosity here— we have a book which sags in the middle section, but its impossible crime is excellent! So do I say “skip it” or do I recommend it?
Well, ultimately, I feel forced to recommend it. The impossible crime angle makes everything seem worthwhile in the end. Also, Aird tells her story with humour, so even when it sags, it at least isn’t entirely without merit. There is a pair of spinster sisters, for instance, who suddenly switch into predator mode whenever an eligible male enters their house— practically grabbing poor Crosby and pulling him into their house, eagerly anticipating the questioning session! It’s a short segment, only about two pages long, but it’s quite humourous.
So, ultimately, this isn’t a bad book, but it desperately needs a better second act. Still, it’s a relatively early book in Aird’s writing career— my only hope is that she got better as time went along!