Pig of Many Lives 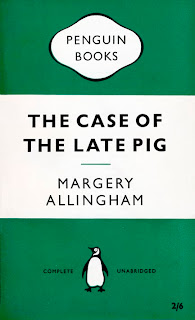 Although The Case of the Late Pig has points of interest, I’m not entirely convinced it is a great starting point for newcomers to Margery Allingham. It is an enjoyable read, and in many ways a black comedy. It is a remarkably short book, barely over short story length. The edition I have is a 138-page Penguin. So the book practically flies by, and it’s amusing and so on. So what’s wrong with it?
Well, to be honest, I’m not entirely sure what, if anything, is wrong with the book. But I do know this: it was a confusing introduction to the Allingham universe. Perhaps it is because this is such an uncharacteristic novel for her. From what I can discern, it is the only time a book is narrated by Albert Campion, Allingham’s sleuth. He’s a fun enough type, who feels rather like a parody of Dorothy L. Sayers’ Lord Peter Wimsey, but something about his narration is just… off. Then there are the various supporting characters, and some of their roles still have me confused. I’m not sure if they’re recurring characters, one-offs, or what. Allingham’s stylistic traits, as recounted by her sleuth, just seem odd and ended up confusing me in a few segments.

However, the plot is a fun one, as Albert Campion begins the story by attending the funeral of an old school chum. Well, perhaps “chum” isn’t quite the word. Pig Peters was a notorious bully back in the good old days at school: “Pig Peters was a major evil in our lives at that time. He ranked with Injustice, The Devil, and Latin Prose.” Not surprisingly, nobody is really broken up about his passing, and his funeral has a really low turnout rate.

Campion forgets about the whole event, but months later, he is summoned back to the village where Pig’s funeral takes place. See, there’s been a murder, and as it turns out, the victim is none other than Pig Peters! But how has Pig pulled off this miracle, and managed to die twice? It’s an impossible crime… sort of. Allingham really misses an opportunity to drive home an impossible crime aspect. Later, when Pig’s body disappears out of a locked cottage used as a temporary morgue, Allingham misses a second opportunity to use an impossible crime. Maybe it’s just as well. Considered as an impossible crime story, both the situations really are lacking. Overall, the story is enjoyable, although some editions give away a major revelation on the cover.
The culprit is actually really easy to spot, and the method isn’t particularly interesting. There are elements of cleverness in the solution, such as why the murderer chose to strike when he or she did, but for the most part, it’s merely O.K.
I enjoyed Allingham’s writing style. She seemed to have a nice sense of humour; note, for instance, her description of a nondescript person:
“”I don’t know what he looks like, except that he presumably has a face, since it would be an omission that I should have been certain to observe.”

I found that rather humorous, as Allingham, not content with the usual bland/nondescript/forgettable route for descriptions of this sort, comes up with a unique way of describing such a person.
However, I suspect I would have enjoyed this book more if I had more of an idea what was going on with Campion & Co. As I was entirely unfamiliar with the series, starting with an unconventional book that uses its detective as the narrator was probably a mistake. There were times where I wondered if Janet had been in an earlier novel (and if so, what was the backstory there), or who the devil Leo was anyways.
Overall, it’s a quick, humorous, and enjoyable read— but it was undoubtedly the wrong book with which to start reading Allingham.