Nobody invited the fourth detective...

Written by Patrick
“It has become a game, a mere game like chess, this writing of murder mysteries. While in real life, it is no game, but something quite simple and savage, with about as much mystery wrapped round it as that piano leg. And that’s why I’ve no use for detective fiction. It’s false. It depicts the impossible.”
…
“That may be so. But I enjoy the game. It has, as you say, become far more subtle lately, and no one can guess the murderer till the last few pages. But after all, we expect fiction to transcend life, and a murder in a book to be more mysterious than a real one.”
—Alec Noris and Sam Williams in discussion, Case for Three Detectives 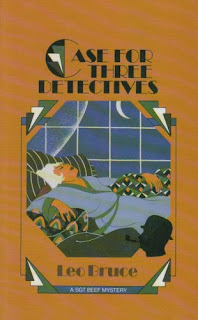 When I wrote my review of Paul Halter’s novel Le Tigre Borgne, I was convinced that it would be my last review before I left for a three week vacation on Monday morning. But, as it turns out, my next read, Case for Three Detectives by Leo Bruce, was such a delightfully quick one, it simply flew by!
It seems so horrible, doesn’t it, to discover one’s hostess dead? Yet that is precisely what happens to Mr. Townsend, the narrator of the story, who along with a group of his fellow guests, have a discussion on the merits of detective stories. It seems like an innocent discussion, but things take a dark turn when Mary Thurston, Dr. Thurston’s wife, is found in her room, with the door bolted shut and the windows closed, murdered… From then on, Townsend is thrust into an investigation involving ingenious false alibis, ropes, rats, apples, box rooms, and the like, as three detectives found their way onto the scene of the crime to do some proper investigatin'.
The “three detectives” the title refers to are spot-on parodies of some of the most beloved names in all of detective fiction. First, we have Lord Simon Plimsoll, a clear parody of Dorothy L. Sayers’ Lord Peter Wimsey. He has an enormous book collection (but is quite modest about it), shows himself to be talented in nearly everything, has a manservant named Butterfield (clearly a poke at Lord Peter’s Bunter), and for some unexplained reason, just about everyone liked him. (Some of Lord Simon’s dialogue, for instance, reminded me uncannily of Sir Henry Merrivale, such as when he says solving crimes is as easy as shellin’ peas.) 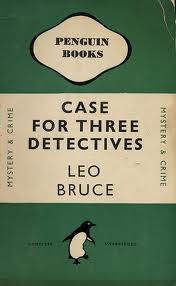 Next up is Monsieur Amer Picon, an eccentric foreign detective, and a parody of Agatha Christie's Hercule Poirot. His dialogue is spot-on, with Picon routinely butchering English idioms, being surprised at the uses of certain phrases, and of course, being incredibly vain and having a sort of compulsion for order, method, and neatness.
Finally, we have Monsignor Smith, who just like G. K. Chesterton’s Father Brown appears entirely innocent, muddle-headed, and the like, but uses his insight into human nature to solve his cases. He also has an uncanny way of delving into the philosophical and religious: “But there are so many kinds of wings … there are the wings of aeroplanes and of birds. There are angels’ wings, and … there are devils’ wings.”
With such three eminent detectives at hand to solve a locked-room mystery, Scotland Yard is only too glad to have their assistance, and the local policeman, Sergeant Beef, is cast aside as unnecessary. What good can the poor police do if there are such great detectives on hand to solve the case? Beef, meanwhile, is rather cheesed off, defiantly declaring “I know who done it!” And each of the three detectives gives their own solution to the crime— each perfectly ground in logic and reasoning, and each perfectly plausible. The only thing is… they all get it wrong, and it is Sgt. Beef who solves the case at the end of the day.
This is a delightful satire and parody of the mystery genre, lovingly pointing out its flaws while also partaking in the fun. It is somewhat like a 1936 Scream, if Scream was a book and was poking fun at mysteries: while it is a very funny parody, it is also a good mystery of its own, with four separate solutions to the crime, each of them ingenious.
And yet, in a way, that is Leo Bruce’s undoing. The three detectives have such brilliant theories, all based on conjecture, but it is Sgt. Beef who solves it, using clues the reader can’t use, such as fingerprints and handwriting. (These are not necessarily the clues used in the book, but they are good examples of the kind of clue I’m referring to.) Not only that, Beef’s solution is the worst in the lot, because it’s quite frankly boring, and the first solution that entered my head when the locked room crime was discovered. I was hoping for something a little more interesting and ingenious.

Case for Three Detectives is worth reading is its spot-on, extremely funny satire and parody. There is a moment, for instance, where Townsend reflects that in every mystery, he suspects everyone but the actual killer, and since he’s determined to keep up with the detectives, he will remedy this by suspecting everyone. The three detectives are wonderful, and their solutions are all ingenious and of the sort the detective being mocked would discover. Overall, it is a brilliantly funny and quick read. I highly recommend it. Just don’t expect the locked-room angle to be the best you’ll ever read of.