Opera can be murder... 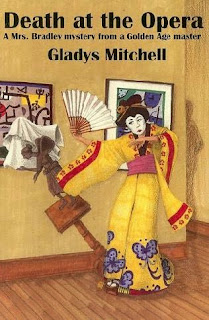 The copy of Death at the Opera that I read is introduced by Clare Curzon, who makes an excellent point that there are two ways to react to Gladys Mitchell. The first is an exclamation of delight along the lines of “Ah, Mrs. Croc!”, and the second is the same exclamation, but with exasperation instead. Having finished my first novel by Gladys Mitchell, I think it’s safe to include me in the first group of readers.

From what I can discern, Mitchell’s books tend to have wildly imaginative plots, as her reptilian sleuth Mrs. Bradley investigates this-or-that, but the flaw everyone seems to point out is her tendency to go for poor, weak conclusions.
Fortunately, this is not the case for Death at the Opera. The identity of the culprit is genuinely surprising, and there is fair play involved, playing fair with the clues. I have a bit of a complaint, however: there is only one real clue. Granted, in retrospect, it’s so obvious I’m surprised I missed it, but it is the only real thing pointing to X as the killer. I would have liked to see a ladder of evidence which collectively points to X (and only X) as the culprit, but the solution is very clever and interesting, so I forgive its somewhat weak (yet fair) clueing.
Mrs. Bradley is an interesting character. “Mrs. Bradley, smiling in a way that reminded him oddly of the picture of a dragon which used to alarm him when he was a child, made no remark…” She is a collection of grotesque descriptions, with hands that are often described as claws, and a laugh that is more of a sinister-sounding cackle. And yet, paradoxically, she is also described as an attractive lady, and children like her quite a bit. Obviously, casting her in a TV production would be a challenge, as the actress would have to fit all the qualifications. (From what I’ve heard, Diana Rigg was terribly miscast in a series of horrible adaptations. And just looking at the cast list for the adaptation of Death at the Opera, I recognized almost none of the names— hardly a good sign when the screenwriters feel they absolutely must change all the characters’ names. It shows the level of respect the original work is given. In fact, once I read the summary of the episode, I resolved never to give this television series so much as a try. It can be nothing but a travesty, as it completely rewrites the original plot— and if the new one was any good, it could have been sold independently of the Gladys Mitchell name.)
Mitchell’s skill at character is not merely limited to her fascinating sleuth, however: all these characters are absolutely fascinating, and their interactions, petty quarrels, and romances are genuinely interesting. She also has two prominent student characters, who are realistically portrayed. (Apparently, Mitchell had a long teaching career, and perhaps this aided her when it came to writing these characters.) Heck, she manages to include a subplot about the boy (almost eighteen), who is hopelessly in love with a teacher, attempting to kiss her and even fantasizing about sexual encounters with her in his dreams. And yet it is not disturbing—the last detail is subtly thrown into the mix, and yet clearly it is what is going on. Mitchell does not feel the need to psychoanalyze the young man with his hopeless romance, nor does she have to point the finger of blame on society, nor does she linger too long on angst.
In short, Mitchell can write without needlessly padding out her book. All her characters are interesting, and yet at the same time, they are grotesque exaggerations in a topsy-turvy school world. This “revolutionary” school believes in co-education and not disciplining children. Punishing a student in any form is discouraged. At the same time, the discipline for the teachers is quite strict. At the very beginning, a teacher goes off on a tangent about a student at a staff meeting, when everyone shouts “Shop!!!” and she is forced to fork over a shilling. It is a mad, yet wonderful place. The schoolhouse atmosphere is grand— nothing here feels contrived, and as a student, I feel qualified to say that this school feels like a real, brick-and-mortar school. This element is excellently pulled off, and I get the feeling Mitchell was drawing on her experience as a teacher for this.
Another element of the plot is a theatrical subplot which occupies much of the novel’s first act, as the school prepares to perform The Mikado, financed by the inoffensive Miss Ferris, who is cast as “Katisha” in recognition of her generosity. This sparks a bit of a quarrel between certain characters, and I can testify from my acting experience that the quarrel feels quite genuine. We follow the production as it is slowly born, from casting to a disastrous dress rehearsal to a wildly enthusiastic reception on opening night. It is not a strict theatrical mystery, as the second half of the novel entirely moves away from this aspect of the plot, but the brief glimpses of a school’s theatre are marvellous nonetheless.
I feel I must mention here that Death at the Opera is not just one mystery— it is two mysteries, excellently connected together and yet separate of each other. This adds to the complexity of the plot, and, truth be told, I like it. Both the mysteries are good, although the second is more of an inverted serial killer tale. We know who the serial killer is and we are treated to his thoughts, which make for a fascinating character study…
Overall, I highly enjoyed my first foray into Gladys Mitchell, and ultimately have nothing but praise for her. Around the 30 page mark, there was a marvellous sequence where a character, whose guilty secret has been discovered, is at first relieved that only “harmless Miss Ferris” found out, but after brooding on this, they become alarmed that “harmless Miss Ferris” is not so harmless after all. That is the point at which I felt a click with Gladys Mitchell— the same click I felt with John Dickson Carr, and the same I felt when I first read Edmund Crispin. It is that sensation of immediately falling in love with an author, and the feeling did not dissipate during the rest of the novel…