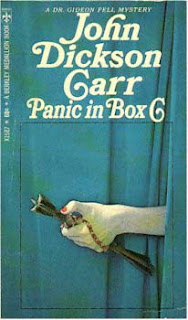 It is a peculiar irony that, although I always claim John Dickson Carr is my favourite mystery author of all-time, I have not yet reviewed one of his novels on my blog. When I decided to begin this blog, I just missed the opportunity of writing a post on Carr’s brilliant tour-de-force, Fear is the Same. I don’t want to blaze through what little Carr is left unread by me, which is why of late I’ve spread out my Carr reads. However, I have abstained from Carr far too long by my estimation— I just turned 18 last month, and I decided (as a belated gift to myself) to treat myself to a John Dickson Carr trio. This is the first of these novels: John Dickson Carr’s Panic in Box C.
Lady Tiverton, before she married the late Lord Tiverton, was an actress named Margery Vane. As a young girl of 18, she bewitched the famous ageing actor Adam Cayley, who created a theatre company and determined to perform Romeo and Juliet, with him and his beloved in the main parts, despite his being over 60. He dismissed the doctors’ warnings about his weak heart and subsequently died onstage. The company subsequently failed and eventually disbanded. Margery Vane went on to have a rather successful career before retiring.
Now, years later, she returns to the old town with the theatre where Adam Cayley died. The theatre has been newly restored, and under the direction of the brilliant Irish actor Barry Plunkett, a new generation of actors plans to succeed where Adam Cayley failed, putting on a new production of Romeo and Juliet, with Margery Vane sponsoring the show. And it is during a dress rehearsal of Romeo and Juliet that Vane is discovered in her private box, with the door bolted behind her… murdered with a crossbow bolt. And if that wasn’t enough, the killer could not possibly have fired it and have the bolt go through her back the way it did— yes, my friends, it’s an impossible crime!
And who better to investigate the impossible than that marvellous Chestertonian genius, Dr. Gideon Fell? He is brought in to solve the case alongside his writer friend, Phillip Knox, who is already present, having reunited with his estranged wife, Judy. They separated almost 20 years ago, but never got around to getting a divorce… Dr. Fell is in decent shape here, but his cryptic mutterings are disappointing. I looked forward to seeing how and old-time baseball player’s name was a clue to the impossible murder, but as it turns out, the name was never a clue at all, but Dr. Fell gives a long-winded explanation for why his muttering of the name constitutes fair play. (It leaves a lot to be desired.)
The secret behind the locked-room murder is ingenious. It managed to elude me; I don’t recall Carr using this trick before. Unfortunately, there’s a catch: the murderer relies on a lie told by another suspect, a lie so idiotic and motiveless it not only makes the killer’s identity anticlimactic, but it makes the other suspect look like a moron.
I usually enjoy Carr’s humour, but it is confoundedly weak in Panic in Box C. There’s a sequence in a bar, which involves several people singing college songs, including the mayor (a Harvard man). You can tell Carr is trying to be funny, especially when a miniature riot breaks out, but it just doesn’t work at all. It aims to send the ball flying out of the park, but ends as a rather embarrassing strike. 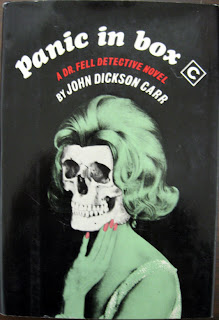 The theatrical atmosphere is convincing, but not brilliant. Perhaps it doesn’t help that I played Friar Laurence in a production of Romeo and Juliet... Our cast got pretty crazy at times, but there was nothing like the shenanigans these actors get into.
Historically, Carr’s great weakness was characters, and the ones in Panic in Box C aren’t an exception. They’re an uncommonly dull lot, even for Carr, and the romance between Phillip Knox and Judy is ridiculous from start to finish. They bicker over silly trifles and it’s obvious that they will end up together. And there are some odd things about this book. Some people might be alarmed at the jokes some guys exchange about hitting one’s woman to “keep her in line” and when Barry Plunkett refers to his lady-friend as “my dear fornicator”. However, Carr was against violence towards women. In his work, when someone hits a woman, he is almost always portrayed as a thoroughly despicable villain.
In conclusion, Panic in Box C is really mediocre stuff for Carr. The solution for the locked room shows only some of his cleverness, while his weakness in character is more apparent than usual. It’s readable, but far from Carr’s best.
Still, when you stage Romeo and Juliet using authentic swords, daggers, and crossbows, you’re just begging murder to come in and stop the show.