Written by Patrick
When the night wind howls in the chimney cowls, and the bat in the moonlight flies,
And inky clouds, like funeral shrouds, sail over the midnight skies –
When the footpads quail at the night-bird's wail, and black dogs bay at the moon,
Then is the spectres' holiday – then is the ghosts' high-noon!
— Sir Roderic Murgatroyd, Ruddigore 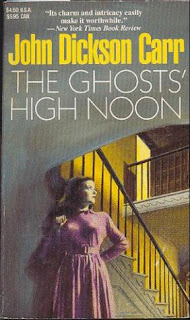 The best part about John Dickson Carr’s The Ghosts’ High Noon is probably the title. Those words are absolutely brilliant, conjuring up ghostly images appearing in dark shadows, with a full moon in the sky… Unfortunately, the rest of the novel falls short of this brilliance. Which isn’t to say the novel is bad; in fact, it’s rather good stuff. It’s a good effort overall by Carr, but it fails to cash in on the promise of ghostliness the title makes.
The novel takes place in 1912 New Orleans, and Jim Blake is its hero. He is a reporter-turned-author, who wrote a best-selling thriller, The Count of Monte Carlo. He is sent on a special assignment to New Orleans, to come up with an article on Congressional candidate James Clairborne (Clay) Blake. Strange things begin to happen, as Jim is convinced someone is following him in Washington. On the train, someone knocks at a compartment he is occupying, but when he opens the door, nobody is there, and two railway officials on opposite sides of the hallway are willing to swear nobody went by them! Things culminate when Jim’s friend Leo Shepley recklessly drives his car into an abandoned shed: a gunshot rings out inside, and when witnesses rush to the shed, Leo is lying on the floor, a gunshot wound in his head… with no gun anywhere in sight!
Yes, it’s another impossible crime novel spun by the master! Unfortunately, the impossible situation on board the train is a major disappointment: one of the worst tricks in the game and one I’m surprised Carr stooped to using (considering a far better train disappearance is worked in Castle Skull). The second impossible situation, the murder in the shed, is excellent. The solution is very clever, but at the same time, Carr stretches believability here and there with certain people’s incredible gullibility. Some editing was called for— it’s like X telling Y: “Hold on a second. I’ll go get a snack,” only to walk into the washroom.
The murderer’s identity is excellently concealed until Carr drops such a whopper of a clue that it points at whodunit too clearly. His other clues are far more subtle, but their purpose is almost wasted when such an obvious pointer is given.
Meanwhile, the romance in The Ghosts’ High Noon is far more successful than in Panic in Box C. This is because Jill Matthews, Jim Blake’s romantic interest, is a mysterious figure for much of the book, popping up at suspicious times, obviously attracted to Jim and yet unwilling to tell him about herself. The character isn’t particularly good, but she cloaks herself in an appealing shroud of mystery that makes the weak character forgivable.
Far less forgivable is the historical colour, or rather, the lack of it. Carr was usually top-notch at this, but he didn’t bring to life the time period he himself lived through well at all. It consists of launching historical stuff in your general direction: look! Teddy Roosevelt is in the news! By the way, Gilbert of Gilbert and Sullivan died last year. Buy the new 1912 Cadillac, with an automatic starter (Lummy, ain’t she a dream, Bert?)… Drink Coca-Cola for 5 cents a bottle! And so on. It just isn’t very colourful, which is ironic, since Carr usually excelled in this aspect of his historical mysteries.
I might as well mention that the climactic scene, just before the killer is unmasked, is unreasonably thrilling, involving a late-night car chase with the cars available in 1912… 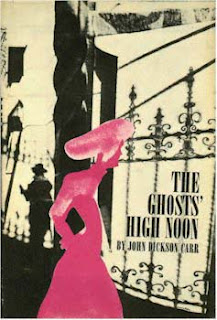 John Dickson Carr wrote a lot of radio scripts during his career, and unfortunately, you can see his work on radio far-too-clearly in the characters’ dialogue. Consider this bit when Jim Blake catches Jill Matthews after she trips at the train station:
“With my right hand I turn the knob of the door. We push through, we turn a little to the left, and... here in this aisle I set you down.”
Yikes. All that’s missing is sound effects. This dialogue, even for Carr, is horrific.
Ultimately, The Ghosts’ High Noon is a flawed but decent enough effort from Carr. Unfortunately, you get the feeling that this isn’t the same man who wrote The Red Widow Murders: what is conspicuously missing is an atmosphere of adventure lurking behind every corner. Carr was obviously getting tired of a modern world he neither liked nor understood, a sentiment clearly echoed in the novel’s final sentences…
“Every generation, Jill, has a grouse against the preceding generation. At the moment we’re young and full of beans. But one day, before too many rolling years have whitened our heads, we’re going to be oldsters ourselves. What will they say of us?”
“They’ll say … we were prudish and (what’s the new word?) inhibited. That’s it! They’ll say we were so prudish and inhibited we couldn’t have enjoyed ourselves at all! That’s what they always say, isn’t it?”