The Adventure of the Magical Murderer 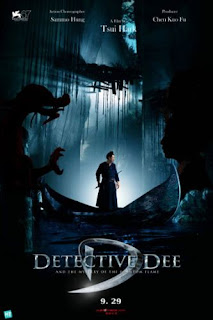 I stumbled over the film Detective Dee and the Mystery of the Phantom Flame by accident, as I was looking up an adaptation of Robert Van Gulik’s The Haunted Monastery. The film seemed okay, but the trailer rather turned me off. It didn’t seem like my kind of movie. Well, I was wrong… but I was also right. This movie is a strange mixture of stuff I really like and stuff I don’t care for at all.
The idea for a plot is a really darn good one. As Wu Zetian prepares to be declared Empress, a series of spontaneous combustions occur that threaten to ruin the coronation. Detective Dee is released from prison, where he was thrown 8 years before for treason, and he is ordered to track down the criminal and serve justice.
The impossible problem behind the spontaneous combustions is a disappointment, though. The film relies on elements of magic and fantasy for the plot to work— it embraces these elements and actually manages to make a fair-play detective story out of it. My problem is not so much with using the fantastic elements, but more with the rules of the game never actually being explained. So instead of a murderer who’s fiendishly clever in creating a murder method, we get a murderer who just grabbed the first magical item lying around. In a word, the explanation is weak. We are never told just how the fantastic elements in this film work, and by the end we still don’t know quite how they work. When the credits roll you walk away with a seed of dissatisfaction gnawing away at your mind. Look at Isaac Asimov and The Caves of Steel: he took pains to describe his futuristic world in great detail, even providing false solutions and explaining why they wouldn’t work in his world. The science fiction there works so well because the rules of have been established and the reader gets a fair shot at cracking the case. Admittedly, it’s an easily cracked case, but its determination to play fair makes it more interesting than the crime in this film. (Then again, the culprit it easily discovered in this movie, too, so that’s another point in Asimov’s favour.)
Apart from that, the film’s fantastical elements are generally well-handled. But there’s a major problem, as in the middle of the film, we get an extremely protracted fight scene. The reason for this is explained with just one sentence in the dénouement. We don’t get a flashback or anything—in fact, the explanation is only incidental, as something else is explained and we’re meant to assume it applies to that as well. It’s pretty weak. 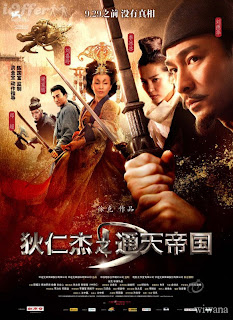 The CGI is a mixed bag. Most of the time, the visual effects are stunning— and at other times, it’s incredibly fake, especially when a bunch of deer are being animated with CGI. It just feels so out of place, as though it stepped out of the latest Pixar movie.
The fighting is certainly impressive. The fight choreography is interesting, especially right around the climax where a new element comes into play for Detective Dee. (Sorry, I don’t dish out more specific spoilers!) Unfortunately, sometimes the movie doesn’t know when to stop fighting and just breathe. In the middle of the movie, we get a fight scene that is far too long for its own good. It starts off kind of cool, gets more and more boring as time goes on, and by the end is just monotonous. It seriously affects the pacing for everything that follows—the climax, which is insanely awesome at times, doesn’t feel nearly as important after the huge fight scene we just witnessed not half an hour ago. The longest fight, I think, should be reserved for the movie’s climax, where the stakes are highest and it’s a duel to the death— it should be the most challenging. The fight in the middle of the movie seems to have no motivation whatsoever and just derails the movie’s narrative flow. It also lasts about as long as, if not longer than, the climactic fight.
So, do I recommend Detective Dee and the Mystery of the Phantom Flame? Well, it entirely depends on your viewing preferences. Do you prefer having a rational explanation instead of one relying on fantasy? Do you like to know how the fantastic elements in a movie work? Are you all for full-out fighting, complete with people who jump longer distances than I run in a year? Think about it and decide for yourself. Me, I wouldn’t scramble to see this movie again. It’s somewhat interesting but it’s really flawed, and its mystery/fantasy crossover is very problematic.