The Case of the Slaughtered Spacer 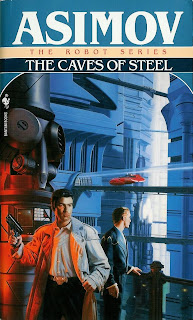 I’ve really been on a roll lately with both my reading (hey, I’m on vacation!) and my book choices, with several brilliant reads of late like Le Diable de Dartmoor, The Murder Stone, Shackles, or The Devotion of Suspect X. This trend continued when I picked up Isaac Asimov’s The Caves of Steel from my shelf.
The Caves of Steel takes place about three thousand years in the future. The course of civilisation has been forever altered by two technological advancements: space colonization and the creation of the positronic brain. In this futuristic world, which Asimov describes with detailed precision, a murder takes place, as an eminent scientist is killed while working on an advanced robot. Asimov creates an interesting impossible crime scenario, the details of which I’ll let the reader discover on their own (as I find that attempts to describe it suggest the solution too clearly).
Asimov must have been proud of his work. His mystery relies on the science fiction elements to take place. However, the impossible crime is not nearly as impressive as I’d hoped—there are clever pieces of misdirection that almost trapped me, but the central idea behind the impossible crime trick is extremely simple and easily deduced. However, two brilliant false solutions are first offered and then disproved, adding to the problem's intriguing nature.
This book is something of a landmark in the mystery realm. This is a straight-up mystery with a definite science-fiction flavour. Some passages that seem like they are purely symbolic or “science-fiction”-y diversions can contain cleverly masked clues or red herrings. And furthermore, this is a classic GAD-style plot, with all the clues given to the reader… taking place in a future with advanced humanoid robots, brain scanners, and the like. With a mystery working in such a technologically advanced world, it pretty much proves that if authors like John Rhode were around today, we could expect them to create ingenious false alibis using the Internet, cellphones, and the iPad2.
Asimov’s universe is a fascinating one. In it, people are forced to live in cities, which are giant mega-cities by our standards (the average population is 10 million). These are completely enclosed—the titular caves of steel, if you will. The Earthmen are thus cut off from the outside world, though “Medievalists” preach that they need to return to the soil. Asimov explains why, with a population of 8 billion, this kind of thinking just doesn’t work. He carefully chronicles the tensions between the Earthmen and “Spacers” (descendants of those who have colonised other planets).
Also, you can tell that Asimov was a brilliant man. When he explains the Laws of Robotics, or when a robotic expert answers questions posed to him, Asimov explains this in a clear and easily understood way. The science fiction elements sound plausible and entirely logical, and Asimov never sounds condescending in his technical explanations. (I admit I have a very soft spot for Asimov, as one of his books helped me grasp concepts of physics that had left me entirely baffled— the end result being my passing the course with a 75. The same methods of those explanations have been carried over into the fictional science in the novel.)
Topping all this are the main characters, Elijah Baley and his robotic partner, R. Daneel Olivaw. Baley is somewhat like the tough, hardboiled private eye, who resents robots in general (for taking jobs away from qualified humans) and equally resents being forced to work with a robot. Olivaw, meanwhile, is the Great Detective embodied— thinking in nothing but pure logic, Olivaw is never surprised, always one step ahead, extremely agile and capable of great physical feats without the slightest sign of effort. In a way, Asimov pits the Great Detective against the hardboiled Lone Wolf, and the experiment is every bit as successful as Rex Stout’s “odd couple” of Nero Wolfe and Archie Goodwin. The characters and their dialogue are marvellous, interesting, and delightful. Conversations range on everything from the nature of Jezebel (the queen from the Bible) to the nature of the Three Laws of Robotics— and all are worth reading.
Despite the easily solved impossible problem, The Caves of Steel is a brilliant novel, without a single dull moment to be found. Its characters are delightful, the descriptions of the futuristic world are intriguing, and it manages to expertly fuse science fiction with the “fair play” detective story. I highly recommend it.