The Skull in the Cider 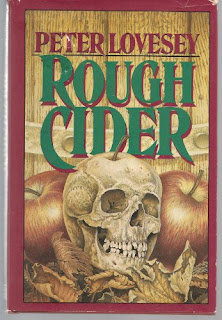 Back when I wrote about Peter Lovesey’s Mad Hatter’s Holiday, I was heavily critical of the book. I found the main character, Albert Moscorp, a very creepy character who single-handedly brought much of the book down. At the same time, I noticed encouraging signs about Lovesey that may turn me into a fan yet, such as an attempt to create a clever plot and that “when Lovesey isn’t preoccupied with developing Moscorp’s character or throwing historical stuff your way, the story is told in a fun style. I suspect Lovesey would work better writing in a modern day setting.”
Well, 1964 is not the most modern date around, but that’s the setting for Lovesey’s Rough Cider. Theo Sinclair, a university lecturer, is approached without warning one day by a beautiful blonde who sits at his table while he’s eating, visits his office, and sits on the hood of his car in the rain for a few hours waiting for him. Theo is rather annoyed at first by her attempts to make his acquaintance. After a not-too-successful date, he gets home to find that she’s broken in and is lying naked in bed, waiting for him. His reaction? Why, he realizes he has nothing to complain about and brings up champagne for two, of course!
Thus begins Rough Cider, a story that reads like Five Little Pigs if it had been written by someone like William DeAndrea. The woman reveals that her name is Alice Ashenfelter, and her father, Duke Donovan, was an American GI hanged for murder in 1945. Theo was just nine years old then— he was an evacuee from London, taken in by local farmers, the Lockwoods. He developed a childish crush on their nineteen-year-old daughter, Barbara. One day, she disappeared and Theo found her in a barn being raped. A few days later, Barbara cut her own throat with her father’s razor.
About a year later, a shocking discovery was made in a barrel of cider coming from the Lockwoods’ farm: a human skull was placed in the cider, which had eaten away all the flesh, leaving nothing but bones and teeth. The forensic team soon enough identified the head as belonging to Barbara’s rapist, and swiftly arrested Duke Donovan, who was reportedly seeing Barbara. Theo’s evidence helped to hang Duke, whom he’d gotten to love.
Alice is not satisfied with the official story, and forces Theo to revisit painful memories. They end up hunting for other players in the tragedy and get different angles of the story. Theo is then forced to look at these past events from a different angle— childhood illusions he’s treasured are shattered, and by the end, a horrifying picture of the truth becomes all too apparent.
This book is fantastic. Like Five Little Pigs, this is about murder in retrospect. The murder took place in 1943, and Peter Lovesey does a fantastic job with the setting. There’s a sense of nostalgia and tragedy—childhood innocence is taken away almost overnight. When Theo arrived at the farm, it could have been the worst time of his life, but people like Barbara Lockwood and Duke Donovan not only made it bearable, they made it enjoyable. Then, Barbara is raped, killing herself presumably out of shame. Duke is arrested, tried and hanged for the murder of her rapist, where Theo’s evidence helps convict him. He feels in a sense responsible, for it was because of him that these two met, and because of that meeting, both met their tragic ends. 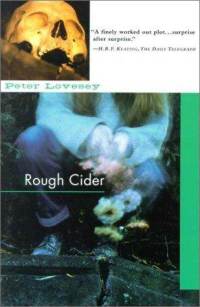 My major point of contention with Mad Hatter’s Holiday was the creepy main character—here, the characters are a triumph. All are stunningly realised, and I found myself practically unable to put the book down. This was not due to puzzle complexity or a plot that twists and turns every five pages. In fact, although the plot is fairly clued and contains a few twists, it doesn’t have a huge level of complexity on the level of, say, The Arabian Nights Murder. No, these were characters you genuinely cared about, and I wanted to see them out of the troubling situations I could see them getting into. None of the characters fall into easily definable roles—one character almost does so, as he seems to be a bullying husband who likes asserting his own power. But as it turns out, he’s no fool and his stance towards his wife, which at first seems hostile, is his way of trying to deal with her alcoholism.
Lovesey’s sense of humour carries into this book as well— for instance, Theo forgets to prepare lectures over the weekend, as he is spending time with Alice visiting old haunts and the like. So, when he gets to class, what does he say?
Adhering to my belief that honest is the best policy, I announced, ‘I’d better confess that I neglected to prepare this lecture. I spent the weekend with a blonde, instead of Bede.’
This was met with disbelieving jeers and a shout that I ought to be ashamed of myself.
‘Indeed I am,’ I told them. ‘And to save my good name and reputation, I’ve brought in my slides of the great cathedrals and abbeys of Europe. Would you turn out the lights, Miss Hooper?’
Call me old-fashioned, but I’m delighted when an author infuses a story with a sense of humour. Lovesey’s is a wry, witty sense of humour which makes the book very enjoyable, despite the dark nature of the material.
Rough Cider is an excellent book, arguably a masterpiece, and I highly recommend it. My streak of excellent reading choices continues!