Killed on the Ice 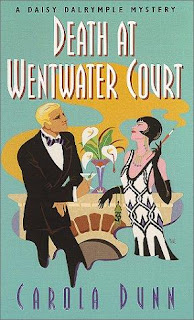 Death at Wentwater Court is the first detective novel in the Daisy Dalrymple series, written by Carola Dunn. For a debut mystery, it’s not bad at all, and I rather liked it. It’s a good, old fashioned fair play detective story, complete with a family get-together over the Christmas holidays at a secluded country house… The inevitable snowstorm that cuts the suspects off from the outside world, however, was delayed due to icy road conditions.
In any case, the book is great fun. The mystery involves the death of the highly unpleasant Lord Stephen Astwick, who managed to get himself invited to Wentwater Court even though nobody really liked him. When a skating party forms one morning to have some fun down at the lake, they receive a shock instead: Lord Stephen has apparently fallen through a patch of thin ice, knocking himself unconscious in the process and drowning to death.
Luckily for everyone (except the murderer), Daisy Dalrymple just happens to be on the scene. In the noblest tradition of Golden Age detectives, she coincidentally is staying at Wentwater Court in order to write an article about it! Just as coincidentally, she’s taking her own pictures of the place, and uses her camera to take photos for the police to make their lives easier. And wouldn’t you know it, the police are so grateful that they treat her as an equal and listen to her suggest why Lord Stephen could only have been murdered.
The plot is decent, but it suffers from weaknesses that many first mystery novels suffer from. Absolutely nothing surprised me about the ending. This has only happened to me a handful of times in my mystery-reading career. I found all the answers to all the questions quite obvious: whodunit, why, when, and how. Usually something leaves me surprised— it could be as small as finding out that Aunt Jane was really the accordionist of the family, or as big as Father Hubert being the crazy axe murderer (and not good ol’ Basil). But I can honestly say that I figured out everything. 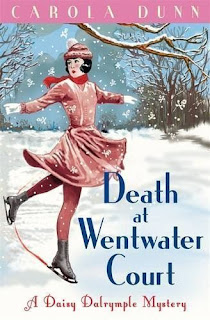 So why bother reading Death at Wentwater Court? Well, I’ll be honest with you: Daisy Dalrymple. What is there to like about her? Better question: what is there not to like about her? She’s charmingly sweet and cunning. She’s intelligent, wants to attain independence, and tries her best to do the right thing. She can admit she’s made a mistake instead of whining about it. Overall, she’s a very nice and lively character, and I wanted to read more about her.
The 1920s setting is nicely done, and so is the definite feel of the Golden Age of Detective Fiction. Everyone reads mystery novels and even Lady Josephine figures out that the inspector suspects foul play. The suspects are questioned one by one and turn just before reaching the door to utter one last dramatic statement. The clues are fairly planted. Overall, it’s plenty of fun—its setting can be very colourful and it tips its hat to the Golden Age quite nicely.
If readers want to get acquainted with Carola Dunn and Daisy Dalrymple, the first in the series is not a bad choice. (The author herself was forced to start there, after all— and I suspect better and “harder” plots come into play later.) Despite its solution’s “guessability”, Death at Wentwater Court is a solid read and I liked it very much. I’m fairly certain I’ll read more of these books in the future.