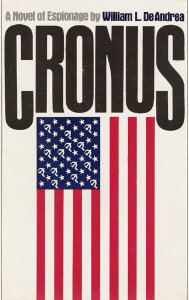 Time has not been kind to William DeAndrea’s novel Cronus, which I would classify more as a thriller than a mystery. As I read it, I was reminded uncannily of the 1984 movie Red Dawn. If you haven’t seen it and you want a good laugh, I’d recommend it. Simply put, it doesn’t age well— it requires the paranoia of the Cold War to make it work. Seen from the viewpoint of someone born in 1993, it just seems incredibly silly. (In Red Dawn, for instance, I always burst out laughing when the main characters pack essential stuff to hide out from the Russians… and they’re sure to take a football, just so they can play a good ol’ American game later in the movie. Hoorah for patriotism!) Not all thrillers from this time are bad—The Hunt for Red October, for instance, has aged quite well. But like I said, the same can’t be said of Cronus.
The main character is nameless. Well, that’s not strictly true: we’re given the name Clifford Driscoll, which everyone takes pains to point out is not Driscoll’s real name. He’s been hiding out from his father, The Congressman, because he doesn’t like all this secret agent work his dad keeps dragging him into. But the Congressman finds him and enlists his aid. A key man in the race for the newest nuclear weapon has a problem—his daughter has been kidnapped. And obviously, the Russians have to be responsible. And so begins a chase.
It’s not awful, but it’s not particularly good. In fact, it’s rather unmemorable. The book is definitely a product of its time— it keeps praising the bravery of the Americans and does nothing but condemn the savage Russians. And savage they are— one of the badduns working for the Russians has an obsession with spilling blood. Killing someone just isn’t fun when there isn’t any blood, and he’s jealous when someone spills more blood than he does, even going so far as stabbing corpses to get more blood flowing. Not only that, once they’ve got their victim kidnapped, rape scene after rape scene occurs, to the point where even the villains had to be tired of doing it.
See, there’s the problem— the villains are not memorable nor are they fun. They’re just savage and psychotic, and that doesn’t make the journey any fun. Why do I love the James Bond novels so much? One of the big reasons is their awesome villains— Auric Goldfinger and his servant Oddjob come to mind. Or how about the cool and cold-blooded Le Chiffre?
There’s no equivalent of that here. It’s just a bunch of savagery which gets almost depressing at times. DeAndrea’s main character, Driscoll, is an interesting character, but he doesn’t do nearly enough to offset the poor villains he’s facing off against.
That being said, the Russians’ plan to take over the States is actually pretty clever. I won’t say much, but it’s what I call really planning ahead. And it’s a lot more imaginative than Elspeth Huxley’s Russians trying to destroy the English economy with Polish pigs in The Merry Hippo. The ending is not particularly surprising, but there are some nice clues buried in here, including one that stares at the reader quite conspicuously if they care to look in the right spot.
Ultimately, this book probably worked better when it was first written. Russia and America are no longer facing off and shouting “You want a piece of me?”, a hockey stick gripped in Russia’s hands and a baseball bat in America’s. It just seems silly and dated. The colourless and brutal villains do nothing to make the story particularly special, despite a fun conspiracy from the Russian side. I don’t particularly recommend this book, but it’s not a total failure either. It’s just painfully average for its time, an unusual thing for William DeAndrea, who usually soared far above the norm.