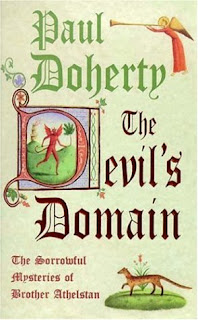 Recently on In Search of the Classic Mystery Novel, one puzzledoctor (aka Steve) has recently been dipping into the work of Paul Doherty. I was intrigued. How could an author of historical mysteries, who apparently kept his eye on the puzzle element as well as the historical, have slipped under the radar for me? I’d certainly never heard of him. But one book review followed another, until I finally went around a few used bookstores and bought three books by Doherty: The Cup of Ghosts, The Season of the Hyaena, and The Devil’s Domain.
I finally decided to read The Devil’s Domain and see just what there is to like about Doherty. The answer: a lot. This was definitely the right book to pick. It a historical mystery with clever clueing and a fast-paced, exciting plot… and also an impossible crime! As an added bonus, it’s an impossible poisoning! For some reason, you don’t see too many of those, probably because it’s kind of hard to come up with a way to make poisoning seem impossible. Still, when it’s done right, it’s a fantastic plot idea! See The Red Widow Murders or The Chinese Gold Murders for good examples.
Anyhow, The Devil’s Domain is part of The Sorrowful Mysteries of Brother Athelstan. The detective is Brother Athelstan, a Dominican friar who is the parish priest at St. Erconwald’s. He is a marvellous character and a well-portrayed religious man: he is kindly, wise, sympathetic, as generous as he can be, and all that makes for a very appealing character. Personally, I’ve never cared for the cliché priest character who is a self-righteous pain in the derrière, eager to condemn everyone who has the smallest belief contradicting his own. Most of the priests I know are very kind, open-hearted, generous men, and I really like seeing those qualities translated to fiction. But I digress.
The setting is England in 1380, and five French sailors have been caught at sea. They are imprisoned in Hawkmere Manor, a rather gloomy place presided over by Sir Walter Limbright, a man who has no love for the French, as they murdered his family and drove his daughter insane. It’s an ideal place for a murder, and that’s precisely what happens when one of the prisoners, Guillaum Serriem, drops dead, poisoned. But how can that be? The prisoners had made a solemn vow that they would never eat anything one of the others hadn’t eaten. There’s no mark on his body to indicate injection, poisoned blades, or the like. In fact, his room was locked from the inside, and access through the window was impossible because of iron bars! About halfway through the book, another of the prisoners dies of exactly the same cause while trying to escape the prison… quite a feat this time, since the prisoners were on their guard after the first murder! This is simply unacceptable on a political scale, and a recent French/English treaty, favourable to the English, may be challenged due to the resulting outrage.
The impossible crime trick is brilliant. Oh, Doherty made a complete fool out of me. He sneakily dangles the method in front of the reader, and the revelation is satisfying. The clue could have been mentioned a little more often to make it stick in the reader’s mind—I had to reread an earlier segment to remind myself of the clue—but it’s a fair game Doherty plays, and I really liked the locked room trick.
But that’s not all. This is a genuine historical mystery. There’s an investigation process, collecting clues and evidence and the like, and finally, the crime is solved. The plot is complex, involving political intrigue and there’s a lot of really fun plot threads, such as the lovesick Sir Maurice Maltravers trying to see his love, who is locked away in a convent. There’s history, assassins, politics, sword fights, betrayals, true love, and an impossible crime. The story, in fact, is littered with corpses— I stopped counting when I reached eleven. There’s not a dull moment to be had.
The historical element is wonderfully handled. Doherty seems to have a genuine love and passion for history, and it really comes alive with a few simple strokes. He establishes the sights, the smells, the sounds, and he manages to sneak in some political commentary by making it an integral part of the plot! This is how a historical mystery should be written!
Of course, the characters are a big part of the novel’s success, and Brother Athelstan is not the only colourful one. His parishioners are a delightful bunch as well, and we are introduced to a new duo: a beggar named Godbless (who starts as a thief and ends as guardian of the cemetery) and a goat named Judas, whom the brother rechristens Thaddeus. The shenanigans that get them involved in the book in the first place are simply delightful.
In fact, there’s nothing not to like about this book. It’s intelligent and plays fair (though the “how” is far more interesting a question than “who”), the impossible crime is a very good one, the historical colour is well-done, the plot is complex and interesting, the characters are delightful… Sure, the main clue could have been a little more prominent, but it doesn’t leave you feeling cheated. Briefly put, it’s a wonderful read and I’ll be sure to read more Paul Doherty in the future. I have three books already and I have a feeling I won’t stop there.
Though, for now, I’ll have to, since I will be flying off to Spain tomorrow. I won’t have Internet access and won’t be taking any mysteries with me. Although, if I just happen to be walking by a bookstore…