In Tribute to A. C. Baantjer 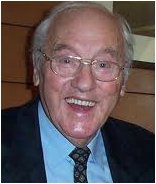 TomCat and John have already posted reviews of books by the late Dutch author A. C. Baantjer, who died a year ago on August 29th, 2010. I’m afraid this review is two days late, but better late than never, right? I cannot soliloquize about how Baantjer influenced me, because I only just finished reading my first (translated) book by Baantjer, DeKok and Murder by Melody. I cannot offer new, in-depth insights into the author’s psyche, the viewpoints expressed in his novels, or the influence on a generation of Dutch authors. I can, however, offer a fair review of a book that not only flew by, but also was highly enjoyable. Isn’t that the best tribute you can ask for as an author, to know your stuff is still being read and enjoyed after you’ve shuffled off this mortal coil?

DeKok and Murder by Melody was 191 pages long, but it felt more like 120. This was a very rapid read. In fact, if not for social obligations yesterday, I’d have had a review up and running then. I’m not quite sure what it was, but Baantjer’s prose slides along very smoothly, rapidly, and seemingly effortlessly. He doesn’t go in for long monologues about what’s wrong with society and all the ways to fix it. He focuses on the story, all while making his main characters, Inspector DeKok and Inspector Vledder, seem very human and realistic. The other characters are also successful, and often, they are not what they seem on the surface.
But to go into more detail would spoil a fine read. Murder by Melody opens with a double murder right off the bat. Bang! Bang! And before page 6 is over, two corpses lie in two different parts of town. Both men, friends who lived in the same boarding house, are ex-heroin addicts. They kicked the habit and one, Jean-Paul Stappert, showed signs of being a musical

prodigy in the making. Until, of course, murder intervened. (For some inexplicable reason, the back of the book goes on to reveal a plot thread that gets introduced with only about 60 pages to go.)
The mystery’s resolution is an oddly mixed bag. There’s a sneaky clue with a double meaning, but the alternative meaning is so obscure and purposely misleading that it left me unsatisfied. The whodunit aspect is likewise uninteresting. On the other hand, the reason for a charade DeKok plays at the end is excellent, and the results from that side of the problem are most satisfying. Overall, although the solution evades DeKok for much of the book, it feels like more of a police procedural than a classic, fair-play detective story.

Baantjer is apparently called the Dutch Conan Doyle, but the comparison puzzles me. On a purely superficial level, both men managed to popularize the detective story, Baantjer doing so in his own language. But whereas Holmes expounds of the different kinds of cigarette ash, DeKok uses sound, tried-and-true police techniques. This case doesn’t hinge on some obscure scientific point or deductions that would only be made by a superhuman intelligence.
Overall, there’s not much more to say about Murder by Melody. Baantjer came up with a good story, told it well, and didn’t side-track from it. The translation from Speck press was fairly decent, and all things considered, I had a blast reading the book.