Night of the Lone Wolf 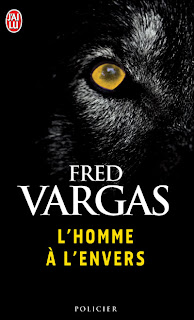 Le mardi, il y eut quatre brebis égorgées à Ventebrune, dans les Alpes. Et le jeudi, neuf à Pierrefort. « Les loups, dit un vieux. Ils descendent sur nous. »
L’autre vida son verre, leva la main. « Un loup, Pierrot, un loup. Une bête comme t’en as jamais vu. Qui descend sur nous. »
***
On Tuesday, four sheep were killed at Ventebrune in the French Apls. On Thursday, nine were lost at Pierrefort. “It’s the wolves,” a local said. “They’re coming down to eat us all up.”
The other man drained his glass, then raised his hand. “A wolf, Pierrot, my lad. It’s a wolf. A beast such as you have never clapped eyes on before. Coming down, as you say, to eat us all up.”
—Opening dialogue of L’homme à l’envers (“Seeking Whom He May Devour”)
When I was returning to Canada from Portugal, we took an Air France flight first to Paris and then to Toronto. At the airport, I found a bookstore/general newsstand and bought five books by French authors. Three of these were by Fred Vargas, a decision prompted by the intriguing summary on the back of L’homme à l’envers (meaning literally “The Inside-Out Man”, though a translation has been published with the inferior title of “Seeking Whom He May Devour”).
Unfortunately, my French edition is another entry in the Hall of Shame I recently started on this blog. This is the worst editing I’ve come across in a long time. On several occasions, the editor completely botched his job. For instance, bits and pieces of other chapters suddenly interrupted the conclusion of the chapter I was reading, making me seriously doubt both my sanity and my ability to understand French. It’s a level of complete, drunken sloppiness that is entirely unacceptable. What on earth happened???  Could my French readers confirm whether this kind of lousy editing is the standard for Éditions J’ai Lu? 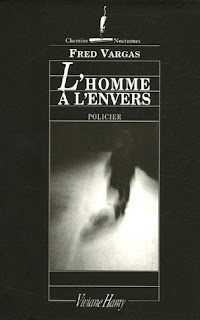 But back to the plot of L’homme à l’envers. The story revolves around Commissaire Adamsberg, who becomes involved in a bizarre and gruesome series of serial killings that have apparently been perpetrated by a werewolf. It started with a series of sheep massacres. Then, a woman named Suzanne accused the village recluse, Massart, of being a werewolf responsible for the attacks. Her accusation is based on Massart’s having no body hair, which keeps in line with an old French superstition that in the daytime, the werewolf turns his skin inside out, leaving the hair on the inside…
Unfortunately for Suzanne, the day after she makes her accusation she is found brutally killed by a wolf. Some people believe that Massart is responsible. He conveniently disappears, and a series of sheep slaughters start up again. These take place along a route Massart had mapped for himself. The police refuse to take the situation seriously. Thus, a group of people decide to take a lorry (driven by the feisty Camille) and go after Massart, following the trail of his massacres. A bit over halfway through the book, people start to die as well, and a puzzle element is thrown into the works: what connection do the victims have to each other? Or were they simply chosen at random?
Vargas’ writing is incredible. While reviewing books here, I’ve gotten quite fond of the work of another French author, Paul Halter, a genius in plotting but whose style is often flawed. Vargas’ style, on the other hand, is incredible. Her writing seems effortless, and she easily conveys an aura of the supernatural. Tension and fear leap off the page, and the book starts with opening dialogue that is simply bone-chilling. (I quoted it and the translation’s version to start the review.) Vargas gets away with social commentary, flashbacks to childhood, and the like, because she never loses sight of her plot. She even introduces a thrilling side-plot with a satisfying conclusion about an assassination attempt on Adamsberg. It is little wonder that Vargas is France’s Queen of Crime, with writing of this calibre.
The characters are excellent: they are well-delineated and the reader gets to know them and care for them. At the same time, pages are not wasted on futile descriptions or character angst. Vargas knows she has a hell of a story to tell and she tells it with great zest. Adamsberg’s detection method is basically sitting and thinking, letting pieces of the puzzle float in and piece themselves together. This seems to me like another nod to great fictional detectives of the past, like Dr. Gideon Fell. 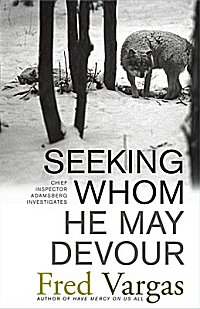 On the flipside, the mystery is not great. I was surprised to see Vargas slipped in a few clues that I missed (clues that reminded me of some classic mysteries), but other clues are entirely withheld and the connection between the victims is pedestrian at best, particularly since the key piece of information has been withheld. It would have been difficult to hide the clue’s implication if it was presented, but the challenge should be embraced. Taking the easy way out is just unsatisfying.
And yet it doesn’t seem to matter much in the end. Vargas’ writing is wonderful and her work will definitely reappear on this blog, even if other editions botch up the editing. As for the English translation of L’homme à l’envers, published as Seeking Whom He May Devour, I slightly dislike the title change. I’ve taken a cursory glance at it, comparing random sections with those of the French version, and overall, it seems well-done. Maps of France and its south-east region are provided to the reader, who is likely unfamiliar with the region. It’s a wise move, although you won’t need the map for fancy trigonometric calculations to figure out the next victim’s location.
Overall, L’homme à l’envers is a top-notch thrill ride, a decent mystery, and plenty of fun. The only downside is my edition’s text, which seems to have been edited by a drunkard. But leaving that aside, I’m glad I read the book.