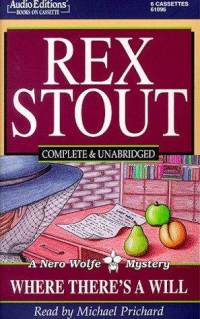 I’ve recently been hired at the university library as a general shelver, and as a result, I now spend 13 hours a week at the library. I haunt the place to death anyhow, but the difference is I now get paid for it. To my delight, I discovered that the job wasn’t particularly formal—more casual—and I learned that if I felt so inclined, I could listen to audiobooks during my shift. I didn’t need to be prompted twice, and as a result, I listened to Rex Stout’s Where There’s a Will, finishing it in practically one day.
Noel Hawthorne was a very, very rich man, and when he died in a hunting accident, his family was consoled in the knowledge that they could comfort themselves with Noel’s money. What a shock, then, when they discover that Noel’s sisters (April, May, and June) get nothing but fruit— a peach, an apple, and a pear! Noel then left his wife a mere half million, and after some other legacies, the rest of the estate, about seven million or so, is left to his mistress, Naomi Karn.
The family is not pleased, although they claim to be more concerned over Noel’s wife than themselves, and they hire Nero Wolfe to persuade Naomi to hand over a large chunk of the estate back to them. Naturally, she is disinclined to acquiesce to their request, and Wolfe, who hates squabbles over the possessions of a dead man, is forced to accept the case in order to replenish his bank account. As a result, he even has to leave his beloved brownstone and suffer through a sub-par lunch! And of course, just to give the poor man a case of indigestion, a shade of murder is introduced into the works…
I had plenty of fun listening to this book—Archie Goodwin is a wonderful character whose narration style makes for very easy listening. The Nero Wolfe tales are like the offspring of a clandestine love affair between the traditional puzzle-plot mystery and the hardboiled genre. Wolfe generally refuses to budge from his chair and does all his thinking in one spot. Archie Goodwin, his confidential assistant, is the man of action who simply has to get up and do something, and finds Wolfe’s tactics maddening.
But he gets Wolfe back right enough with snarky comments that annoy Wolfe just as much. Their banter is always one of the high points of these novels. It took considerable self-control for me not to burst out laughing when Archie goes to the house of a client and has the door opened by a very British butler… and so he announces himself as Lord Goodwin! 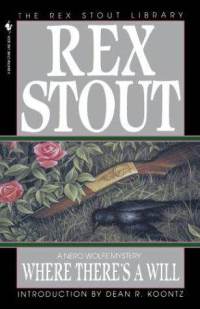 Unfortunately, although Where There’s A Will has a fun opening, something happens in the second act and the book becomes slapdash. Wolfe is forced to leave his brownstone and spend a day at a client’s house, which is where the book seems to lose focus and interest. Perhaps the dawn of World War II (which is mentioned a handful of times) had something to do with this, but the book just decides to stall for time, going nowhere in particular even though there’s only one real ending for it to resort to. Stout tries fooling a reader with a twist in which the culprit would have had to rely on shaky and improbable psychology— then realizing how silly it all is, he decides to go with the obvious and dull ending after all, and the curtain falls.
Plot-wise, Where There’s a Will is the weakest entry in the Nero Wolfe corpus I’ve read to date. The plot loses focus and has a dull, uninspired ending. In short, it falls flat if you look at plot alone. But this is Nero Wolfe, and plot is never the main attraction in these tales. Rather, I love reading these books for the characters, the dialogue, and Nero Wolfe’s brownstone. If you’re new to the series, this is the wrong book to start off with, but it does showcase both Rex Stout’s strengths and his weaknesses as a writer of detective stories.
I have several other audiobooks by other authors, but I suspect Rex Stout would make for the best listening. Michael Prichard, who read this book, makes a wonderful Nero Wolfe, but more importantly, he is excellent as the snarky Archie Goodwin, who is consistently the star of the show… until it’s time to wrap things up, which is Nero’s turn to shine!