Written by Patrick
“When I was a boy, we used to light fires, a circle of bonfires around the village, to ward off the ghosts. Well, the ghosts have come back to Melford to haunt, to seek justice, perhaps even revenge. We not only deal with treasons of the living, Ranulf, but the treason of the ghosts.”
—Sir Hugh Corbett, The Treason of the Ghosts 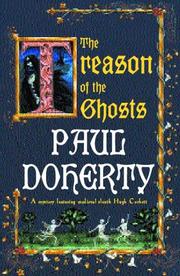 I have shamefully neglected Paul Doherty’s tales starring Sir Hugh Corbett, but recent reviews by The Puzzle Doctor at In Search of the Classic Mystery Novel convinced me to give the stories a shot as soon as I could. But I decided to be a rebel and start with a title that sounded great instead of reading in strict chronological order. The result? I ended up picking up a copy of The Treason of the Ghosts.
It’s a really good title, isn’t it? And it’s adequately explained by Doherty in the quote I chose to open the review with. And the story itself is just as atmospheric as the title. The village of Melford is our backdrop. Five years ago, Sir Roger Chapeley was hung for a series of brutal rapes and murders. Now, however, the killings have started again, and the dead man’s son, Maurice, insists on an investigation. This brings Sir Hugh Corbett down to the village, and like a bloodhound, he begins to sniff around, catching the killer’s scent and relentlessly pursuing it.
At the same time, a second and somewhat related series of murders occur. First, somebody decapitates Molkyn, the miller, and sets his head on a wooden tray, which is found drifting in a millpond. Next, somebody kills Thorkle, a farmer. Both of these were jurymen in Sir Roger’s trial, which seems to be pointing to a killer intent on seeing justice done. But is this killer the same one that has been murdering women? Or is this the work of another assassin?
The mystery Doherty constructs is a fine one, complex and more or less fairly clued. The clueing is unfortunately somewhat weak in a spot or two, but you don’t feel cheated when you’ve turned the final page. Of the two mysteries, the one surrounding the serial killer/rapist is better constructed. The culprit who is killing those who sent Sir Roger to the gallows is somewhat easy to spot due to somewhat blunt clueing. The other killer is better hidden, and the clues pointing to the guilty party are more creative and interesting. (However, don’t take my words as hints to solving the case—there are not necessarily two killers. There might be only one, or maybe all of Bulgaria is implicated.)
There is a sort-of locked room mystery about halfway through the novel, as a man is found inside his locked house with a crossbow bolt in his face. The windows, doors, etc. are undisturbed. Sir Hugh quickly solves this part of the puzzle, however, which is a deliciously simple and effective murder method. It shows some creative ingenuity on par with The Devil’s Domain, the solution to which had me really excited.
Doherty is an expert writer—he effortlessly creates atmosphere and sustains it without a hitch. At the end of the book, he includes a brief author’s note to the effect that his story is based on history— serial killers like the sort described in this book really were around in the 14th century. (However, be advised that this author’s note contains some spoilers, so read the novel first!) The characterization is excellent, and I highly enjoyed Sir Hugh Corbett’s character. He’s a good man trying to do the right thing in this world, and that’s always appealing.
Once again, Paul Doherty manages to turn out an excellent mystery that keeps you compulsively turning the pages to find out what happens next. If you haven’t read one of his novels, I highly recommend them, particularly those of the “Canterbury Tales” series—An Ancient Evil is a new favourite of mine. Sir Hugh Corbett shows plenty of promise as a character in this outing, and hopefully my next is just around the corner!
And if you need any more enticing, check out The Puzzle Doctor’s Paul Doherty bibliography on his blog, which serves as a directory to his Doherty reviews. And for more enticement, take a look at an interesting article Doherty wrote on the appeal of historical mysteries here. When you pick up a book by Paul Doherty, you’re practically guaranteed a delightfully imaginative excursion!