Written by Patrick
“What a piece of work is a man! How noble in reason, how infinite in faculties, in form and moving how express and admirable, in action how like an angel, in apprehension how like a god! The beauty of the world, the paragon of animals! And yet, to me, what is this quintessence of dust? Man delights not me—no, nor woman neither…”
—Hamlet, Act II, scene ii 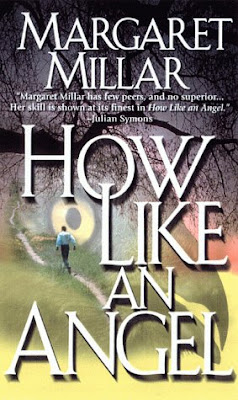 I’m convinced that the mystery community is in a giant conspiracy to get me to start reading the work of Margaret Millar. The trouble started a few months ago, in a discussion with Jeffrey Marks, who asked me whether I’d read any Millar. I replied that I hadn’t, and she wasn’t particularly high on my list of authors to read, although I had been intending to read something by her husband, “Ross Macdonald”.
A few weeks later, I jubilantly held my copy of William L. DeAndrea’s Encyclopedia Mysteriosa, which had been delayed in the mail. Acting on a sudden whim, I flipped to the M section and looked up Margaret Millar, only to read the following: “Unjustly overshadowed by her husband Kenneth Millar, who attained fame as ROSS MACDONALD, Margaret Millar has produced some of the most varied and provocative mysteries in the history of the genre, with endings often unguessable until the last page.” This intrigued me, but I filed it away in the back of my mind.
Next, as I prepared to review Bloody Murder with Sergio of Tipping My Fedora, I shared my progress through the book with members of the Facebook GAD group. I unwittingly started a riot, as members began posting left and right praising Margaret Millar, whom Julian Symons himself praises considerably (and apparently, quite deservedly) in his book.
Afterward, I got to the section on Millar in Bloody Murder, and Symons’ enthusiasm practically leaped off the page, clawing for my throat: “Among the crime writers who have come into prominence since the war she has few peers, and no superior, in the art of bamboozlement. She presents us with a plausible criminal situation, builds it up to a climax of excitement, and then in the last few pages shakes the kaleidoscope and shows us an entirely different pattern from the one we have been so busily interpreting.” As if that wasn’t enough, Sergio went ahead and enticingly reviewed Millar’s The Fiend on his blog!

Clearly the explanation is obvious: the ghost of Harry Stephen Keeler has been at his old tricks, crossing the space-time barrier and getting people in various times and places to collaborate in a crusade to get me to read Millar!!!
My initial impression of Millar was as a “psychological suspense” author I wouldn’t find very interesting. But as time went on, I kept bumping into her name and heard highly favourable comparisons with Ross Macdonald. It was Bloody Murder that finally made my mind up where to start, as Julian Symons analyses her 1962 novel How Like an Angel, which he seems to consider her finest hour.
Well, Symons does make a fair point about one thing: in Golden Age novels, cults were not often taken seriously. The people who joined them were seen as gullible little fools, and the cult’s beliefs were often silly beyond belief (remember Anthony Boucher’s cult in Nine Times Nine?)… at least in the books I’ve read. How Like an Angel takes a very interesting look at a bizarre cult by treating it seriously and with genuine compassion.
It all starts when Joe Quinn, ex-casino cop, loses all his money, his job, and his girlfriend in Reno, and hitches a ride with someone who drops him off in the middle of nowhere. He is directed to the Tower of Heaven, a cult that obediently follows its Master and renounces sinful, earthly pleasures like money, electricity, and fuzzy pink slippers. The people there treat him kindly, and one woman in particular, Sister Blessing, takes a liking to Joe. The cult arranges for him to reach his original destination, and Sister Blessing hires Joe for a job: go to the town of Chicote and find out if a man named Patrick O’Gorman lives there. She warns him not to try contacting O’Gorman, just to find out if he lives there. Joe’s fee is the $120 Sister Blessing has stashed away secretly.
The job seems like a futile one, and Joe is not satisfied to just find out whether O’Gorman lives there. He pays a visit to the household and learns that O’Gorman died five years ago in a horrible accident… unless, of course, he was murdered… But if so, what possible connection could Sister Blessing have with O’Gorman, and why hire Joe? He begins to sniff around in true hardboiled private-eye style… Just listen to this small bit of dialogue Joe Quinn has with Brother Crown of Thorns:
“We got to be saved from ourselves and the devil that’s in us. We all carry a devil around inside us gnawing our innards.”
“So that’s it. I thought my liver was acting up again.” 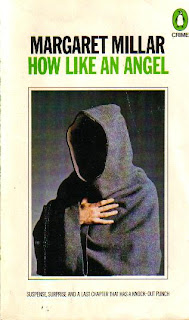 In fact, the style is so hardboiled, that whenever lengthy dialogue finished and the narration returned to the third person, I felt genuinely shocked! The book is a very powerfully written one, but I think Millar really should have written this in the first person. She would’ve lost a small handful of scenes in the process, but much oddness in the text could have been removed this way. She ought to have considered removing a romantic angle that doesn't always work, but I thought it was OK.
That’s really my only complaint. I wasn’t shocked by the ending, as it was a solution I seized on near the start of the novel, but some events convinced me that it couldn’t be right for 150 pages or so. Then, doubt began to settle in and I decided I discarded the theory too hastily. The book is indeed fairly clued… brilliantly so, I’d say. There are several clues buried in the book that you will remember after you’ve finished, saying to yourself “Of course! That’s why Mary turned pale when she heard the news in Chapter 14!!!”
And here is the book’s ultimate triumph: characterization. Everybody is an individual that seems real, and although their cult is somewhat crazy, Millar doesn’t condemn anyone for their beliefs. She manages to paint a highly detailed group of people that you will remember long after you’ve turned the final page: the practical Sister Blessing, Brother Tongue who chooses to stay silent, the self-righteous Brother Crown of Thorns, the cynical man-of-the-world Joe Quinn…
Although I personally guessed the ending of this book, it doesn’t lessen the emotional impact of the final pages. Millar’s achievement here is brilliant, achieving a beautiful balance between expert characterization, a genuinely interesting investigation, and fair-play clueing. It’s definitely a book worth calling a masterpiece, and if Millar’s other books are similar achievements, it seems unfair that so few of her books are currently in print. Such talent deserves so much better…