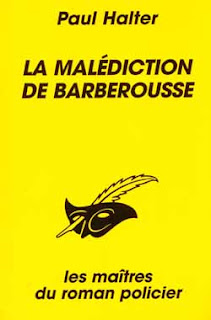 Bien qu’admirateur inconditionnel de Carr et amoureux sans frein de son art de conteur, je me dois de constater qu’aucun de ses ouvrages les plus réussis – je dis bien : aucun ! – ne contient la grandeur tragique des dernières pages de La Malédiction de Barberousse.
As an unconditional admirer of [John Dickson] Carr and unreservedly loving the art of his storytelling, I wish to ascertain that none of his most successful works – I mean it: none! – contain the tragic grandeur of the final pages of La Malédiction de Barberousse.
—Roland Lacourbe, preface to La Malédiction de Barberousse (Barbarossa’s Curse)
(My apologies to Roland Lacourbe if I have butchered his words beyond belief in an attempt to translate them into English.)
The story behind the publication of La Malédiction de Barberousse (Barbarossa’s Curse) is interesting. It was originally self-published by Paul Halter in 1986, and it won the Prix de la Société des écrivains d’Alsace-Lorraine. It introduced Dr. Alan Twist, who would star in the award-winning tour-de-force La Quatrième Porte (The Fourth Door) the following year. It would be published by Le Masque in 1995. It’s even shorter than La Quatrième Porte, and it’s an interesting look at Paul Halter’s imagination. That being said, there are a lot of flaws in this book as well, which seems to be taking a nosedive until it redeems itself with a stunning ending.
The beginning of the book is fabulous, as the French narrator, Étienne Martin, has just received a letter from his brother Jean. Jean tells him about the strange conduct of their father, who was in the shed in the middle of the night and managed to wake Jean up by accident. Jean, careful not to disturb anyone else, goes outside and looks through the window—only to see his father and a young woman who can only be Eva Muller! When his father leaves the shed, Jean goes inside and locks the door to see who has been playing ghost and confront them… but the shed is entirely empty, and nobody could have left without being spotted! Jean asks Étienne to return to France for a few weeks.
Étienne shows this letter to his friend, Steve Morrison, an Englishman who apparently has no trouble understanding French though this is never mentioned. Steve sets up a meeting with famed criminologist Dr. Alan Twist, and Étienne begins to walk home through the fog… which is when he hears footsteps following him! Panicked, he goes to a telephone booth to call for help, when a face and two white hands are pressed against the glass… and they belong to Eva Muller!!! He screams and panics, and when he comes to, he realizes that he is in his own house, being looked after by an attractive nurse, having given the police quite a bit of trouble in the process. 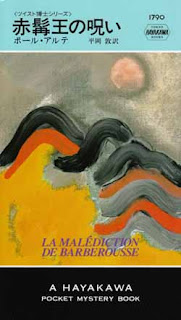 Who is Eva Muller, you may ask? Well, as Étienne explains, in his childhood, Eva Muller was a German girl, a beautiful young woman who knew she was beautiful and took advantage of this, seducing his brother Jean and his friend François. They all took part in a series of games where they mocked the emperor Barberousse (Barbarossa). When their parents hear of this, they plead with their children never to play such games again. To explain, they ask the police commissioner to tell them of the stories he’s unearthed in his research into the city’s history. Apparently, Barbarossa was an emperor who, before he died, cursed anyone who mocked him or his favourite city of Haguenau. Over the years, many cases have been reported where people who attack the city or who mock Barbarossa are murdered in impossible circumstances, including an entire group of soldiers massacred and a man who is stabbed when the city is burning, while he was surrounded with a wall of fire! The commissioner then tells of a story in which he took an active role, when a German man who mocked Barbarossa fled to the top of a tower. A fog settled in, and when it lifted, the German had been killed with a sword, despite two groups of witnesses standing watch, ready to teach the German a lesson as soon as he came down! (The tower murder has been compared to the tower murder of He Who Whispers, but Carr’s version of the murder is infinitely more clever.)
The children are genuinely frightened by these tales, but Eva Muller seems amused, and promises to reveal to everyone just how Barbarossa’s ghost keeps murdering those who mock him. She isolates herself in an abandoned shack, outside which an artist and his model are busily at work. A few hours later, the kids return to find her dead, stabbed with a sword and with her eyes gouged out!!! However, the nearby witnesses swear nobody approached the shack...
Back in the present, Étienne makes a better acquaintance of Frances, the nurse who helped him, and then he goes to France. But right when he returns, evil strikes: his father is found in the locked shed, stabbed to death! With all these impossibilities, you’d think Halter would have a hard time explaining them all away, right?
Well, he doesn’t… the problem is, the explanations for so many of these are underwhelming. Dr. Twist arrives in France, because he promised Étienne he’d come to help out, and he immediately solves the murder of Étienne’s father, in a scene that basically goes something like this:

As one impossibility after another is explained away, my enthusiasm for the book waned more and more. So many of these impossible crimes have such uninteresting explanations— I particularly disliked the explanation for the locked-shed murder. Soon enough, only one crime remained: Eva Muller’s death. I braced myself for a dull, uninteresting conclusion, and it seemed like that was what you got. 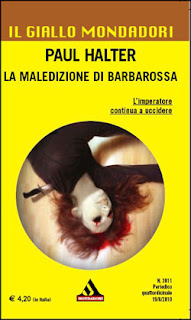 But I was wrong! After the “dull” conclusion, Halter follows with a marvellous scene! Étienne, on the eve of his departure back to England, is alone in the house when he hears a voice laughing and knocks on the door… but when he goes to open the door, nobody is there and there are no footprints in the snow outside! Suddenly, the atmosphere becomes tense, with a creeping shadow of evil closing in as Étienne has a final confrontation with the murderer, in an emotionally charged scene that absolutely saves the book. Suddenly, the locked-shed murder, uninteresting as the explanation may be, makes sense. As pedestrian as the other explanations are, they make sense. Eva Muller’s death has a somewhat far-fetched secret behind it, but it’s the most interesting one in the book, and I for one was willing to swallow it this time. The finale truly is excellent, as Roland Lacourbe points out, though somewhat melodramatic at the same time… However, I think I’ll have to disagree with him and say that Carr did surpass it a few times in his own books, most notably perhaps in He Who Whispers.
Overall, La Malédiction de Barberousse (Barbarossa’s Curse) is an interesting book, but a highly flawed one. The legend of Barbarossa’s curse is a fascinating one, but the explanations for practically all the impossibilities are rather uninteresting. Despite all this and the somewhat melodramatic finale, it is the ending that saves this book. Finally, explanations get interesting, and the final note was a particularly poignant one. As a first novel, it has plenty of flaws, and the descriptions of Halter’s native land have a quality of a romanticized fairy tale. But the ending was a very interesting one, though Halter has managed something similar in another book with far more success overall.
You could do worse than this book, but you could also do far better. And Halter has done that in his other books. This is my least favourite thus far.