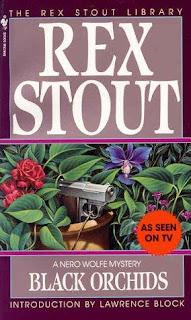 I’ve been on a mission to read the Nero Wolfe books in as chronological an order as I can manage. The previous entry, Where There's a Will, was something of a disappointment: it wasn’t just flimsily plotted, but it seemed to lose interest in itself about halfway through. So when you compare it with the next book in the series, Black Orchids, the achievements of the latter seem even more impressive.
The structure of Black Orchids is completely different from any Nero Wolfe book that preceded it. It is not a novel but two novellas stuck together with only a tangential relationship between the two stories. The cast of characters is entirely different, and in fact, only the mention of black orchids gives the stories some common ground. Archie Goodwin himself must intervene and explain to the reader what he is trying to do. These stories are too long to be considered short stories, but they’re also far too short to be novels.
And to be honest, this has been one of the high points of the series thus far. It doesn’t contain the brilliance of Too Many Cooks, but the plotting of these stories is tighter and more fast-paced. Stout retains his razor-sharp skills in dialogue and characterization, so the reader misses out on nothing in terms of character interactions, particularly those between Nero Wolfe and Archie Goodwin (who narrates these tales). In fact, Stout seems to thrive in this form of storytelling: the sharper plotting invests our interest in the characters even more, and as a result, Black Orchids is a triumph. 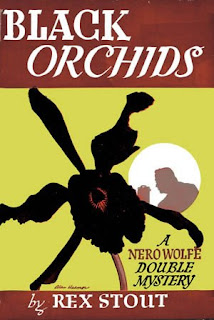 Black Orchids
Lewis Hewitt proudly displays a revolutionary new orchid he’s developed at the local flower show: black orchids. Nero Wolfe, amateur orchid grower, is furiously jealous, and sends Archie to the show for several days to take a look at the flowers, before deciding to brave the outside world and take a look at the orchids for himself.
The real show, though, is at the Rucker and Dill exhibit, an idyllic scene where two people sit all day and act out a silly pantomime, involving a picnic, games, and a fake nap which is followed by a rude awakening with water from the artificial pond. Only once Wolfe comes to the flower show, Harry Gould fails to wake up—he’s been murdered in front of all those people with a gunshot.
While this seems like it might be an impossible crime, Stout quickly explains this angle away, which is a shame, because this could’ve made a genuinely excellent impossible crime story. Archie does Wolfe’s legwork and threatens marriage, Wolfe solves the crime, and manages to worm out the black orchids from Hewitt as his reward. Overall, the story is excellent, but the female characters in this novella are actually rather weak. Stout was good at writing strong, independent women characters, but you won’t find any here. Still, this is merely a minor quibble in comparison with the excellence of everything else. 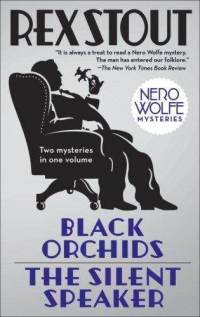 Cordially Invited to Meet Death
Bess Huddleston plans parties, and she’s good at her job. However, an anonymous letter writer seems hell-bent on ruining her, sending nasty letters to prominent clients that basically tell them that Bess blabs people’s guilty secrets. This naturally isn’t good for business, and Bess hires Nero Wolfe to find out who is behind these letters. She thinks she knows already, but Wolfe prefers to wait for another letter to get a more definite lead.
Unfortunately, while waiting, Bess Huddleston dies, apparently as the result of a tetanus infection that she caught in the presence of Archie Goodwin. Bess’ brother Daniel, a research chemist, insists it was murder, but Wolfe supposedly washes his hands of the affair… until Inspector Cramer makes a serious strategic blunder, and Wolfe sets out to completely humiliate his rival.
This is a decently plotted story, but the solution is frankly somewhat silly, with a very debatable gambit from the killer to divert suspicion away from himself. (As always, don’t take that as a hint to the killer’s gender: it could very well be a “she”, “they”, or even an “it”— there’s a monkey involved in the proceedings, as well as an alligator and two bears!) It’s a complete blunder from the killer’s part that sucks out any potential surprise.
However, Archie is in top form, being forced to play tag with a monkey, tripping over an alligator, and providing some excellent clues unbeknownst to himself. Wolfe solves the case in style and does manage to make a complete ass out of Cramer, who will definitely think twice before trying a similar battle plan in the future. The female characters in this story are far more interesting than in the titular Black Orchids, and one even manages to worm her way into Wolfe’s kitchen and solve one of his culinary dilemmas!
***
And that’s Black Orchids. The two-novellas-in-one-book format really does wonders for Stout. The plot doesn’t drag uselessly on as it does in, say, Fer-de-Lance, and you don’t lose any of those precious Nero-Archie moments that fans of this series often delight in. It seems to bring out some of Stout’s most creative plotting to date, while the dialogue remains at the unusually high Stoutian standard. It’s a win-win situation: the reader (at least, this one) is more invested in these tales than in the last novel to appear, and you still get plenty of Wolfe-Archie banter. It’s one of my favourite entries in the series thus far.