He's been mostly dead all day... 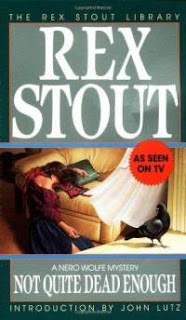 Following Black Orchids, Not Quite Dead Enough is the second of the Nero Wolfe books that is not a novel. Again, Rex Stout gathers two almost entirely unrelated novellas and sticks them into one book; but this time, he feels comfortable enough with the form. In Black Orchids, Archie Goodwin writes brief prefaces to the stories and an afterword, which seem like an apologetic note trying to explain to readers what he is trying to do. There is no such thing going on in Not Quite Dead Enough.
The novella form seems to have brought out the best of Rex Stout. The plotting is tighter and more fast-paced, and the stories themselves are far more interesting. Some Wolfe novels would have worked so much better in this form, particularly (of those I’ve read) Fer-de-Lance, Too Many Clients, and Where There’s a Will. Each of these books is fun to read, but I’ll be darned if I remember much about the plots of those I haven’t read recently.
Which brings us to the stories in Not Quite Dead Enough. There isn’t much of a connection here, except for the fact that they are linked to WWII. Nero Wolfe is determined to help the war effort and kill some Germans, and Inspector Cramer’s son has donned a uniform. Archie Goodwin is now Major Goodwin. However, that doesn’t affect his narration style any, and Wolfe treats the military authorities, especially when they show incompetence, in the same way he treats Inspector Cramer & Co. 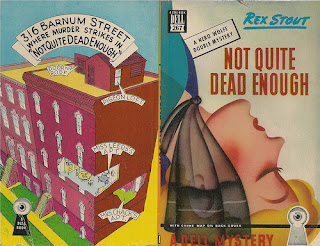 Not Quite Dead Enough
This is a strongly-plotted story that moves along at an unexpectedly quick rate. Archie Goodwin has been given a mission to get Nero Wolfe to work for the Army. He arrives at the brownstone, but horror of all horrors—the office is dusty, there’s no food in the kitchen, and although it’s time for Wolfe to be with his orchids, he’s nowhere to be found!
It turns out that Wolfe has decided to get fit again and enlist in the Army to kill some Germans (because he apparently didn’t kill enough in 1918, as he says). To do this, he has enlisted the aid of Fritz Brenner, who is helping him to exercise.
Archie is horrified, and is convinced that Wolfe has simply shut off his brain. The only cure for his condition, he decides, is to find a mystery that Wolfe couldn’t resist solving. So Archie sets off to find one, acting on a hunch after hearing a tip from his love interest Lily Rowan. Unfortunately, he gets more than he bargained for when, the next day, Lily comes to the brownstone, having discovered the murdered corpse of a friend. 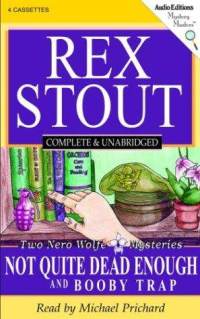 Archie then goes about a plan of his, the purpose of which at first entirely baffled me. He seems to be doing absolutely nothing but dig himself into deeper trouble on purpose, but his plan is in reality quite ingenious. Nero Wolfe is forced to spring into action and discovers the killer. It manages to be a solid ending to a solid story, and it’s an interesting introduction to Wolfe’s operations during wartime (which really get moving in the next story).
Booby Trap
The back of my book seems desperate to pass this story off as something it isn’t: “Plus, a second Nero Wolfe brainbender, Booby Trap, where Wolfe throws a blast for a mad bomber!” The reality is quite different— the story does involve a death via explosion, but there’s no “mad bomber”. In fact, the death seems quite accidental, but Nero Wolfe proves it was murder. He then has to set a trap for the killer.
This trap is the best part of the story—it has a deceptively simple appearance, and it seems like a ridiculous test that the killer would be stupid to fail. Wolfe turns the tables neatly on the reader and Archie, though, when the real trap is revealed, and although the killer is arbitrary, the neat trick played just a page before justifies this small weakness in plot. The finale is a really powerful one—there’s no audience, like in The Red Box: it’s just Wolfe, Archie, and the killer in a car in Van Cortland Park.
*** 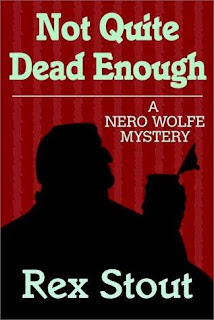 The most interesting thing about these stories is the historical context in them—while unmistakably Nero Wolfe adventures, they are also wartime tales. Their purpose is clear: promote the war effort. The Nazis need to be destroyed, and the men and women like Inspector Cramer’s son who have donned a uniform to accomplish this goal are portrayed as heroes. Others who take advantage of this for their own profit are shown as despicable creatures—one of the plot strands chasing each other through Booby Trap involves corporate espionage and wartime profiteering that is effectively sabotaging the war effort.
Throughout all this, Wolfe remains Wolfe and Archie remains Archie—this is not propaganda disguised as fiction. Both these tales are excellent and extremely engaging, with excellent dialogue and sharp characterization that’s guaranteed to grab your attention. Like in Black Orchids, Rex Stout seems to enjoy the multiple-novella format a lot more than he did in the novel that came before them. The only difference is that these tales are more mature, and Stout seems more comfortable with this form now. It’s not to be missed by fans of Nero Wolfe, and it holds up remarkably well. I encourage readers to step into the brownstone for a spell and watch the sacrifices Wolfe makes for the war effort: Not Quite Dead Enough is an excellent book that I enjoyed very much.