Written by Patrick
Most men, they'll tell you a story straight through. It won't be complicated, but it won't be interesting either.
—Ed Bloom, Big Fish (2003) 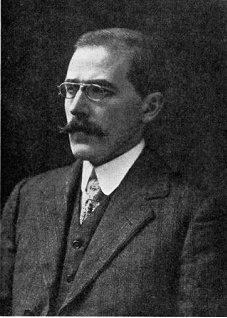 Alfred Walter Stewart had a long career as a professor in chemistry and a university lecturer in Glasgow and Belfast, but more importantly for the purpose of this review, he also wrote detective novels under the name “J. J. Connington”. He was a well-regarded figure in his day, and John Dickson Carr gave him some praise in his famous essay The Grandest Game in the World. One of Dorothy L. Sayers’ better novels, The Five Red Herrings, is an homage to his book The Two Ticket Puzzle.
Unfortunately, academic disinterest and snobbery levelled against the Golden Age of Detective Fiction have seriously harmed Connington’s reputation. If you hear about him at all nowadays, it will be classed alongside the similarly-maligned John Rhode, Freeman Wills Crofts, Henry Wade, or R. Austin Freeman. (None of these writers were mentioned even in passing by P. D. James in Talking About Detective Fiction, and Julian Symons mentions some of these authors only in passing.) He will be called an ingenious technical writer but someone who couldn’t entertain a drunken fish— a Humdrum, in fact. After reading his book The Case With Nine Solutions, two explanations propose themselves to explain this discrepancy: either Connington and the Humdrums have been unfairly attacked, or the academic worth of drunken fish has been sorely underestimated.
The first case seems the most probable solution, because unlike, say, Freeman Wills Crofts, Connington succeeds admirably in bringing his characters to life and making them seem like real people with real emotions. Not only that, he manages to throw in social commentary that would confound anti-Golden Age snobs if they bothered to read his books, and he combines it with a brilliantly-clued puzzle and some small asides about chemistry that make me wish he was my lecturer in university. (As much as I love chemistry, which is another point in Connington’s favour, my current professor can’t explain concepts very well at all.)
But I’m really getting ahead of myself here. Let’s tackle the plot first and foremost. Dr. Ringwood is sitting comfortably at home when a colleague, Dr. Trevor Markfield, drops in to visit. The social call is short-lived, however, as the maid of the SIlverdales telephones: a fellow maid is seriously ill and she requires Dr. Ringwood’s help. The fog outside is intense, so Dr. Markfield kindly offers to pilot Ringwood to the correct street, but Ringwood manages to get muddled up and drives up to the wrong house. He enters, suspecting something is amiss, and inside, he finds a young man who has been shot twice in the lung. He spurts out a mysterious cryptic dying message and expires. 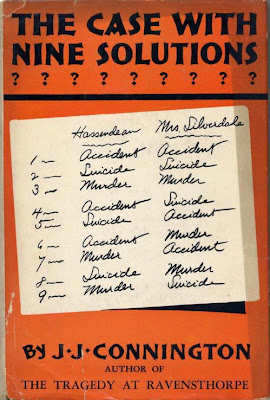 There’s no phone in the house, so Dr. Ringwood goes next door, to the correct house this time, and diagnoses a case of scarletina before calling up Sir Clinton Driffield to ask for help. He decides to wait at the house, since he can do nothing for the ill maid, and when the police arrives, Sir Clinton makes some excellent deductions to prove that the murder took place elsewhere. They then head to the Silverdale residence, but nobody answers the doorbell. This is because the maid has been strangled in the interim, and the other girl has only escaped with her life due to her illness…
Thus begins a hunt for a particularly unlikeable killer, who seems to have murdered three people when the corpse of Mrs. Silverdale is discovered. The dead man next door turns out to be her potential lover, Hassendean, and he seems to have been universally disliked: a nasty bit of goods whose only advantage in life was his connections. But is this a case of double murder? An accident? A suicide pact gone wrong? What are the titular nine solutions?
Well, The Case With Nine Solutions is an impressive title, but a more appropriate one might be The Case With Nine Possibilities. This is because the book focuses on the deaths of Mrs. Silverdale and Hassendean, and the nine solutions are the nine possible combinations when you consider that every unnatural death must be the result of accident, suicide, or murder. However, this is the only disappointment in the entire book— everything else consists of a complex web of cryptograms, anonymous messages, footprints in the soil, alibis, deceptions, love affairs, and disguises. The solution turns out to be a simple one, and the final chapter consists of entries in Sir Clinton’s notebook, with some clues so ingenious I never spotted them, and my jaw dropped in surprise and admiration when I read the clue that was the key to Mrs. Silverdale’s death. The solution is not mind-blowing, but it’s solid and the clues pass under your nose, although you can probably just guess the killer’s identity.
Sir Clinton’s deductions are truly admirable— take note in particular of his opening scene, where he deduces just why Hassendean was murdered elsewhere, and the reconstruction of the maid’s murder in Chapter 4 is a particularly impressive passage. (It’s little wonder Carr thought highly of Connington’s work— you can see some influence on Carr’s own work, particularly the impressive reconstructions of Dr. Gideon Fell.)
So the plot is a triumph, and that makes the engaging characters and social commentary interesting extras to an already superb book. Golden Age authors are much maligned for not striving towards literary ends, but Connington seems to comment on this indirectly in this early passage of the book:
All three of them were experts in death, and among them there was no need to waste time in polite lamentations. None of them had ever set eyes on the victim before that night, and there was no object in becoming sentimental over him. 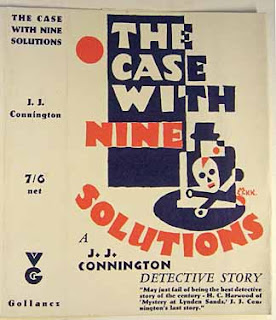 Critics like P. D. James love taking authors to task for their supposed upper-class worship— you’d get the idea that every amateur detective was a Philo Vance or Lord Peter Wimsey clone! But this is an outrageous piece of fabrication intended solely to discredit GAD authors—take a look at this unflattering portrait of an upper class character, a relative of the dead man and the connection that made others tolerate him despite their dislike:
Dr. Ringwood, watching the change in the situation, reflected sardonically to himself that a title had its uses when one came to deal with a snob.
“That old bounder was rude to the Inspector on principle; but when Sir Clinton Driffield asks precisely the same question, he’s quite amenable,” he thought to himself. “What a type!”
Oh, I can just feel the upper class worship in that passage… If that wasn’t enough, you get some social commentary in the opening pages, after Dr. Ringwood complains at length about the difficult life of a medical practitioner:
“Still got the notion that human life’s valuable? The war knocked that on the head,” Markfield commented, rubbing his hands together to warm them. “Human life’s the cheapest thing there is. It’s a blessing I went over to the scientific side, instead of going in for physicking. I’d never have acquired a good sympathetic bedside manner.”
And then there are some great side-lectures on chemistry, which are interesting, clearly explained, and not too long. In Chapter 8, for instance, Sir Clinton lectures about the purpose of taking a mixed-melting point. It is an informative and clearly-worded passage, and I just love asides like this from people who knew what they were talking about. Connington wasn’t some fellow who pulled the first complex-sounding term out of a chemistry textbook to make him sound smart—he was a lecturer in the subject and knew what he was talking about. When these explanations are given, they sound like a professor is having a one-on-one with a student who’s having trouble understanding the course material.
Overall, The Case With Nine Solutions is a triumph, and I’d argue a masterpiece in the genre. Connington keeps a firm grasp on all his plot threads and the resolution is most satisfactory. It’s a must-read for fans of the Golden Age of Detective Fiction, and it’s a good book from an unfairly maligned author. It shows creativity in its set-up and pure ingenuity with its clues, and that’s a quality that can’t be scientifically quantified. An author either has that magic or hasn’t got it— and Connington puts on a grand performance that proves he’s definitely got it. It’s combined with skilful writing that makes this an unadulterated pleasure to read. I highly recommend it.
As a final note, mystery scholar extraordinaire Curt Evans has announced that his book about the “Humdrums” now officially has a title: Masters of the Humdrum Mystery: Cecil John Charles Street, Freeman Wills Crofts, Alfred Walter Stewart and the British Detective Novel, 1920 to 1961. Look for it to become available sometime next year; Connington is one of the authors discussed therein. The section on Henry Wade had to be cut out for reasons of space, but hopefully it will find its way into print sooner or later.
Note: A character in this book is named Mrs. Marple. It seems incredible that such a name would be given to a maid character, but The Murder at the Vicarage wouldn't appear until 1930, and this book was published in 1928. I'm not sure if some Miss Marple short stories had already been published or not, but it's an interestingly funny moment, because Mrs. Marple turns out to be a very poor witness indeed, quite unlike Miss Marple. So give ITV some credit-- they were right when they gave a young Miss Marple a love affair! They just omitted the wedding scene...