The Care Bears Solve a Murder 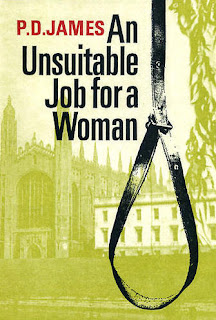 I really don’t think I can be very fair to today’s book, An Unsuitable Job for a Woman by P. D. James. I’ve taken James to task on this blog before for spreading the wrong ideas about the Golden Age of Detective Fiction, but I approached her book with an open mind and with eager anticipation, since I’d read many positive comments about it. One of the things I love about my job is that I get plenty of time to listen to audiobooks, and I’d managed to find an audiobook version read by one Davina Porter.
An Unsuitable Job for a Woman has got a marvellous title and an excellent idea for a plot. Bernie Pryde, from Pryde’s Detective Agency, commits suicide, and leaves the business to his partner, the young Cordelia Gray. Soon afterwards, Cordelia gets her first case, when she is hired by Sir Ronald Callender. His son Mark had recently left college and gone to work as a gardener, and was found hung, an apparent suicide. There seems to be no doubt about the verdict, but Sir Ronald is not happy. He wants to know why Mark killed himself and whether he was responsible for it or not.
The plot shows genuine promise, but I did not enjoy reading the book. However, a large portion of the blame has to go to the audiobook reader, Davina Porter. She completely misinterprets the character of Cordelia Gray; she turns Cordelia into a Care Bear, with a syrupy-sweet voice, dripping with childlike wonder, awe, and innocence. It is simply the wrong voice for Cordelia— the anti-voice, if you will. (Try imagining a Care Bear reading Edgar Allan Poe’s The Raven. All the poem’s tragic beauty would be sucked out.) When someone remarks that Cordelia’s tough, I could barely restrain a guffaw. Meanwhile, the reader’s voice became intolerably annoying; apart from Cordelia, who was irritating, every other character seemed bland and colourless and desperately trying to preserve that perfect balance of blandness. Furthermore, the reader did her best to suck the fun and excitement out of every possible scene—near the end, Cordelia has an “adventure” involving a well, and it was an extremely boring and annoying sequence as read by the reader, although it should have been tense and exciting. The reader basically makes this book as thrilling as a static apnea competition. 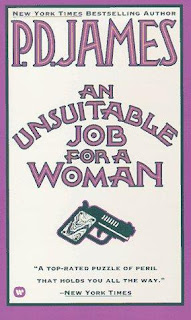 This dreadful kind of reading did not do justice to James’ writing, which is flawed; for instance, at times it is overly verbose. She uses paragraphs where a few sentences would suffice to describe something absolutely irrelevant to the story, and as a result, I tended to drown in the descriptions, struggling to remember just who or what was being described. Another bad habit James has is psychoanalyzing every single thing, to the point where the characters start psychoanalyzing themselves! Coupled with an extremely annoying voice, I came to the conclusion that this was a mediocre book at best being given a simply awful reading.
The audiobook situation got absolutely intolerable, and so I finally turned it off when the reader was enacting a climactic scene, as Cordelia gets into a showdown with the killer and they get into a philosophical argument. (The reader got so emotional, it actually sounded like two automatons debating on the nature of gravity.) However, when I later opened the book and started physically reading from the start of the scene. I noticed a major change in my attitude towards the book— suddenly, I was genuinely enjoying myself! Sometimes, the philosophizing got excessive, but I was genuinely fascinated with the finale, as you find out just what has been going on and why— and James asks her readers whether it was worth it. It’s a very powerful sequence, with one emotionally charged scene followed by another. The final pages are absolutely brilliant, as James’ regular series detective, Adam Dalgliesh, briefly intervenes, for a powerful and gripping ending.
In fact, it comes very close to brilliance, but two small sentences form a small shadow for me that I take somewhat personally. I take major objection to the following statement, which appears in the finale. The logic behind this is absolutely awful and I practically take personal offense to it.

"[So-and-so] was religious. [She/he] was, therefore, practised in self-deception." 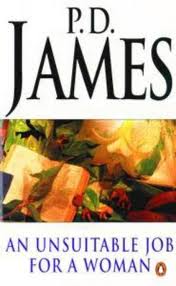 If these two sentences were struck out, you would have lost nothing— this bit adds nothing to character or plot development and instead got me riled up for no reason at all. Without them, the finale would have been practically perfect. I thought it was excellent, but seriously, was this really necessary?
What about the mystery? Frankly, it’s not too good, and a large part of it relies on out-dated science. The twist is obvious and has been carried out time and time again, often with more surprise to the revelation. However, the interest in this book, for me at least, is not so much in whodunnit as in whydunnit. It’s a dreadful cliché, I know, but in this case it’s true: I was bored to death until I picked the book up myself and read the finale.
However, I’m not too sure how much of my issues with this book should be blamed on the horrible reader, who sucked out anything remotely interesting and replaced it with blandness. I didn’t realize how powerful the confrontation scene was until I read it physically for myself— however, I didn’t have the time or the willpower to go back and read everything for myself. Ultimately, I’m really not sure how I feel about this book and James’ writing; I feel I made a major mistake listening to the audiobook, which is undoubtedly the dullest I’ve heard this year. I did not enjoy much of the book, but I am absolutely fascinated by the ending. However, P. D. James has a lot of flaws in her writing, among which are annoying habits of psychoanalysis and unnecessary verbosity. I can’t really give a fair assessment to An Unsuitable Job for a Woman, but I can assure you that I won’t be singing Hosannahs to P. D. James as almost every professional critic is doing now that she’s released a new book.