Case Without an Amateur 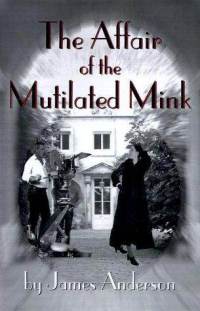 The last book I read, The Act of Roger Murgatroyd, was a dismal affair. It markets itself as a parody of Agatha Christie and her contemporaries, but it is remarkably mean-spirited, with senseless plotting, insipid characters, and a writing style composed almost entirely of clichés. To top it all off, Gilbert Adair even talks about G. K. Chesterton just so he can throw in the line “Gilbert is a genius.” Someone truly is a bit too fond of himself…

But I digress. The essence of it is that The Act of Roger Murgatroyd is possibly one of the worst mystery novels ever written, but more importantly, it is written with total disdain for the genre and Agatha Christie herself. This is why James Anderson’s The Affair of the Mutilated Mink was such a tremendous breath of fresh air for me; here, at last, is a tribute to Agatha Christie done right!
“Tribute” describes the book far better than “parody” or “satire”. While the book does poke fun at itself once in a while, it takes itself more or less seriously, consciously making its setting not the 1930s, but the universe of 1930s mysteries. Anderson uses truly delightful touches to bring this effect to life—he makes references to Michael Innes’ John Appleby or Ngaio Marsh’s Roderick Alleyn as though they were real people. When he talks about mystery writers, he doesn’t mention Agatha Christie but Ariadne Oliver. And finally, Chief Inspector Wilkins delivers this marvellous speech about the tough life of a policeman in recent years:

'When I joined the force, I never saw myself out of the uniformed branch - perhaps a sergeant, at best. And in a peaceful place like Westshire, thought that poachers and the odd petty thief would be the extent of my contact with criminal types. But who could have anticipated the crime wave that's broken out among the English upper classes in recent years?'
'Crime wave? Put it as bad as that, do you?'
'Oh, my goodness, your lordship, yes. Never a week goes by without a nobleman being murdered in his library - oh, beg pardon, didn't mean to alarm you - or a don in his study, or an heiress in her bath.'

All this is done not with Adair’s disdain but with a genuine love and respect for the genre. Anderson is certainly inspired by Agatha Christie and he doesn’t disguise the fact; nor is he embarrassed by it. He proudly waves the banner of classic mystery fiction, and the result is an absolutely delightful read that does an excellent job paying tribute to Agatha Christie. 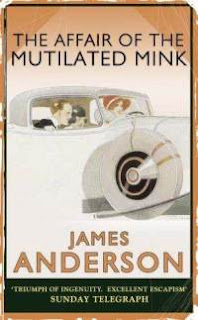 The setting is Alderly, the country house of Lord and Lady Burford. Lord Burford has recently become an enthusiastic film fan, and so when the opportunity arises to invite his favourite film star, Rex Ransom, to the home, he is pleased as punch. Rex is due to star in an upcoming movie called The King’s Man, set during the English Civil War. The original script was for a silent movie, but it will be adapted into a “talkie”, and the film crew are thinking of shooting at Alderly. However, the shadow of a previous murder at Alderly still hangs over the family, so they insist that this will be a very small get-together: only three or four guests at most.
Well, you know that saying about best-laid plans and all that. Despite the Burfords’ best efforts, guests keep finding their way to the house. First, the movie’s screenwriter turns up with a copyright, demanding to go along—and of course, he brings his secretary. Next, a long-lost cousin turns up right on cue from Australia with a husband in tow. Because nobody knows what the husband is like, the Burfords’ daughter, Lady Geraldine (‘Gerry’), decides to invite two prospective fiancés to the house and hope one of them will be able to entertain him. Next, an Italian film star arrives to the house uninvited… and before long, someone is prematurely sent off to meet their maker, with the rest of the party being very convenient suspects.
The Agatha Christie influence is clear. Anderson does this very well: we see the Bright Young Things Christie liked to write about again and again. We see the complex love triangle with no easy way out. There are multiple solutions, and while the twist is not revolutionary to someone familiar with Christie’s work, it’s very well explained and clued. In fact, that’s possibly the most pleasant thing about this book—the clueing is scrupulously fair.
The entire mystery falls into the hands of Chief Inspector Wilkins, but the Chief Constable thinks the mystery is too much for the poor chap, and so they send for one of Scotland Yard’s top men—Inspector Allgood. The fellow seems to be a parody of figures like John Appleby or Roderick Alleyn, and of course, he has a reputation to protect as a detective. He manages to make some astoundingly brilliant deductions… but unfortunately, they’re all wrong. It’s plodding Chief Inspector Wilkins who gets to the bottom of the case first. (In this way, the book somewhat resembles Leo Bruce’s excellent Case for Three Detectives, where parodies of Hercule Poirot, Lord Peter Wimsey, and Father Brown all came up with brilliant solutions for a locked-room mystery, but they were all wrong— the case is actually solved by the local policeman Sergeant Beef.) 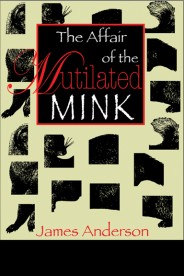 James Anderson seems to really love this sort of mystery, and it comes across in the book. Like I said, the book isn’t a historically accurate representation of the 1930s, but curiously set inside the fictional universe of 1930s mysteries. This can be seen in small touches everywhere, but one of my favourites is after the case is solved and Wiklins is called away for another promising murder case:

It was Sergeant Leather. He came across the room. 'Excuse me, my lord.' He turned to Wilkins. 'Sorry to interrupt, sir, but you're wanted immediately.'
'What is it?'
'Murder, sir. At Meadowfield School.'
'Good gad,' Lord Burford exclaimed. 'I'm on the Board of Governors. Who's been murdered?'
'The matron, my lord. Found hanging in the gym, her hands tied behind her back.' He looked back at Wilkins. 'The odd thing is, sir, she was wearing a Red Indian headdress.'
Wilkins gave a groan and got to his feet. 'Oh dear, here we go again. I don't like school murders. So many people about, and all the teachers hate each other and lie like troopers all the time.’

Finally, Anderson’s comic touches really work splendidly, and his characters are such a delightful bunch that the book simply flies by. Consider this small exchange from the book’s beginning:

Gerry said, 'I honestly think the talkies have taken the place of guns in your affection.'
'Oh, no. Basically my collection'll always come first. I admit my enthusiasm was dampened a bit after one of 'em was used to commit a murder. But it'll come back. In the meantime I'm very much enjoyin' having something else to do. And I must say, they're remarkably hospitable in these places. Manager meets you in the foyer, shows you to your seat. Pretty little gal brings free coffee in the interval. Amazin' how they can keep up such a service.'
'They only do it for you, Daddy.'
Lord Burford looked surprised. 'Really? You sure?'
'Quite. You wouldn't know. As a rule, most of the other customers are in by the time you get there. But you happen to be a peer of the realm. And they don't get many. It must do wonders for the box office in a little place like Westchester - especially when you turn up in a chauffeur-driven Rolls in full evening dress.'
'Bless my soul.' Lord Burford squared his shoulders. 'You think people still care about that sort of thing in the 1930s?’ 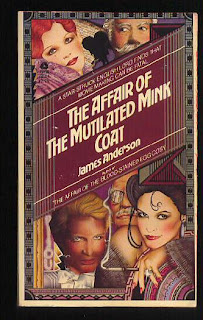 I don’t think I need to say much more. The Affair of the Mutilated Mink is a wonderful tribute to mysteries of long-gone days, done with love and affection. Everything is delightful from plot to characters, and the clueing is perfectly fair. I had a wonderful time listening to an audiobook recording—the narrator really earned his pay, delightfully voicing the various characters, including one of the great fictional butlers, Merryweather. I unreservedly recommend it— this is how a tribute to Agatha Christie should be done. Thanks a lot to Bill from Traditional Mysteries for pointing it out.
Note: Three books in this series were written, the third over 20 years after the first two. Anderson unfortunately died a few years ago, leaving us with only three books in this series. Note that this is the second-- it reveals some minor surprises about the first book, but it keeps mum about the killer's name. Still, it might be wiser to start at the beginning.