"`Twas brillig, and the slithy toves Did gyre and gimble in the wabe..."

Written by Patrick
When I was a child, I spake as a child, I understood as a child, I thought as a child: but when I became a man, I put away childish things. For now we see through a glass, darkly; but then face to face: now I know in part; but then shall I know even as also I am known.
— 1 Corinthians, 13:11-12 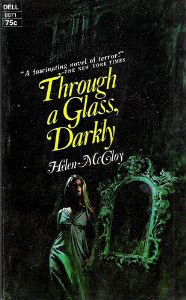 Helen McCloy truly had wonderful talent. Earlier this year, I reviewed her first book Dance of Death. It had flaws, as many first mystery novels do, and although I liked the character of Dr. Basil Willing, I found his method of detection, which relies heavily on Freudian psychology, highly subjective. However, the book was overall a triumph, with a clever murder method, plenty of social commentary that still rang true over 70 years later, and a brilliant motive for the murder. All this made me eagerly anticipate reacquainting myself with McCloy and Dr. Basil Willing, and at last I’ve done so with her 1950 novel Through a Glass, Darkly.
Our story revolves around Faustina Crayle, a young teacher at Brereton School, who is suddenly dismissed by Mrs. Lightfoot, head of the school. Although just a few weeks ago Mrs. Lightfoot seemed happy with Faustina’s performance, she now insists Faustina must leave the school. She offers no explanation and refuses to give her a good reference in the future. Faustina is obviously distraught by this news, and she confides in the only friend she has at Brereton, Gisela von Hohenems. After Faustina leaves, Gisela gets in touch with her old friend Dr. Basil Willing, who comes back to America from Japan to look into the matter.
Dr. Willing comes to Mrs. Lightfoot and demands to hear the story. She is at first reluctant but finally gives in and summons several witnesses to strange events at Brereton. It seems that for the last few weeks, Faustina has been at the centre of a series of mysterious events. She is seen one moment at the top of a set of stairs, but the next moment, she downstairs, insisting she has not been upstairs yet. She is seen painting outside but simultaneously, two girls see her inside resting in a chair. While the doppelganger is seen, Faustina’s movements are slow and languid, as if she was moving in slow-motion… or as if her energy was being channelled elsewhere… 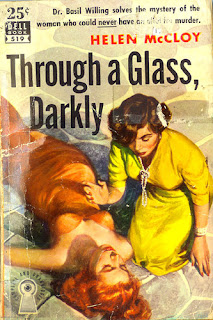 McCloy takes this intriguing premise and runs off with it. Briefly put, this has got to be one of the best “supernatural” mysteries ever written. McCloy achieves dazzling effects thanks to understatements, ambiguities, words that are unspoken but clearly intimated… Her atmosphere is dark and oppressive, and the events themselves are of such a nature that no rational explanation seems possible! The reader begins to doubt in reality, wonder whether this time, there won’t be a clear-cut rational explanation…
This book shows a confident author using her skills excellently. The clueing is far stronger than in Dance of Death; in her first outing, McCloy’s clues weren’t very strong, with the really major ones being dropped pages before the solution. Here, she manages to cleverly conceal evidence throughout the story that leads to a ladder of clues that point in one direction. Overall, the solution is quite satisfying, and it is revealed in a brilliant final confrontational scene which ends on a curiously ambiguous note.
This is a supernatural mystery in the very best tradition of John Dickson Carr, and yet, some marvellous effects have been spoiled thanks to the progress of science. In one passage, McCloy has a character muse about the possibilities of the mind that are uncovered by science… and it’s just the author’s luck that she chooses an example that science can now more or less explain! McCloy seems to have been fascinated by psychology, and Basil Willing is one of the few fictional psychologists who can talk about their profession and not sound like an arrogant pain in the derrière. However, some of the psychology is likewise rather outdated. 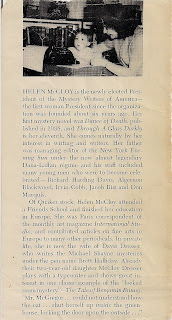 There are a few cures for these minor problems. You could just skip the psychology passages, but that’s rather unwise in any mystery, since you could be skipping over a vital clue. You could try ignoring these effects, but consciously trying to ignore them might only serve to make them more prominent. Finally, you could try doing what I did, and regard this book as a period piece. Simply forget all about Facebook, cell phones, the 21st century, modern science, etc. Allow yourself to be sucked into the world of the early 1950s as described by McCloy. Believe me, with a master storyteller of McCloy’s calibre, this approach is very easy indeed.
These really are my only reservations about the book, and really, that’s through no fault of the author's. This doesn’t seriously affect the quality of the plot or its resolution, and that’s why I’m willing to call Through a Glass, Darkly a masterpiece. It’s such a pity I didn’t read it in time for Hallowe’en—the timing would have been perfect. It is a frightening tale of ghostly doubles that seems to have no rational explanation until the ending. I unhesitatingly recommend it.