Then is the spectres' holiday - then is the ghosts' high noon!

Written by Patrick
When the spooks have a midnight Jamboree
They break it up with fiendish glee
Ghosts are bad, but the one that's cursed
It's the Headless Horseman, he's the worst. 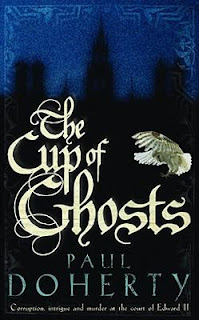 The most remarkable element of The Cup of Ghosts is how carefully researched it is. Paul Doherty constructs a fine narrative around true historical events (as he explains in his author’s note at the book’s conclusion). Someone really did die during the coronation ceremony of Edward II— Doherty tweaks it ever so slightly and turns it into a fine murder. Other people who really existed died within a short span of time, and Doherty plays the role of the Grim Reaper again by despatching them with murders, including one locked-room mystery. And Doherty paints a remarkable political picture of the times, as a subtle chess match is being played out between Philip of France and Edward of England.
Into it all Doherty casts Mathilde of Westminster, based on a real historical figure. She was living with her uncle, an influential Templar knight, when Philip of France moved to crush the order and seize its treasures. Mathilde’s escape was arranged— her uncle wasn’t so lucky. Mathilde is hidden in the best possible hiding spot—smack in the middle of the lions’ den, as Princess Isabella’s dame de chambre. Well, the two quickly forge a friendship, but it’s immediately tested severely. A string of brutal murders take place, and there are whispers that Edward of England might very well refuse to marry Isabella despite a French-English treaty. There’s discontent among the English Lords at the favour Edward shows to Lord Gaveston, and trouble in general is brewing.
I’m not surprised that this series was optioned by ITV—there is so much meat to this story. The mystery is a genuinely good one (although the locked room mystery is frankly uninspired), and when Doherty sets out to thrill the reader, he delivers! There’s one particularly good sequence where Mathilde kills someone for the very first time. It’s a thrilling passage, and as the ending approaches, the thrilling sections are more and more frequent, building up to a good finale.
Unfortunately, what bogs the book down for me are its quiet moments. These just don’t work. Many times, I got lost in lengthy (and largely irrelevant) descriptions of scenery or clothes. Mathilde is a good character, but I really didn’t care for her interactions with the Princess Isabella. Doherty has a weird tendency of giving Isabella the most stilted and awkward dialogue possible, which just kills the scene—time and time again, Isabella reminds Mathilde she is the Princess, her loyal friend, soon to be married to Edward of England. We get it—after a certain point, it sounds like exposition to an audience that has walked in too late after the intermission. It really underlines the artificiality of the character and that doesn’t help to increase my emotional investment in the story. At the same time, this kind of exposition would be so much more appreciated for the side characters: they just kept getting jumbled up together for me. There are just so darn many of them and it’s hard to keep track; I couldn’t distinguish Sir John Such-and-Such from Lord Cecil Thingummy to save my life.
Overall, The Cup of Ghosts is simply not my cup of tea. It’s a good story and it gets much better as it progresses, but for me, it’s the quiet moments that bring everything to a standstill. The title is absolutely great, but it’s just barely justified with a metaphor that one character uses and refuses to explain for 150 pages because that would be too easy. Doherty’s is a fine storytelling talent, and he made me interested to learn more about the time period—I could not distinguish from fact and fiction, and Doherty’s afterword really increases my admiration for his talents. But with so many characters and very stilted dialogue from a main character, the book’s great qualities are undermined by flaws. It’s not my favourite Doherty, but the series has great potential if it can focus a little bit more. At 400 pages, the first half sometimes seems too excessive.