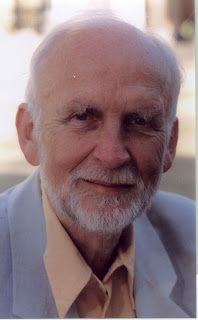 Crime author Reginald Hill has passed away. Many obituaries and tributes have been written, and one of the most touching tributes to Hill that I’ve read can be found on Martin Edwards’ Do You Write Under Your Own Name? I unfortunately never got the chance to meet him or correspond with him, so I cannot mark his passing away with anecdotes about him as many have done. But there is one thing I can do to honour his memory, and so I picked up a book of his to read and review. After all, if I was an author I think the most I could ask for would be to have my books read and discussed (and maybe even enjoyed) after I died.
And so I settled on Reginald Hill’s Killing the Lawyers as the book to read. Why? Well, look at the title: it’s just brilliant! (And ever so cultured, as it is inspired by Shakespeare’s infamous line “The first thing we do, let's kill all the lawyers.” Ol' Bill really had a thing against lawyers, didn’t he?) And as it turns out, the contents of the book were just as good as its title. Published in 1997, it is the third book in the Joe Sixsmith series, starring a black machine-operator-turned-private-eye.
Sixsmith is not having a great day—he’s recently been in a car crash and the insurance company refuses to pay for the car. Intent on doing battle with the big fish, he consults his lawyer, who in the grand tradition of lawyers, sends him to another lawyer, Mr. Potter. So off he goes, but Mr. Potter seems peeved that Joe should consult him, telling him he has no case and all but kicking him out of his office. Irritated, Joe declares that whoever said “let’s kill all the lawyers” was right and walks off… only to make his situation very awkward when Mr. Potter is found in his office a few minutes later with his neck broken! 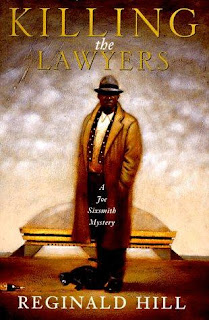 Not long after getting himself tangled in that mess, Joe is contacted by star runner Zak Oto, who has been getting threatening letters demanding that she throw her next race. She’s worried that someone in her family might be implicated and so decides that, instead of ringing the cops, she’ll put Joe on the case and decide what to do with his conclusions.
Joe Sixsmith is easily the best thing about this book. He’s such a fun character— he’s not particularly strong or courageous, he’s not the cynical kind of guy, and he’s black. Many people seem to think he’s just playing games by being a private eye, but he trudges on in a noble cause. He’s a decent kind of person, and despite stumbling over several dead bodies, we don’t get subjected to a tiresome police beating scene. Instead, we get some fine humour, as Joe obsesses over his cat and imagines sarcastic commentary coming telepathically from the feline. There are a lot of great lines, such as one where (to paraphrase) like a bishop in a bath-house, [something] needed explaining.
The plot construction meanwhile is admirable. It’s a very complex, tricky plot and the ending could have come straight from a Golden Age mystery. It’s really quite the treat, and the whole thing ends on a very satisfying note. There are multiple revelations at the end, and I only saw the very last one coming. It was far more obvious than the rest, but hey, with so many twists that I lost count, that’s not a bad batting average at all. 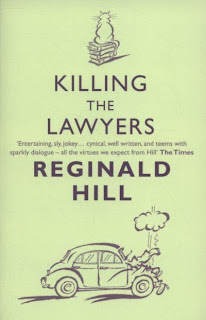 The only potential problem is the characters. Some of them are better fleshed-out than others; some only become interesting near the end. Others are simply not particularly memorable, but to be honest, I didn’t mind. I don’t mind vivid characterisation, but when the story is good, I will put up with even the worst characters. And none of these characters are bad—but over time, several of them will probably go forgotten or jumbled up in my memory.
All things considered, though, Killing the Lawyers is a triumph, and a delightful one at that. It’s a surprisingly funny book although many of its events are more on the hardboiled side. The plot is just as deliciously tricky as anything from the Golden Age, and the writing is just… good. It’s really, really good. It engaged me from start to finish, and isn’t that the idea of writing? You want to get the ficklest of all creatures, the reader, to turn the page and maybe get him to walk out of the bookstore with your book in hand. Well, Reginald Hill certainly succeeded in that aspect, and I can only mourn the loss of a talented writer who touched so many lives. I offer my sincerest condolences to Hill’s family and friends.