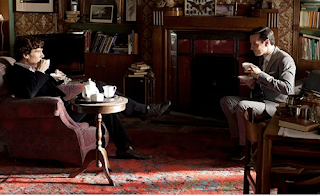 As previous reviews by other bloggers have noted, it’s extremely difficult to review The Reichenbach Fall without giving too much away. This is such a delicious, delightful episode that I really want to keep as many of the surprises in it as possible. With as many twists as we see in this episode, you’d think that wouldn’t be a problem… but I’m getting ahead of myself already.
It all starts out when Professor Moriarty simultaneously breaks into the Tower of London, the Bank of England, and Pentonville Prison. How is he doing this? No idea, but he allows himself to be captured and arrested, and is carted off to trial, where he refuses to give any defense. And that’s all I will say about the plot.
If you’ve read my previous reviews of the recent Sherlock episodes, you know that I am not a fan of the series’ incarnation of Jim Moriarty. He’s just so over-the-top, doing some sort of Looney Tunes impression and trying to outdo all the Bond villains. I didn’t take him seriously in his first appearance (apart from a handful of genuinely creepy moments in his first appearance, particularly the line “That’s what people DO!!!”). So now we get The Reichenbach Fall (a very clever reference there to The Final Problem), where Holmes and Moriarty square off in a duel to the death. Just how well can this episode hold up with such a cheesy villain? 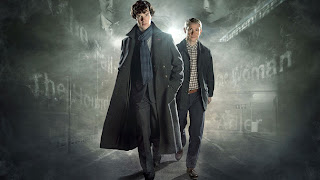 The answer: sweet merciful pudding, is this episode good! It is a grand finale to the season. Moriarty at last becomes a genuine, credible threat. When he breaks into the Tower of London, I was laughing very hard, and then I found myself genuinely creeped out when this over-the-top villain suddenly turned into a sullen, serious-faced psychopath, with occasional bouts of dark humour… just like the late Heath Ledger in The Dark Knight. I found myself genuinely fascinated with this villain, and his evil plan is absolutely brilliant… just wonderful in every respect! The scene where he reveals this plan to Sherlock has a mad combination of dark humour and genuine eeriness. It’s very well-done to say the least, and as much as I’d like to go into more detail here, I really shouldn’t. U. S. viewers, get ready for a treat when this show hits your TV stations. At last, this character comes across as creepy, and it’s even reconciled me somewhat to Moriarty’s first appearance. It all makes sense!
Plot-wise, this episode perfects the idea proposed in The Great Game: Sherlock is given a series of challenges and puzzles, and has to think his way out of many perilous situations. The episode never gets out-of-hand and into blatantly obvious logical inconsistencies. It’s an intellectual duel that is genuinely fascinating. I audibly gasped at several moments and found myself sitting at the edge of my seat at the finale. Once again, forget all you think you know about the original short story, The Final Problem. In this adaptation, you don’t know a thing about where everything’s headed until it gets there. 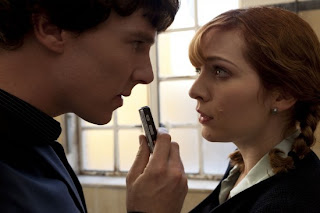 So who’s the writer? It has to be Steven Moffat, right? He’s done the best plots thus far… Actually, no! Surprisingly, the writer for this episode is Steve Thompson, who wrote the extremely sub-par The Blind Banker. But in this episode, he gets the plot construction down pat. And the way he’s managed to cleverly tie it all into The Final Problem is truly fascinating. It very much brings the whole show to modern day and captures the excitement readers probably felt when they first read Conan Doyle’s stories.
The photography and music are again stellar, and although this isn’t a tale of supernatural horror, there is atmosphere to it all. Holmes and Watson are involved in a dangerous intellectual duel and the way they plunge from one situation right into another creates an atmosphere of constant suspense. There are also moments of confusion and shock—particularly when we find out about a reporter’s source for an article on Sherlock. 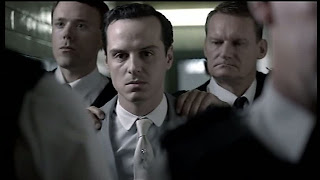 The ending has viewers abuzz, but I think I might have stumbled onto the solution to that. What got me started on this train of thought was an odd bit of dialogue in the final Holmes/Moriarty exchange, and subsequent thinking has revealed another clue to support this theory in another part of the episode. I don’t want to give any hints about the nature of these clues.
Overall, The Reichenbach Fall is the ultimate Sherlock episode. It is exciting, it is cerebral, it is suspenseful and fascinating. It’s captured the very essence of Sherlock Holmes and transposed it brilliantly to modern day. I unreservedly recommend the episode, even to those who, like me, didn’t like Moriarty in previous outings. Everything has led to something truly special in this episode. It’s well worthwhile.