Sherlock: A Scandal in Belgravia

Written by Patrick
For those who are not on board, as episode three of Sherlock (The Great Game) concluded, Holmes and Watson found themselves facing off against the dastardly Jim Moriarty, a character who seemed to be trying to out-do all the Bond villains in terms of being over-the-top and silly. Moriarty threatened to have them killed, only for Holmes to threaten to blow them all up. Just as the confrontation is about to climax, the credits rolled, leaving viewers to wonder how Holmes would get out of this scrape in one piece.

Now comes A Scandal in Belgravia, which resumes from the point at which The Great Game left off… and thank your lucky stars, because Steven Moffat takes over the screenwriting! The series having written itself into a corner with a terrible Moriarty, Moffat takes the character off screen as soon as possible. And he does this with a sort of confidence— at this point, I still didn’t like Moriarty one bit. He was still every bit as unthreatening and laughable. But the show seemed to know where it wanted to go with this character. It seemed to have some sort of a purpose in mind. Moriarty only makes a handful of appearances in this episode and although it doesn’t really make him threatening, it does lead to something special in the third episode. But I’m getting ahead of myself here.

A Scandal in Belgravia is inspired by A Scandal in Bohemia, that famous story where Sherlock Holmes is beaten by Irene Adler. After the episode gets Moriarty out of the way, it launches into an impossible crime, when a man comes to visit Holmes. While his car broke down and he attempted to fix it, he spotted a hiker—and eventually, he spotted the same man dead, murdered somehow but without a single footprint around the body. The police seem to consider this man the prime suspect, but Holmes has a different outlook on things altogether. 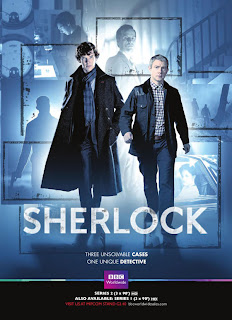 But before that angle can go very far, Holmes is abducted by brother Mycroft, who hires him to retrieve compromising photos of a member of the royal family being held by Irene Adler. Irene Adler is a ruthless dominatrix who claims she doesn’t want money or special favours—the photos, she claims, are just insurance. Thus we launch into the storyline inspired by A Scandal in Bohemia, and I really admire the deft plot construction here. Steven Moffat takes the original story as a starting point, but manages to turn it into something new, brilliantly fresh, inventive, and original along the way. I refuse to say much about it, but yes, the clergyman gambit makes its way into the story, and yes, there are many similarities to the original tale. But even if you think you know where it’s going, Moffat manages to twist the whole situation somehow so that you suddenly realize that you really don’t know where it’s headed at all.
I loved this episode. Just about everything is perfect. The characters of Holmes and Watson are the same, every bit as charming. As for the references to Sherlockiana, you’re in for a treat! There are plenty of references to other cases Holmes investigates. My very favourite is The Geek Interpreter, involving a website about comic books. The second is all about the mystery of The Speckled Blonde. Steven Moffat is one of the best screenwriters today, and these moments are all the more special for his writing. 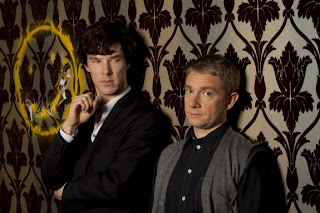 Apart from Moriarty, my main problem with this episode is the solution to the impossible crime. It’s the kind that simply doesn’t leave you satisfied at all because it seems too farfetched. However, it beautifully sets up the idea for the introduction of another famous character from the Holmes series. I won’t say who, but if they do bring this character into the proceedings come Series 3, I will be most excited to see the result.
Irene Adler is wonderfully portrayed by Lara Pulver. (Odd, I never thought I’d say that about an interpretation which casts her as a lesbian dominatrix.)  Her role in the story is simply delicious in its complexity, and her moment of triumph when she beats Holmes is really something! I’ve seen some reviews that take a look at this character and Sherlock’s treatment of her and complain that Sherlock is a misogynist, a complaint to which I briefly answer: “Don’t talk such nonsense—he’s a misanthrope.” 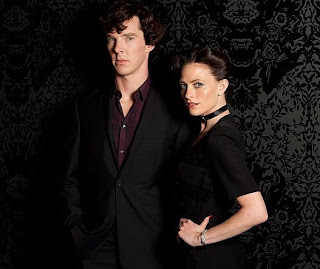 The visuals of Sherlock are fascinating. I’ve been a big fan of these since Episode 1. This is a very visual series, and it’s fascinating how technology is incorporated into the visuals. If Sherlock texts someone, nobody is going to read it aloud, the text simply pops up on screen and the viewer gets to read it at the same time as the character in question. I find it very difficult to describe the visual style, but it is a very effective one which manages to show off the modern-day London setting without getting intrusive.
As for the score by David Arnold, do I even have to mention it? He’s done five James Bond films, Amazing Grace, Hot Fuzz, the most recent Chronicles of Narnia film… He turns out quality work on every production, and this is no exception. (I look forward to the score of series one being released.)
Overall, A Scandal in Belgravia is a triumphant return for Sherlock. While I thought the series had written itself into a corner, it gets itself out of that corner very nicely indeed with physics-defying acrobatics, and then plunges straight into a complex plot that is absolutely delightful from start to finish. It manages to shake off the flaws of the first series and get right to the meat of the affair. I am glad that it was these folks who came up with the idea of Sherlock—they’ve done a fantastic job with it.

Now cue the blatantly obvious CBS ripoff! (But hopefully not.)