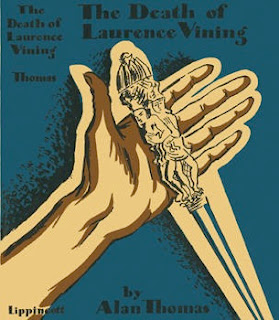 Laurence Vining was not a particularly pleasant man. He was a genius, of course, and the police appreciated his help on the odd occasion where they found themselves out of their depth. In fact, just recently, Vining helped to put a murderer behind bars when the police were quite stumped, solving the mystery of the “Shop Murder”. He solves these cases with the help of his very own Watson, Dr. Benjamin Willing.
But despite Vining’s ingenuity, he’s a callous, cold-hearted man who manages to surround himself with enemies. Yet it’s something of a shock when Vining is murdered in a tube station under seemingly impossible circumstances! He gets into a lift by himself, and the operator sends him down— but at the lower level, when the doors are opened, Laurence Vining tumbles out of the lift dead— a knife plunged into his back. (The knife is a curious Oriental dagger, as a matter of course.)
The police detective in charge of the case is Inspector Widgeon, a competent, no-nonsense sort who will use unorthodox and somewhat unpleasant methods to get results at times. Dr. Willing is eager to help solve his friend’s murder and thus the investigation is launched. Things are complicated when Vining’s Malayan servant disappears, as does his ne’er-do-well nephew. His secretary begins to act fishy. The extremely racist housekeeper also has something up her sleeve. And then there’s one Colonel Robinson…
The Death of Laurence Vining has a reputation as a minor masterpiece of the impossible crime subgenre, and I have to say it does deliver on that front! I tumbled to about half the solution, which is extremely ingenious and well-clued. (I do admit, however, that at one point I got very worried when the author began tossing around potential solutions that defied the laws of probability, physics, and reason all at once.) But author Alan Thomas manages to pull the caper off, and delivers an even better performance explaining the contingency plans. He isn’t satisfied with giving you just the solution; he gives you all the possible things that could have gone wrong with the plan. The murderer (let’s just call the killer Didit and assume he’s male) makes meticulous plans for all these possible scenarios. I think that that is arguably the most fascinating bit of the book, as we get to see excerpts from Didit’s journals chronicling the entire crime.
You might assume based on the description I’ve given that this book is a parody. Well, although it does poke fun at some of the genre’s conventions, especially at the beginning, it isn’t a parody— the crime and its investigation is deathly serious. I think this is the only thing that the book could really have improved on. While the characters aren’t terrible, they aren’t particularly revolutionary or memorable, and a layer of parody could have helped this problem. The book has excellent comic potential—a Philo-Vance-like amateur sleuth is killed, his “Watson” has to try solving it himself, etc. I was thinking along the lines of Philo Vance being murdered by the publisher for being so bloomin’ pedantic! But instead, we focus a lot more on the investigation that on what an annoying fellow the victim could be. The Watson character fades into the background after the opening, popping up intermittently to submit an outlandish solution We’ve seen the ne’er-do-well nephew and his romantic interest before under many names. The only remotely interesting characters are the police inspector and the Malayan servant, Suleiman. (The housekeeper’s unapologetic racism is also interesting—while she’s a nice person in general, her racism is extremely repellent and I can’t help but feel that was the author’s intent.) So although the book’s plot is fine, it tends to sag in the second act when we go through routine with same-old-same-old characters—and while there is some satire, it’s largely confined to the beginning of the book and isn’t the laugh-out-loud type of parody.
But all things considered, despite the somewhat static second act, The Death of Laurence Vining certainly lives up to its reputation as a minor masterpiece. The impossible crime is a genuine delight and even better than the crime itself are the plans Didit makes in case anything goes wrong. Was it worth seeking out? Undoubtedly! I enjoyed myself and if you go for these kinds of books, I think you’ll enjoy it as well. The only problem? It’s not an easy book to find!