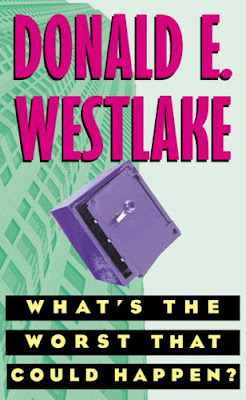 At the start of Donald E. Westlake’s What’s the Worst That Could Happen?, professional burglar John Dortmunder answers the door for a FedEx person, having no idea what he’s about to launch himself into. As a result of his opening the door and signing for a package, his lady friend May Bellamy gets her late Uncle Gid’s lucky ring. She wisely decides that John had better take the ring, because he could use a little luck. So, wearing the ring, off goes John on his next job.
See, a multimillionaire named Max Fairbanks has filed for bankruptcy—though he isn’t really bankrupt. It’s just a fancy way for him to get away with robbing people blind. But in any case, he has a house in the town of Carrport which is supposed to be vacated as part of the legal agreement. Which means the house ought to be empty. That means it’s a perfect target for Dortmunder!
Except he hasn’t counted on one small detail: Fairbanks takes these silly little laws more like suggestions than actual laws. After all, they can’t apply to him, can they? That’s why, when Dortmunder breaks in, Fairbanks is there with a lady friend and is only too glad to call the cops. As a result, Dortmunder is arrested—but to add insult to injury, Fairbanks then tells the cops that the ring Dortmunder is wearing is his ring, and Dortmunder is forced to hand the ring over.
Fairbanks is delighted at the irony and at the delightful story he now has to tell at dinner parties— after all, what’s the worst that could happen? But from that moment on, he’s become a marked man. Dortmunder recruits a whole group of thieves and they go after Fairbanks to retrieve the ring. The only thing is, they keep missing Fairbanks and keep ending up with far more valuable loot.
I’ve been on a bit of a Donald Westlake reading binge, ever since reading the delightfully funny The Hot Rock. Can you blame me? This is a wildly funny comic caper—Dortmunder, usually saddled with the bad luck, keeps getting lucky strike after lucky strike and it only serves to make him mad because he keeps missing the ring. To help out, he recruits plenty of thieves from other books, including a few from The Hot Rock and a former Vice-President of Talabwo (where the only person not trying to assassinate the President is the President). All these characters are positively delightful. 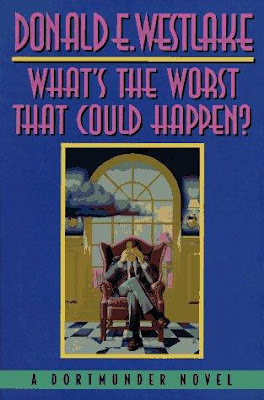 And this leads us to the plot. From what I’ve read thus far this is the closest Westlake has gotten to including an actual mystery in his book. There technically isn’t a mystery to solve—we all know that Dortmunder is the thief, who his accomplices are, how they did it, etc.—but we see a detective at work after one of the robberies. Described as a “roadshow Columbo”, the detective, Bernard Klematsky, decides (for good reason!) that the robbery is a very fishy one and puts together a picture very different from the one the reader knows is true! It’s one of the most delightful aspects of the book, and the resolution to this plot thread is immensely satisfying.
The villain is suitably nasty. While it’s understandable that he’d want to phone the police officers, Max Fairbanks should never have been at his home, and he’s the type of multi-millionaires in expensive suits that takes advantage of legal loopholes for personal profit. And so Dortmunder and his gang are rather like Robin Hood: they tackle a fat cat who’s gotten too big for his britches and redistribute his wealth among the poor—meaning themselves. It seems like a rather drastic thing to do to someone who merely stole a ring, but throughout the book, Fairbanks shows himself to be such hypocrite that you really relish his downfall as planned by Dortmunder. The finale, taking place at a Las Vegas casino, brings together criminals of all sorts in a whizz-banger of an ending that leaves you applauding for more!
Overall, it’s a wonderful book. You’ve got Dortmunder out for revenge and on a roll against the kind of villain who needs to be brought down a peg or two. You’ve got Westlake’s customary sense of humour (Andy Kelp objects to the term thief: "Personally I prefer the word crook. I think it's jauntier.") and you’ve got a delightful story with a magnificent final act in Vegas. (And hey, there's even a burglary in the Watergate hotel!) What’s the worst that could happen?
Well… it could be made into a terrible movie starring Danny DeVito and Martin Lawrence. But what are the odds of that happening?