Written by Patrick
I hope you people have fun with your words. But I don't care if you call yourselves the Red Cross, you owe me forty-five thousand dollars and you'll pay me back whether you like it or not.
—Parker; The Hunter 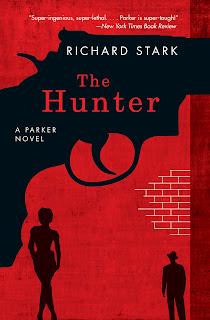 I’m not entirely sure how to kick off this review. I tend to follow a formula: first introduce the plot; then talk about the book as a whole: setting, characters, the plot’s quality, etc.; and finally sum everything up in a paragraph containing the word “overall” somewhere. But today’s book, The Hunter by Richard Stark (really Donald E. Westlake in disguise) is very different from the kind of book that I usually review—it isn’t really a mystery in the proper sense of the word, unless you’re working in a bookstore. So how to begin? Well, in the blog’s time-honoured tradition, I’ll take the cleverly-lazy way out and let someone else do the talking for me. The following text has been unashamedly stolen from William L. DeAndrea’s Encyclopedia Mysteriosa (an invaluable reference tool for the mystery fan):

“One night in the early 1960s, car trouble forced author [Donald E.] Westlake to walk across the George Washington Bridge between New Jersey and New York on a winter evening. The wind and the cold and the cars zooming by made him feel very alone and very alienated. He began to wonder what sort of person would belong in that sort of environment.

The result was Parker, a professional thief shot and left for dead by his associates and his wife. When he is introduced, at the beginning of The Hunter (1962; British title Point Blank), he’s walking across the George Washington Bridge, planning his revenge.”

The opening scene DeAndrea mentions sets the mood of The Hunter right off the bat. This is a dark, gritty tale that makes no apologies and holds nothing back. We are plunged into the underground universe of master thief Parker, a man who is utterly amoral. He has no redeeming qualities whatsoever— he makes Mike Hammer look like a kitten. So… why exactly is the reader cheering him on?

We find out that Parker was involved in a heist when he was betrayed by a man named Mal Resnick. (I’m sure the choice of name was no coincidence.) Mal decided to bump off everyone else involved in the deal so that he could run off with the money and pay back a debt he owed to a crime syndicate known as The Outfit. He got Parker’s wife Lin to shoot Parker after the heist was finished. Caught off his guard, Parker was left for dead and Mal set fire to the house he’d left Parker in. Mal spares Lin only so he can take sexual gratification from her – he knows that she doesn’t dare squeal on him and for a while he takes joy out of this perverted form of sexual torture. 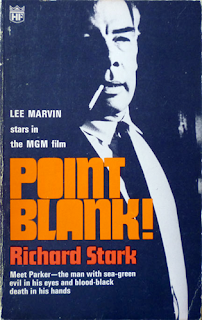 But by the time Parker makes his way back into New York City, Mal’s passion for Lin has cooled. She has become a shell of a woman, unwilling and unable to satisfy his sexual cravings. So he moved out, though in consideration of their criminal history he sends her $1000 on the first of every month. As luck would have it, when Parker comes to call on Lin, the next pay-off is to take place in a few days. He decides to lock Lin in her room… and she commits suicide by overdosing on a sedative.

Parker is furious. Never before has he felt love and hatred for somebody— he doesn’t even hate Mal. He simply has a score to settle. He doesn’t feel comfortable with his emotions for Lin and so he supresses them. He gets rid of the body and mutilates the face so that the police don’t try to identify her by circulating photos in the newspapers. He wants to catch Mal off guard—let him enjoy himself and think he is safe while the storm-clouds gather…

Ah, so that’s it, right? Parker may be an unscrupulous blackguard, but the injustice he suffered explains why the reader wants him to come out on top. Right? Well… you can’t sum up this character in such simple terms. We find out that Parker was planning to murder Mal— in fact, his wife shot him as he was about to leave the room and carry out the deed. So why is Mal the villain? Wasn’t this self-defense? Oddly enough, no. Mal carries his treachery further than Parker ever imagined. Parker kills when it is necessary, and he considered it necessary in Mal’s case because Mal is an incompetent; a coward; a squealer. Mal not only killed all his partners, he got others to do the crimes for him in a singularly spineless way. I won’t describe the character of Mal in detail here, but suffice to say that you feel Parker is entirely justified in going after him.

See, although Parker is amoral, that doesn’t make him a one-note character. His complexity is what makes The Hunter such a fascinating read, even though it’s the kind of novel I never would’ve imagined liking! And it is Parker’s complexity that, in my humble opinion, places him miles above Mickey Spillane’s Mike Hammer. Mike Hammer is a sociopath with a gun, and the stories tend to read like Mickey Spillane’s wish-fulfillment fantasy: a violent hero gets to beat up everybody else and he doesn’t care or have to consider any consequences. Hammer for some reason has all the gorgeous blondes either taking off their clothes for him or willing to do so at the drop of a hat. Throughout the proceedings Hammer is either tough (jumping at every opportunity for vicious violence, which he describes with glee) or self-righteous, to a practically laughable point. In a word, it is simplistic fascist dreck. 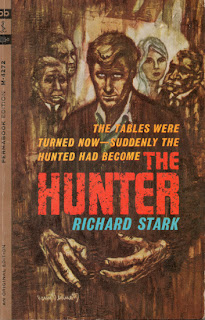 That’s not Parker. If he has to, he will kill your little sister and it won’t cross his mind to apologize for it. And yet, when he accidentally kills someone in this book— a death that was completely unnecessary— he does feel some sort of revulsion. Yet you’re not quite certain whether it’s revulsion at his own action or revulsion at the fact that he’s just added another murder to his criminal record (which already includes murder as well as escape from prison) and alerted the police to his presence in New York. Parker is a master planner and a tough customer who will single-handedly tackle a criminal enterprise if he has to. In fact, that’s just what he does in this book, and it sets in motion plot threads that will probably resurface in other books in the series, which means that it’s probably best to read this series in order.

Overall, The Hunter is one fascinating read, and my opinion of Donald E. Westlake has risen even more after reading this book. This isn’t a mystery— there is never a crime to solve, let alone clues to build up to a solution— but sometimes, when you read a crime novel, the presence or absence of a mystery puzzle doesn’t seem to matter much. This is the case with The Hunter. It’s dark, grim, and unapologetically hardboiled in every sense of the term. The main character is completely amoral, yet you end up cheering for him nonetheless. And the story, told with great poignancy and dramatic power, sucks you right in. Even without a mystery to solve the story manages to be fairly complex. And the writing is just brilliant.

I suppose that’s what gives me the most pleasant surprise. Having recently read and reviewed The Hot Rock, I knew Donald E. Westlake had talent and could write a side-splittingly funny comic crime caper. But under the Richard Stark penname, he managed to write a fantastic story that was very grim and dark in tone. Presumably there are other titles this good, if not better, in the series. The more hardboiled stories I read, the more I learn to appreciate the style on its own merits, not those of a style I happen to personally prefer. I don’t think you could ask for a much better series debut or a much better crime novel. You could ask for a funnier one, but for that kind of book, simply look up the titles published as Donald E. Westlake. If you tend not to go in for hardboiled stuff, you might be better off doing just that. But if you do like hardboiled stuff, or if you want to take a risk and try something different, The Hunter — rather to my surprise — earns my recommendation.

Below is a great interview with author Donald E. Westlake on Parker and this book in particular.