Murder is Our Business 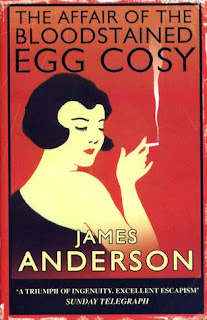 James Anderson’s The Affair of the Mutilated Mink was a wonderful tribute to the finest Agatha Christie novels. You had the country house setting, the “Bright Young Things”, the ingeniously tricky plot, and plenty of respect for the original material. And in a delightful move, the book was set not in the historically-accurate 1930s, but in the universe of 1930s Golden Age mysteries, where murder among the upper classes is taken for granted and Inspectors Appleby and Alleyn are a telephone call away.
That being said, it was the second volume in a series of books and it did give some hints as to the plot of the first book, The Affair of the Blood-Stained Egg Cosy. All this time later, I’ve had plenty of time (and plenty of books!) to forget these hints. So what better thing to do than to return to Alderly Hall, back to the estate of Lord Burford, back to his family and one of the all-time great butlers, Merryweather.
No crime has yet involved these people, so Lord and Lady Burford are not at all alarmed when a country house party gathers for the weekend. After all, the American millionaire and his wife are just there to look at Lord Burford’s gun collection. And that nice young man who practically invited himself is simply writing a book on English country houses. And the distinguished foreign diplomats are there at the invitation of Richard, the Earl’s brother, in order to talk business about something-or-other quietly. And then the baroness shows up quite out of the blue…
Before long, murder strikes, and since Alderly is protected with a state-of-the-art burglar system, it quickly becomes clear that somebody in the house was involved in the mysterious goings-on (alas, this rules out that ever-so-convenient passing tramp). Inspector Wilkins is not at all happy; “I’m not sanguine at all” he complains. He hasn’t got the skill or intelligence to trap one of these clever murderers you read about all the time in the papers. It’s obviously a job for Scotland Yard. 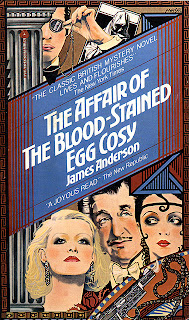 Or is it? Despite his protestations, Wilkins shows a sharp mind and resolves the case in grand style that wouldn’t have embarrassed any Grand Master of the Golden Age of Detective Fiction. (In fact, being ordinary didn't bother Leo Bruce's Sergeant Beef.) The setting, a fictionalised 1930s straight out of Golden Age novels, again adds a fascinating layer to the proceedings. It’s all tremendous fun.
And yet… I didn’t enjoy this book as much as I enjoyed The Affair of the Mutilated Mink. It’s plenty of fun to be sure, but I found the plot far easier to unravel and far less surprising. Then again, how much can be blamed on this book, and how much of the blame should rest on the other book’s shoulders? If you know that the clue discovered in the sailboat “last time” was a red herring, you will look in the right direction when everyone wastes their time conjecturing about what the clue could mean. And as a result, the twist seemed to me to be far more obvious.
So my recommendation is to read this book before you read any of the others in the series. Despite my feelings on the obviousness of the mystery, it’s still a jolly good read. It is a nice homage to one of the great talents of the Golden Age, Agatha Christie, and unlike some people, Anderson shows tremendous respect for Agatha Christie and her fine work. He does a good job imitating her style and conventions while making the book his own.