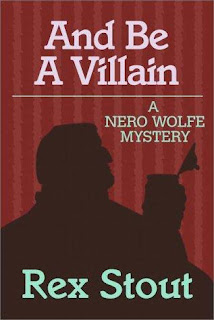 Nero Wolfe doesn’t enjoy work, but he is forced to do so by powers he cannot possibly control: the popularity of the series and the rate at which author Rex Stout’s pen flowed. This time, the International Revenue Service can be added into the mix. Wolfe needs to pay his income taxes, but he needs some more money. So after some prodding by his assistant Archie Goodwin, Wolfe sends Archie to offer his services as a private detective to Madeline Fraser, a radio talk show host who has gotten involved with a now-notorious murder case.

See, Miss Fraser did a bit of advertising on the radio not unlike the old Petri Wine plugs in the Sherlock Holmes radio plays. In these segments, she and her guests would open up bottles of a drink called Hi-Spot and drink it, all while eulogizing the merits of the drink. Nero Wolfe, whose palate revolts at such atrocities, insists Miss Fraser is a dangerous woman. But it’s all quite harmless… until one of the guests, Cyril Orchard, drinks some cyanide-laced Hi-Spot and dies during the live broadcast (ah, irony!).


Still, whether or not Miss Fraser is dangerous, she happens to be rolling in dough, so Wolfe has no qualms whatsoever in offering his services for the hefty price tag of $20,000 plus expenses. (The book was first published in 1948; in modern day, this is equivalent to nearly $190,000!) The sponsors, radio station, and Miss Fraser then begin a Royal Rumble as they fight amongst themselves who should have the honour of hiring Nero Wolfe. 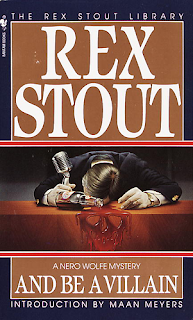 I’ve been busy reading the Nero Wolfe stories in as chronological an order as I can. I skipped over Too Many Women with malice aforethought, for the excellent reason that I don’t have the book. That left me with the next book in the series, And Be A Villain. The title is a quote from William Shakespeare’s Hamlet, and the book is infamous as the first in the Arnold Zeck trilogy. Arnold Zeck is the Moriarty to Nero Wolfe’s Holmes. He’s kept very much in the shadows in this book and only appears on the telephone, warning Wolfe to get off the case and not to make any trouble for Zeck. Wolfe hints that if he is forced to destroy Zeck one day, he will do just that—which seems to me to be a case of foreshadowing the final showdown. In any case, although Zeck plays a small role, he is indispensable to the plot of And Be A Villain.

Which is a good thing—this is one of the best Nero Wolfe plots I’ve come across in a while. There is some actual detection involved here; you’re given all the clues instead of having Saul Panzer, Fred Durkin, and Orrie Cather collect the clues off-stage. The mystery is nice and complex, with plenty of revelations that turn the entire case upside-down multiple times. There are some unexpected connections that Wolfe makes out of the blue, but at least he admits these were long shots and he does so long before the dénouement, so the apparently-remarkable coincidence that was at work to make this plot possible is forgiveable. Plus, I was stumped— then again, I’m the foolish mortal who couldn’t solve the Jonathan Creek episode The Omega Man, so that’s not saying much… (Although in my defense, I did solve Murder on the Orient Express…) 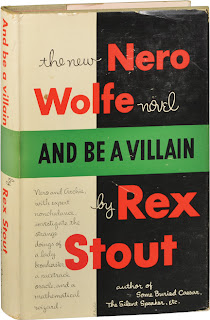 But as usual, this book simply wouldn’t be the same without Wolfe and Archie handling the case. These two are delightfully mismatched. Archie, the man of action, wants to go and do something and solve the case, while Wolfe would prefer it if the police department earned his $20,000 fee for him. This spawns some of the duo’s most memorable arguments, which eventually results in Archie composing a harsh editorial letter to spur Wolfe into action. There are many memorable moments from that eternal wise-guy Archie. In this book some moments that stand out are when Archie gives the police trouble, when he muses on Wolfe’s laziness, or when he manages to get rid of news photographers who came to Wolfe’s office for a photo opportunity.

Overall, I found And Be A Villain a major success—in fact, I’d call it a masterpiece. (I seem to be using that tag in spurts in 2012—I won’t use it for weeks but then there’ll be one week where I use it seven times.) The book really delivers on its plot and the hype of meeting Arnold Zeck for the first time was justified. I enjoyed his introduction and found it an intriguing way to open up his showdown with Nero Wolfe. The plot is very-well constructed, and you’ll find some of the best Wolfe-Archie banter and some of Archie’s most memorable moments. I cannot recommend it warmly enough.