Written by Patrick
A while ago I started watching the Japanese TV series Trick, which dealt with impossible crimes being investigated and solved by an unlikely duo: a physics professor and a magician. The magician, Naoko Yamada, constantly gets fired and is hounded by her landlady for rent. The professor, Jiro Ueda, is a sceptic of all things supernatural, but manages to get easily puzzled over apparently-impossible feats such as mind-reading and locked-room murders. There are several other recurring characters, such as the bumbling Detective Yabe and his incompetent assistant. 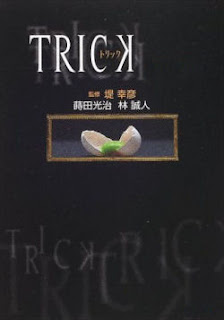 While the series is interesting as a whole is interesting, it does tend to focus quite a bit on comedy, which leaves me at a disadvantage. I’m not Japanese, nor do I know much about the Japanese culture and mystery tradition. I was left at the mercy of at-times-terrible subtitles, and thus missed out quite a bit on things like wordplay—in one case, wordplay is at the heart of the solution. In addition, the style of the series was completely new to me, with all sorts of bizarre angles and jump cuts that to my mind often made little sense. That might just be the typical way Japanese TV works, but it was new to me. In addition, the production values were extremely low; the series at times looked like a low-budget TV series from the 1970s. Fortunately, the show’s true value was elsewhere, so although it was distracting at first, I got more and more accustomed over time. (I’ve already started on Season 2 and I can already say the production values are miles above those from this season.)

Yet with that being said, there was still enough merit in the series that it caught my attention and I ended up watching the entire first season with no regrets. (Besides, how could I regret watching a show with such an awesome, yet extremely brief, theme song?) Anyhow, here is an analysis of the first season of Trick:


Episodes I-III
In these episodes, Naoko and Ueda first meet, after Ueda places an ad in a newspaper offering a reward for anyone who can show him genuine psychic phenomena. Naoko manages to fool him and this launches them to investigate a cult known as “Mother’s Spring”. The leader is known as Big Mother, and she claims to have mind-reading abilities. She is also known to levitate… and nasty deaths often come to those who attempt to betray her!

The mystery is interesting, in that a lot of great tricks used by fake mediums/mind readers are exposed. Some are less certain and rely more on psychology than others, but they’re interesting to see. The big problem is that the episodes leave gaping plot holes—a mysterious death in Episode I is left unexplained by the end, for instance. And although a locked-room poisoning occurs, the solution is a terrible cheat, because it relies on the locked-room not really being a locked room in the first place! A terrible let-down to an otherwise enjoyable little mystery.

Episodes IV-V
In these episodes, Naoko and Ueda investigate the mysterious doings of one Miracle Mitsui, who claims he can make things disappear by sending them to another world. He demonstrates his power by… making an entire village disappear! Next, he makes a police officer disappear, an ancient stone structure vanishes into thin air, and the head of Dr. Ueda goes missing, also presumably to the “other world”!!!

This episode is an improvement over the last one, but it still has problems. Some of the tricks are incredibly obvious, and it’s kind of hard to keep a straight face when you find something important out. The episode also misses a glorious chance to end the fifth episode on a real kicker of a mysterious and apparently-impossible disappearance, so that the chosen ending is a bit of an anti-climax. However, police officer’s disappearance is wonderful and some of the tricks performed by Mitsui are really worthwhile.

Episodes VI-VII
Kurosaka Miyuki happens to be a beautiful woman, and Ueda is instantly crushed when he sees her. There’s just a slight problem: she’s a murderous psycho who swears she has spiritual powers and will use them to kill three men. (Why are the gorgeous ones always psychotic?)

And it happens! Although Naoko and Ueda keep guard over her, at 10 PM, their prisoner gets up and strangles an invisible person with an equally-invisible belt. When the deadly pantomime is finished, she claims she has just killed Umeki Ryuichi. Ueda goes to look at the spot where she directs him… and sure enough, a corpse is discovered, belonging to one Umeki Ryuichi… and he was strangled at about 10 PM!

In the highlight of these episodes, a seemingly-solid case is constructed by Naoko where Kurosaka murdered Ryuichi in person, but the woman laughs it off and proceeds to savagely tear down every last shred of the case, proving it to be nonsense from start to finish. Then, she picks up an invisible knife and begins stabbing wildly at the air, only to be sprayed with blood!!! When the next victim is discovered, the blood type of the victim proves to be identical with the blood type of the blood that spattered onto Kurosaka… who was nowhere near the crime scene at the time! 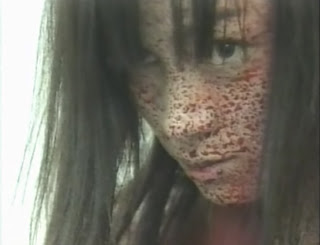 Unfortunately, the ending fails to live up to the promise of the first half of the two-parter. The solutions to the first two crimes are dull and uninspired—in fact, it’s one of the oldest and worst cheats in the book. The third crime should never have occurred, but did so due to the sheer incompetence of the police. And while that’d be okay if the solution to the third crime was good, the solution is a variation on one of the oldest and most boring tricks in the book. But I do like the ending of this story, despite my reservations on the solution.

Episode VIII
A short episode, this one, where Naoko exposes a fake mind-reader. Although he gives impressive demonstrations, they are exposed due to wordplay that can make sense only in Japanese. The non-Japanese viewer is left at a severe disadvantage, but there’s nothing particularly special about the solution in any case. It also has a serious limitation—the method is acceptable, but the results brought about by this method are as wildly improbable as those in the Jonathan Creek episode The Seer of the Sands. Is it good? Yes. But it’s still flawed.

Episodes IX-X
The last episodes are a kicker, as Naoko finally comes face-to-face with the spiritualist who killed her magician father years ago. The answer is brilliantly ironic and sets up a wonderful paradox for the series as a whole. The episode is a fun one in that several tricks are exposed—such as how to bend a steel bar through willpower—and the explanations for the most part are quite solid. I liked the concept and the execution, and the comedy is fairly good, surviving the language barrier. The only thing really missing was a kicker of a locked-room mystery puzzle, but the episodes as a whole make its absence as inconspicuous as possible… besides, when there’s buried treasure to be found, locked rooms are not vital!

And that’s Trick, season one. Much of its comedy (and in at least one case, the key to the mystery) flew over my head because I’m not Japanese, but even despite the language barrier, the series made for some excellent viewing. When the comedy works in such a way that language is not an obstacle, it really works well… such as when police officers in episode 1 ask a physicist if it’s possible to trigger an earthquake on demand by having a lot of people jump up and down!

But be warned: the humour might not be to everyone’s taste. I’m sure there’s a lot of cultural stuff at work here as well, but there’s a lot of sexual humour involving Ueda’s—er, God-given gift (which is apparently enormous)—and Naoko’s—er, I’m not sure how I can paddle my way around this one. You don’t actually see it, but some people might not like the mental pictures involved either way. I think that this is one of the rare cases where this kind of humour is (most of the time, at least) genuinely funny, so I didn’t mind. 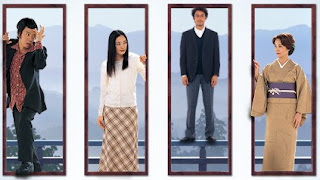 That being said, the mysteries often leave plot holes you could drive a dairy farm through. Yet they’re all worth watching. They expose several tricks used by fake mediums and spiritualists and some of these are highly impressive feats with simple solutions! The locked rooms and other impossibilities are not nearly as satisfying at times—in particular, the episodes dealing with the Pantomime Killer come up with some good false solutions but fail miserably with the real solution by making them hinge on the worst clichés in the genre.

There’s a lot of good chemistry between the lead actors, and a lot of the storylines are intriguing. Sometimes the tone of the stories are slightly uneven, but that doesn’t interfere with the viewing experience. (The atmosphere in season 2 seems much more established from what I’ve seen.)

That’s pretty much all I can think of saying! I enjoyed season 1 of this series and I hope to be able to review the other seasons in the near future. It’s definitely enjoyable to watch!