Return of the Peculiar 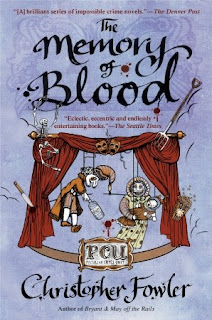 When I reviewed Christopher Fowler’s The Victoria Vanishes, I quickly recapped my opinion of the Bryant and May series of books. Although I loved the first ones, when White Corridor came, I was instantly turned off. Although White Corridor had a clever plot, it took forever to get anywhere, had plenty of psychotic characters, and was just dull, dull, dull. The Victoria Vanishes was an improvement of sorts, but had a laughable solution and some other problems.

But I was very intrigued by the plot summary of The Memory of Blood, the ninth Bryant and May novel. The extremely rich Robert Kramer hosts a party for the cast and crew of The Two Murderers, a lurid play with plenty of gratuitous sex and violence. Everyone is there: Robert’s wife Judith, the leading man Marcus Sigler, the director Russel Haddon, the scriptwriter Ray Pryce, and plenty more. Suddenly, Judith comes to Robert and tells him that the door to their baby Noah’s room is locked, and she had left it open. And to make a long story short (too late), the door is broken down and Noah is missing—he’s been thrown out of the window! But how was it done? A malfunctioning lock makes it impossible for anyone to have locked the door from the outside! But the most grotesque thing about this business is that the puppet of Mr. Punch is no longer on its hook—instead it is lying inside the room, as if he came to life and threw the baby out the window…


It’s up to Arthur Bryant and John May, heads of the Peculiar Crime Unit, to solve the case! But the killer keeps striking, and directly challenges the PCU to stop him! And not only that, the daughter of a prominent government official is implicated, which makes the whole thing an even trickier affair… and into it all, Oskar Kasavian attempts to muddy the waters by throwing false leads in the PCU’s face! There’s also a second storyline, when the girl helping Bryant to write his memoirs is found dead, apparently the result of bacteria poisoning… and yet a disc containing sensitive information that could put National Security at risk is missing! 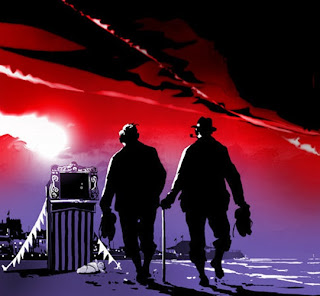 After the disappointing downwards spiral of the last few PCU books I read, The Memory of Blood is not only a return to form for Christopher Fowler, it is the best PCU book in the series! There are no infuriating digressions to ponder the symbolism of a trapped butterfly! There’s no moments of I-wonder-why-society-is-so-damn-cruel. The focus is on the bizarre mystery, and it’s very much worth focusing on! It’s a very plot-intensive book. Even some familiar elements are given new life—I’ve gotten very used to the attempts of Oskar Kasavian to shut down the PCU, but that continuing story arc is given an ingenious and fascinating new twist in this novel.

And yet, as good as the story is, Fowler doesn’t seem to have confidence in his clueing abilities. We find out the vital clue for the locked-room problem eight pages before the killer is unmasked—and this solution is not a particularly special one. The killer’s motive feels pretty much arbitrary, although there is a smack-obvious clue in retrospect that pointed to the killer the entire time. I didn’t solve it but that was because I’ve gotten used to Fowler cheating the reader with his clues, and so I didn’t even try.

All the elements that make the Bryant and May books so fun appear here. Bryant and May themselves are delightful as ever. If you ever wondered what Sir Henry Merrivale would make of modern times, look no further than Arthur Bryant, who must certainly be a cousin of the Old Man’s. I was pleased to see Raymond Land treated as a decent human being, and not as a punching bag for the rest of the PCU to abuse between them. The plot has all those bizarre elements that Bryant and May keep stumbling across, and there’s plenty about the history of Mr. Punch and the theatre of Grand Guignol, and so on. 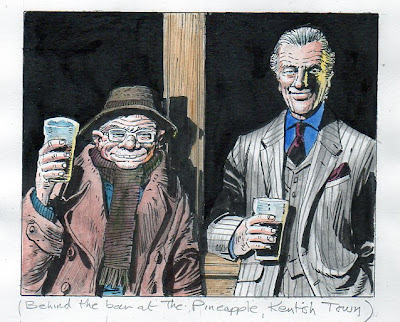 And Fowler’s writing is brilliant. He effortlessly keeps the plot going, and yet we get to know several characters intimately. The tragedy of Noah’s murder is treated as a tragedy and Fowler handles it better than a lesser writer might. Although there are no 50-page moments of asking “who could kill a baby?” the question does pop up and the discovery of the murder is very sickening indeed. Yet for once, this book contains no passages of excessive social commentary. It’s a very complex and bizarre plot and Fowler does it justice.

Overall, The Memory of Blood is a bizarre book yet a brilliant one. It’s the best of the PCU novels in my admittedly-humble opinion and a delightful romp from start to finish. It’s a pretty plot-intensive book—the antithesis of the overly-long and boring White Corridor. The locked room doesn’t contain the ingenuity of the locked room mystery in White Corridor, but the blurb writer isn’t playing “let’s drop cutesy hints about the solution” with this book either.

If you enjoy Bryant and May… oh boy, you’re in for a treat!