Hail to the Queen (of Crime)! 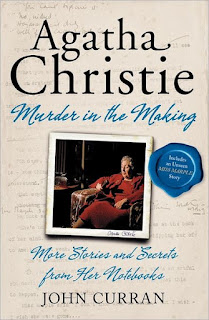 Devoted readers of this blog (all three of them) might remember a review I did back in April of John Curran’s Agatha Christie’s Secret Notebooks. I concluded the review by warning readers to keep an eye out for a review of the sequel, Agatha Christie’s Murder in the Making. Well, it’s been almost two months now, which for me is probably a record time.

Despite all the recent Batman reviews and a very negative Ellery Queen review, I remain a devoted fan of the traditional puzzle-plot mystery, and one of its greatest practitioners was Agatha Christie. Indeed, until I discovered John Dickson Carr I considered Agatha the greatest. Which is why I was very interested in John Curran’s two books, examining the notebooks that Agatha Christie left behind. Agatha Christie’s Murder in the Making is his second volume and contains much of the material that was left out of the first book, Agatha Christie’s Secret Notebooks.

In this second volume we get a closer look at some of Dame Agatha’s novels, particularly those left out of the first books. Of particular interest is the original draft of the final chapter of The Mysterious Affair at Styles. There are also discussions about some of Christie’s best books, including the brilliant After the Funeral, The Body in the Library, and Curtain: Poirot’s Last Case. There’s also an alternate (and in my opinion, far superior) version of the Miss Marple short story The Case of the Caretaker (here, The Case of the Caretaker’s Wife). And wonder of all wonders, one of Christie’s earliest short stories also (re)surfaces!

As was the case with the first book, Mr. Curran does an admirable job looking through Christie’s notebooks and giving some fine insight into her creative processes. This makes for a wonderfully entertaining read, and the preface in which he reconstructs the birth of an idea is quite simply remarkable. But a big plus is the classification system. In Agatha Christie’s Secret Notebooks, books were discussed under “themes” but because one book could fit into multiple categories, it made the entries somewhat confusing at times.  Now, in Murder in the Making, John Curran decides to adopt a chronological approach, which makes everything flow far more smoothly.

This comes at a disadvantage, however, in that it leaves the last decade of Christie’s life as the concluding note of the book. What an anticlimactic way to conclude such a fine survey: analyses of those monstrosities, Passenger to Frankfurt and Postern of Fate! But wait! John Curran works his way out of this corner brilliantly. Throughout the book he has strategically placed sections of “unused ideas” Christie could never get around to. (These include the glorious idea of Christie writing a Cluedo-based novel!) But after the analysis of Postern of Fate, Curran pulls out his best card and he places it in on the table: an idea Christie began to toy with but could never flesh out into novel form. It’s a genuine shame: it shows Christie’s imagination never dried out and that up until the end she was her devilishly ingenious, creative self. The idea is far more psychological in approach, something that you’d expect from Margaret Millar— but Christie had several interesting ideas about where the plot could go, and one of them contains all the flash of the Christie of yesteryear. It’s a bit of a bittersweet ending to the book, but it leaves you remembering Christie the brilliant mastermind and fiendish plotter.

Although the wording may sound a trite cliché, if you liked Agatha Christie’s Secret Notebooks you’ll love Agatha Christie’s Murder in the Making. The material is better organized and just as interesting, and the unused ideas are all fascinating, especially the final one. The critical analysis is always honest and fair, and as a reference tool, it is invaluable to the Christie fan. Considered as a single volume with its predecessor, it really is the finest book on Christie that I have read since Robert Barnard’s A Talent to Deceive.

Note: I had the great honour of being able to interview John Curran himself yesterday! I'm busily editing the interview at the moment but once it is all done I will proudly share it all with you on this blog! Stay tuned, and don't fear-- "soon" in this context will not mean two months!