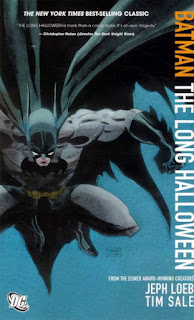 By now, readers of the blog are probably well-familiar with my recent spate of Batman-related reviews: short Batman stories written by various authors and collected in book form by the late Martin H. Greenberg. These reviews are an opportunity for me to change genres a little bit without straying too far from the blog’s focus on mysteries. It’s also a neat way for me to count down to the release of The Dark Knight Rises.

But this led to a very serious existential question: why stop there? Why not go all the way and actually review a mystery comic book (preferably with Batman in it)? After all, I’ve criminally neglected comic books on this blog—my only previous comic book review was of an adaptation of Paul Halter’s The Demon of Dartmoor. Thus began my hunt for successful mystery comic books, as I asked around various places for suggestions. I got some really great, intriguing suggestions: Watchmen, Blacksad, 100 Bullets, Powers, Batman: The Black Mirror… and then there’s today’s book, Batman: The Long Halloween. 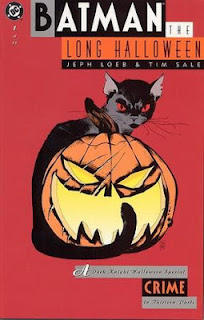 Written by Jeph Loeb and drawn by Tim Sale, The Long Halloween has gone down in history as one of the greatest Batman comic books of all time. It was a major influence on Christopher Nolan’s Batman films, particularly The Dark Knight. It retells the tragic origins of the villain Two-Face, who was at one point Gotham’s District Attorney, Harvey Dent.

But the story is far more complex than that little snippet might suggest. It is set early on in Batman’s career, sometime after the events of Year One. Carmine “The Roman” Falcone, the untouchable head of the Falcone crime family, is engaged in a bitter feud with his rival, Salvatore Maroni. The tensions are stretched out to a boiling point and they finally explode when a mysterious serial killer begins to prowl the streets of Gotham. Dubbed the “Holiday Killer” by the newspapers, the killer strikes on holidays and his murders target members of the Mafia.

Who is the Holiday Killer? Harvey Dent soon becomes obsessed with the case, and this leads him to eventually transform into the murderous villain Two-Face. This comic book does a terrific job at retelling Two-Face’s origin story. It shows you just what a tragic figure he is. It leaves Jim Gordon and Batman with a serious conundrum: is solving the case really worth the price they had to pay? Remember, this is still early on in Batman’s career and so it leaves him conflicted. Is Batman really cleaning up the streets or is his presence attracting more “freaks” like the Joker, the Riddler, or Poison Ivy to town? 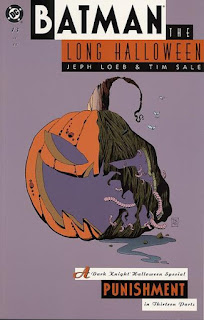 Considered purely as a Batman story, The Long Halloween is an unequivocal triumph. Jeph Loeb does such a great job of incorporating some of Batman’s most farfetched villains in a realistic and rather disturbing way. The Joker is a major part of the story. The Riddler is also very important. Catwoman is there to provide a mysterious presence (her motives are unclear throughout the story) and she also banters a lot with the Batman. The Mad Hatter makes up a minor role, but as he is my personal favourite villain I practically fainted with delight to see him there. The Scarecrow is here. So’s Solomon Grundy! And Poison Ivy! And the Penguin makes a brief blink-and-you’ll-miss-it cameo…

Among all the storylines, you’ll notice many references sprinkled throughout The Long Halloween to other things. Particularly important is, I feel, the opening panel, which is the book’s most blindingly obvious reference to The Godfather. Many of the characters, situations, and lines make references to parallels in The Godfather, which only increases my fascination with the book. While the line “I believe in Gotham City” sounds a bit forced the first time you hear it, the whole concept of believing in something becomes extremely important as the book progresses, and the final scene is a deliciously clever way of mirroring the opening while showing how far the idea has progressed.

Another important reference to consider is the one made by the role of Julian Day, the “Calendar Man”. Day is one of the inmates at Arkham Asylum and everything about him suggests the villainous Dr. Hannibal Lecter from The Silence of the Lambs. The way he is drawn, the way we meet him in the cell, his role as one of the “freaks” that the law consults to try and catch another, worse “freak”… it’s all very fascinating, even though little time is spent on it. Jeph Loeb and Tim Sale have respect for the reader’s intelligence and don’t rub these aspects in your faces. They let you discover and ponder these references for yourself. So I am stating the obvious when I say that knowing these other books and movies will only enhance your experience, but they aren’t necessary to comprehend the story. 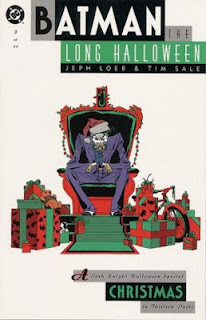 But forget that it’s a Batman story for a minute. How does The Long Halloween hold up as a mystery? Frankly, considered from that angle alone it’s terrible. The only annoying line in the entire book is when Jim Gordon states that: “All the clues were there. Why couldn’t we stop [the killer] sooner?” This line made me want to scream: “What clues???” The twist is really pulled out of nowhere, although I love seeing a classic twist ending from detective fiction played out visually. There are some really subtle moments that hint at this ending when you look at those panels in retrospect, but there’s nothing in the line of actual clues. The book doesn’t quite cheat the reader by lying to them or hiding clues, but clues just never really pop up and the book doesn’t take any time to explain what these clues were.

But… this ending is completely negated by the epilogue, which it turns out may or may not be true. All this makes the mystery angle, which was merely OK at first, turn into a hodge-podge of uncertainty. That doesn’t make for a satisfying mystery. As a serial-killer hunt, as an adventure, as a psychological profile of a superhero and a villain, The Long Halloween works beautifully. But it falls short of the mark as a mystery—while it can still be marketed as one, I don’t think the tag is quite honest.

But remember: this isn’t a pure mystery. It’s also a Batman story, and the way it handles the Batman angles still makes the entire book very worthwhile. If you take half the epilogue as the truth and combine it with what came before, the mystery can still stand up, although it’s not quite as stable as it might be. (Apparently that’s the official explanation, but see this essay for a persuasive argument on why it doesn’t quite work, though there’s one embarrassing misstatement from the author. Obviously it contains spoilers, so the reader is warned.) The mystery angle cannot be ignored, but neither can you neglect the Batman angle. And the marriage of these two angles into one cohesive story is done through Tim Sale’s art. 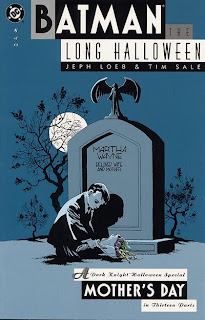 I’m no art critic, so I won’t go into huge detail, but Tim Sale’s artwork for the book is, quite frankly, some of the most beautiful art I’ve ever seen. Batman looks terrific, and the villains who appear are all wonderfully drawn. But the mystery angle is incorporated beautifully, with evocative shadows and the like appearing throughout the book, drawing strongly on the traditions of classic film noir. When the Holiday Killer strikes, the book suddenly switches to black-and-white, although one visually striking item is left coloured. The murderer rarely shows up on panel, but when he/she appears, it is as a faceless entity with a large coat and hat, an image that eerily reminds me of the mental pictures I get when reading the best mysteries. When Batman, Gordon, and Dent reconstruct the murders and try to deduce the Holiday Killer’s identity, we again switch to black-and-white, but instead of a faceless murderer (I love that image!) we get various characters cast as the killer. These sections are, for me, the highlights of the book’s mystery angle.

The (paperback) edition of the book that I bought includes an introduction written by Christopher Nolan and David S. Goyer, as well as several sketches (and brief comments from the creators) at the book’s conclusion. But apparently it also adds in a few images that were cut out of the original comic books. I do not know much more about this, but as someone reading the book for the first time, all the images seemed to blend in together smoothly— and one of the images that was apparently cut out provides the book’s best piece of misdirection, treading a fine line and not-quite-cheating the reader while heavily implying a wrong conclusion! 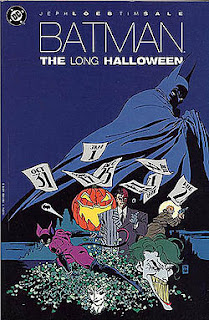 And so that ends my analysis of The Long Halloween. To sum up: as a Batman story it’s fantastic, but it leaves something to be desired in terms of a mystery. Both angles are very important, though, and the artwork is terrific. The characters are great and the authors get big bonus points just for including the Mad Hatter. The tragic downfall of Harvey Dent is really poignant, and the plot is exciting, enhanced by its complex references to movies and books like The Godfather and The Silence of the Lambs. In short, if you’re a Batman fan, you must read this book. But if you’re just a mystery fan, I think you might enjoy it.

But then again I’m biased as hell.

Notes: This review is definitely not even close to the kind of review that Linkara could do, but I’m operating with a few major restrictions: I’m not too familiar with comic books (not having bought any since I was ten or eleven), and I’m trying to analyze the book without spoiling the highly controversial ending. Plus I have tried to approach the book as a complete story instead of explicitly as a comic book. It's more practical for this blog's purposes.

You may have noticed that throughout the review I have refused to use the term “graphic novel”, instead going with the term “comic book”. Maybe that’s a faux pas, but I use the term “comic book” out of pure respect for the form’s history and not to demean it in any way. (I know what it’s like, seeing how viciously the detective fiction I adore is attacked constantly!)

As a final note, if you are familiar with comic books, you might be envious to find out that I am about to discover Watchmen for the very first time. I have refused to see the movie due to my hatred for Zack Snyder’s style of direction, and so I literally know nothing about the book going in. I look forward to reviewing it in the near future.