Who Watches the Watchmen? 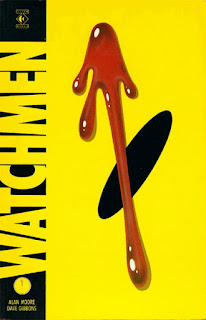 Watchmen has been hailed as one of the greatest comic books of all-time, the Citizen Kane of comics if you will. It’s one of the few specimens in the comic book genre that “serious” critics will discuss, let alone look at. It even made it to Time Magazine’s Top 100 Novels list, the only comic book to do so. So how is it that I managed to know absolutely nothing about this book before picking it up and reading it for myself? I remember hearing about the movie adaptation directed by Zack Snyder, and I saw trailers for it. But that was the summer of The Dark Knight, and I have hated Snyder’s directing style with a fiery passion ever since sitting through 300. So I skipped the movie and refused to have anything to do with it. Until a few weeks ago, when I asked for suggestions on good comic-book mysteries. Watchmen came up on the list. I read the plot summary and suddenly I was kicking myself: it sounded like just my kind of plot! How silly of me to have passed this book up because a director I dislike made an adaptation of it!!!

So off I went to fill my digital shopping cart, and to make a long story short, that’s how I came to read Watchmen. The writer, Alan Moore, is one of the most respected comic book writers out there, being the mastermind behind V for Vendetta, The League of Extraordinary Gentlemen, and The Killing Joke among others. The book is illustrated by Dave Gibbons, but I’ll talk about the art later since I’m not an art critic (irony of ironies, I now work in a paint shop).


Disclaimer: I won't be analyzing the book in depth, though feel free to start a conversation about it in the comments. I want to give my impressions of the book as a story without using spoilers, because that's how I approach things on this blog. 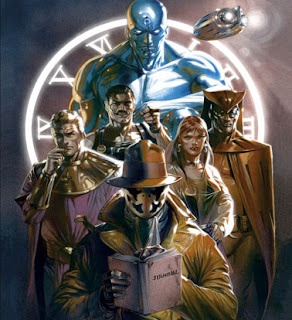 Watchmen takes place in an alternate-reality 1985, where superheroes exist. Or, rather, “masked vigilantes” exist, since apart from one character (Dr. Manhattan) nobody possesses superpowers. Superheroes are outlawed, although government-sanctioned ones are still active. Another interesting tidbit: Richard Nixon is still in office. And America is still engaged in a perpetual Cold War with the Soviet Union, although Dr. Manhattan has given them a strategic edge over those pinko commies.

The book opens on the murder of a superhero: Edward Blake, aka The Comedian, was murdered in his apartment and then thrown out of a window. Since the Comedian’s real identity is not public, the policemen investigating are puzzled: who could have hated this Blake guy so much? And who could have been physically capable of beating this muscle-bound guy so severely? Masked vigilante Rorschach is convinced that this is the work of a “mask killer”, someone targeting superheroes. But what motive could anyone have for eliminating superheroes? He goes around town and begins an investigation of his own in the tradition of the hardboiled P.I. 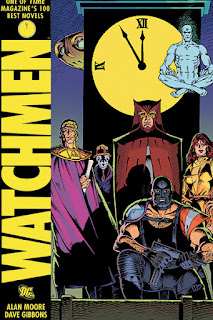 The plot is dazzling: it keeps you interested in these characters, their stories, and how superheroes’ existence could have affected the world around us. The ways superheroes get eliminated one after another are extremely clever, and everything ties in neatly at the end. Much to my surprise, Watchmen turned out to be an excellent fair-play mystery as well, in which readers are given all of the clues. While the culprit’s identity is one of the oldest tricks in the book, the motive is a dazzling one that I absolutely loved. And looking back at certain key scenes in retrospect, everything is hinted at very neatly—clues are given to you without you even realizing you’re holding a clue in your hand. The only problem with the clues is that they make more sense once you know the ending—the logic needed to piece them together is of a very comic-book sort. But because all the clues are given instead of hidden, this still manages to make the book a satisfying mystery experience.

What more can I say about Watchmen that hasn’t already been said? It’s a helluva read, and the symbolism that occurs throughout the book is quite good without becoming intrusive. One of these is Tales of the Black Freighter, a fictional comic book that pops up to serve as a parallel storyline. Although the first time it appears it seems like a pretentious and confusing-as-hell storytelling device, when the fictional comic book is explained at the end of Chapter 5 it makes a lot more sense going forward.

That’s another thing—this is the only time I’ve come across a comic book that might be better described as a “graphic novel”. This is because the individual issues (in collected form called chapters) end with supplementary material to give background information on characters or this alternate-reality 1985. It makes for very interesting reading and although the story telling is non-linear, it’s easy to follow.

But that brings me to my one major, major criticism of the book: the character of Dr. Manhattan. I friggin’ can’t stand the guy. I just don’t understand this character. He has a tragic and fascinating backstory, but he’s just another one of those emotionless Spock-types who thinks in terms of pure logic. Despite that, he has some very dramatically-convenient moments where he does show emotions, and these just feel contrived. He decides to abandon Earth at one point and refuses to save it because his girlfriend slept with another guy “so I have no connection to humanity anymore and bla-bla-bla”. Just get over it, man— we all have problems, but most of us aren’t super-beings who can vaporize people they don’t like with a mere thought. Whenever this son-of-a-gun intrudes in the story, I groaned on the inside. He debates with another character whether humanity is worth saving, and the conclusion is one of the most damn-convenient ones I’ve ever seen. This character just really irritates me and it gets particularly bad near the end of chapter/issue 4. For someone who thinks logically, he just acts like an idiot. “I’m going to be surprised in seventy two seconds by news that Einstein’s ghost appeared in Berlin” he’ll say, but he insists that he doesn’t know about this yet. Just listen to your own words, you moron! Imagine how much time you’ll save, and then you can have more time to look at your neutrinos and your quarks and whatever else you want.

Aside from this one character, the characters of Watchmen are a triumph. Surprisingly, I found myself particularly liking Rorschach, even though at times he seems like an estranged cousin of Mike Hammer. But he does have a fascinating backstory and his presence can be a very menacing one.

I won’t analyze the way Watchmen deals with politics, religion, and all that other fun stuff because there’s no way I can do it justice without spoiling too much. But I will say that its political criticisms of conservatism are a bit too extreme—  it seems that everyone with so much as a slightly conservative bent is an evil, elderly, rich, white man surrounded by shadows, plotting to take over the world.

I really liked the artwork for the series, by Dave Gibbons. The images are reminiscent of old comic books, and the characters look wonderful. They can express genuine emotions. Shadows can come into play like in the finest tradition of film noir. Again, I’m no art critic and I don’t want to analyze too much of the story in my praise for the art, but it really is fascinating what can be accomplished with the art. The transitions are seamless, and when two things are occurring simultaneously, they can be paralleled in comic-book form in a way that would never work in any other medium. 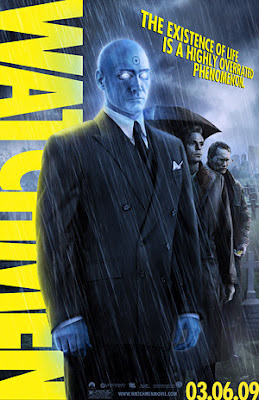 And yes, I’m talking specifically about the film. I will not give it a full review and you couldn’t pay me enough to do so. Zack Snyder’s idea of subtlety is to crack a walnut open with a sledgehammer with the word “subtle” written on it in magic marker. All the stylistic quirks I despise so much made their way into the 30 minutes I saw, and I refuse to sit through two or more hours of that. Not only that, there are four cuts of this movie, which show an incredible indecisiveness from the director’s part! Did he want to film the book panel-by-panel? Did he want an adaptation that retained the book’s plot and themes while taking liberties to make it more accessible to film? Or was he just high? The villain is as subtle as a Steven Seagal movie, and I’m surprised he/she didn’t burst into maniacal laughter with a church organ playing DRAMATIC music in the background. The action is over-stylised and not particularly impressive. The ending, which I skipped to and saw five minutes of, is filled with DRAMATIC SCREEEEEEEEEEEEEEEEEEEEEEEEEEEEEEEAMING and it just ruins the book’s artistry. And, typical Snyder, he can’t decide whether his background music is going to be heavy metal or a more traditional orchestra approach. And thus I refuse to sit through the entire movie.

But let’s get back to the book and wrap things up. As you can guess, I loved it with the exception of the supremely annoying Dr. Manhattan. From a mystery angle, it works brilliantly. I may have given the impression of a work so dark it would make James Ellroy plead for comic relief, but Watchmen is really a celebration of the superhero genre in general. The alternate universe is a fascinating one and the supplementary material you’re given makes for some excellent reading as you get to know this world. And there’s enough subtle symbolism to keep an entire room of literary critics alive for at least one year.