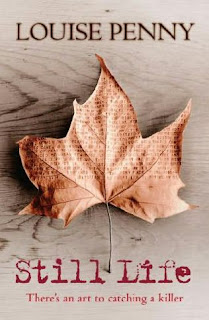 Louise Penny’s Still Life is one of the most frustrating books I’ve read all year long. Damn it all, this book starts off so well!!! But the wheels fall off so abruptly in the final act, and we’re left with the most anticlimactic ending I’ve come across in a long time… probably the worst since Catherine Aird’s The Religious Body back in November of last year!!!

The quiet community of Three Pines is a small, peaceful village in rural Québec… and one morning, the community’s peace is shattered when Jane Neal is discovered dead, killed by an arrow. Was it an accident? Then why isn’t anyone coming forward? And where is the arrow? And for that matter, if it was murder, who could have done it? After all, Jane was well-liked by everyone. It sounds like a job for Chief Inspector Armand Gamache!


I have read two books in the Gamache series: The Murder Stone and Dead Cold. I really liked both of them. Both “impossible crime” novels, Penny showed a tremendous writing talent and also managed to fool me with her solution to the mystery in some way or another, particularly for The Murder Stone. I knew what to expect: a clever mystery with great characters and terrific writing. And for much of the book, I got just that.

And then, something happens. Somebody confesses to the murder of Jane Neal and allows the police to arrest him/her. But as any reader of mysteries knows, they couldn’t possibly be the killer… and suddenly the book takes a nosedive for the worse. Till that point, the book was rather flawed, but enjoyable. The finale erases all memory of that. 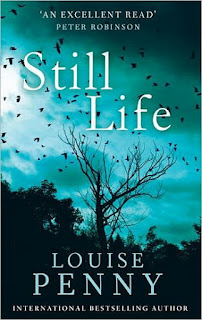 The culprit becomes blinkingly obvious very quickly, even though they have no real reason for having murdered Jane Neal! Oh, there is an attempt to create a motive, but it’s a weak one that left me very dissatisfied. The killer might as well have been convinced that they were murdering a rogue stapler, or a leprechaun named O’Doyle, or an alien from the planet Zoorg!!! What makes this worse is that every other suspecthas a legitimate, clever motive for potentially wanting to do away with an old friend!

But that’s just one of the stops on board the Cliché Train, which decides to stop at every station. When we find out just why a teenage character has been so angry lately, for instance, I just wanted to throw my copy of the book across the room and scream “No *bleep*ing way!!!” I can’t believe this was intended as a surprise! Several of these “surprises” are anything but: why Jane kept people out of her house, who the killer is, the ridiculously obvious symbolism of a playing card which is still explained to you, etc.

I usually have no problem with a Monologuing Villain—you know, the kind of loser who can’t just kill somebody, they have to explain why they’re doing it and how and how clever they’re being and how nobody will ever know. But this one bothered me. He’s a dull villain—though remember I use the pronoun “he” only out of convenience and it could easily be a “she”. More importantly, though, he suddenly undergoes a major character transformation just to serve the plot. Before the “shocking” twist, he seems like a nice guy, but once the twist is revealed and he starts on his speech, he turns into a Bond villain doing a Hannibal Lector impression. I was half-expecting him to unleash The Unnecessarily-Slow-Ticking Device of Death! There’s cleverly hiding a character’s true nature… and then there’s this.

Finally, there’s the book’s greatest failure: the most annoying character in the world, a police officer named Nichol. She’s the kind of person who can’t work well with others, doesn’t like or respect authority, and cannot take any advice. And at first she works well as a character. But after a point, I couldn’t stand her anymore. Here she was, getting plenty of hints that the problem wasn’t in others but in herself. In fact, at one point, she literally comes across something that tells her that to her face, directly! Instead, she manages to find a way to twist it against her boss, Gamache. It’s very funny the first time. It’s getting old by the second time. By the fifth or sixth time, I wanted to strangle the hag. Seriously, if somebody could be that stupid, I don’t want to know a thing about them. (Nichol resurfaces in Dead Cold, but is far less annoying and more believable.) 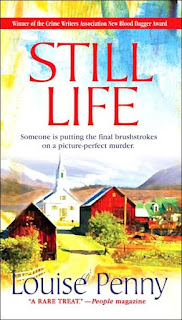 Then there’s the annoying way the book keeps switching viewpoints and times. We build up to a major emotional moment… and then we skip past it, only to have a character recall what happened. And, particularly at the beginning, the book has a very annoying habit of going into flashbacks—in fact, more than once we were in a flashback inside of a flashback! What is this— Flash-ception?

I realize I’m being very, very rough on this book, but it was so close!!! I know Louise Penny can do better than this. In fact, in her second book she already improved enormously, and I genuinely love The Murder Stone. Still Life comes across as cliché, with a badly concealed and blatantly manipulated mystery that left me very, very annoyed. I was expecting something interesting or clever—I got this. Honestly, readers are better off skipping this book and heading straight to the second in the series, Dead Cold. Even though I try to be lenient to a first mystery, the ending to this one is so frustratingly bad that it removes all memory of the enjoyment I had from the first two acts.

I guess we all have our off-days, and I suppose it being a first novel in a series, Louise Penny can be forgiven for trying to introduce characters, etc. Louise Penny isn’t done on this blog. I’ve already started on her newest Gamache novel, The Beautiful Mystery, which has started off excellently. I hope that the ending can live up to the beginning, though…