It seemed to be a good idea at the time... 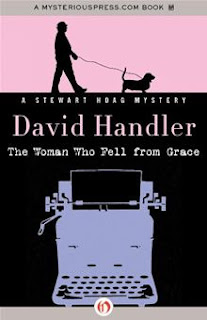 I was given a review copy of The Man Who Would Be F. Scott Fitzgerald by David Handler, newly (re)published in e-book form by MysteriousPress.com. I had nothing but praise for the book, and in fact, I loved it so much that I went out and bought several more entries in Handler’s Hoagy and Lulu series of mysteries—which should give you an idea of just how much I loved the book. Anyhow, once I did that, I couldn’t stay away much longer, and so I went on to read The Woman Who Fell From Grace, the next entry in the series.

Oh, Shenandoah, a 1,032 page Revolutionary War epic by Alma Glaze, is the greatest phenomenon of all-time in the publishing world. It’s one of the best-selling and most talked about novels of all-time, and was also adapted into an acclaimed Oscar-winning film. Before her tragic death in a car accident, the author wrote an outline for a sequel to Oh, Shenandoah, to be entitled Sweet Land of Liberty. But there was one catch: the book was to be written 50 years after the author’s death. That time is up now, and the author’s daughter, Mavis, is to write the sequel…

So Alma’s sons, the Glaze twins, contact Stewart Hoag, better known as Hoagy (as in the cheesesteak, not Carmichael). It turns out that Mavis is ruining the novel with her own ideas, which Mavis insists are those of her mother as communicated to her in dreams. Nonsense, of course—but because Mavis has sole authority over the estate, the final decision is hers. Many ghostwriters have been contacted and all have fled after their encounter with Mavis Glaze.

That’s where Hoagy comes into play. As a former celebrity himself, he knows how to handle them, and he accepts the job right away. But not all is well at Shenandoah, the beautiful home of Mavis Glaze. But when Hoagy arrives, Mavis has unexpectedly left, leaving him alone with the cook, Fern O’Baugh. Fern knows about Hoagy’s reputation for attracting murder, and she begins to talk about the movie adaptation of Oh, Shenandoah, when lead actor Sterlin Sloan suddenly died of an aneurism. Fern insists it was a cover-up and that Sloan was murdered, and asks for Hoagy’s help. 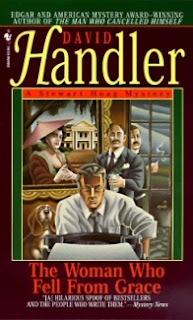 Naturally, Hoagy dismisses Fern as an old lady with too much time on her hands, babbling nonsense… until she suffers an ‘accident’, apparently having fallen down a steep set of stairs and killing herself. Suddenly, Hoagy realizes there may be more to this story, and then more blood is spilled. Blood stained the production of the film, and more of it will be spilled over the sequel. The question is: why?

The Woman Who Fell From Grace is a terrific read, and I highly recommend it. As a novel, everything works beautifully. The characters are excellent, be they the leads (Hoagy and his dog, Lulu) or the supporting cast. One of the best characters in the book is Gordie, a little boy whose parents were killed by a drunk driver and who has been adopted by Mavis Glaze—as much for the publicity as anything else. Gordie is a lisping, younger version of Hoagy himself, with a cat named Sadie instead of a dog named Lulu. But the normally-shy Gordy immediately forms a bond with Hoagy:

I also really liked the murder victim, Fern: one of life’s jovial figures who are well-liked by everyone. This makes her murder all the more shocking and you want to see the killer caught. Other characters, such as Mavis Glaze, could have come across as stick figures in the hands of a lesser author, but Handler manages to make them complex—you want the best for them even if you don’t like everything they do, which you most certainly don’t. Mavis comes across as a flawed human being instead of a stereotypical old-witch-who-holds-the-purse-strings.

The comic relief is really excellent, and although there are many ‘cutesy’ moments (especially with Gordie), these never become overly cutesy or, for that matter, annoying. They simply come across as very genuine moments between a young boy and a man he looks up to. If I have one complaint, though, it’s that not much is done with Mavis Glaze’s ideas for Sweet Land of Liberty. When she brings them up for the first time, the scene is very funny, but Hoagy manages to talk her out of it right away and we only get one or two more references after that. I would have loved to see more of these crazy ideas. 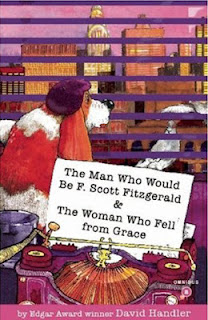 So how’s the mystery? It’s not nearly as strong as the one in The Man Who Killed F. Scott Fitzgerald. It’s fairly clued—and Steve McQueen himself ends up providing a pivotal clue—but I had an instinctive guess about the ending and what motive would be involved, and I was right. I’m starting to have a real problem with motives like this, but I can’t say why without completely spoiling it for people. Let’s just say the twist has lost its novelty. And so, while reading the ending, I couldn’t help but feel disappointed… and then something happened. Suddenly, a spanner was thrown into the works and a new wrinkle was added into this particular case. It caught me completely off-guard and I felt genuinely shocked. I won’t specify what exactly it was (I’m trying to navigate the Spoiler Rapids)… but it closed the book on a terrific note that almost made me want to cry.

Maybe that makes me a loony, but if so, I was a happy loony. Although the book seems to go for an ending that is (more than) a little bit tired, it throws something unexpected in there that makes everything worthwhile. The ending struck me as more guessable than in the previous book of the series, but it’s not a major problem in the book as a whole. The Woman Who Fell From Grace is well-written. It can be funny and unpretentious, and very intelligent as well. The characters are fantastic and I absolutely loved the character of Gordie, who comes across as a younger version of Hoagy himself. It’s not one of the genre’s masterpieces, but I do recommend it for two reasons:

Notes: As usual, the e-book as released by MysteriousPress.com is excellent. It's well-edited and easy to read.