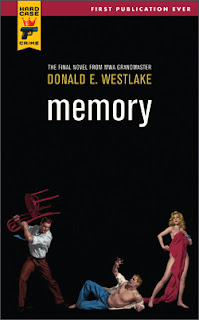 Donald E. Westlake’s Memory was published posthumously by Hard Case Crime. It was written by the author way back in his early days of writing, but it was never published. I first heard of this book when reading an article on Donald E. Westlake by Lawrence Block, collected in Mystery & Suspense Writers, Volume 2. Block described the novel and praised it in glowing terms. According to the article, 30 years later, Westlake decided not to publish the novel because he considered it too much a creature of its time.

I’m a big Donald E. Westlake fan, though admittedly I’m a newcomer. And Memory is a challenge to describe. It’s unlike anything I’ve ever reviewed for this blog. It isn’t a mystery in any proper sense of the word, and yet… Okay, here’s the plot: Paul Cole, an actor, is assaulted by the husband of his current lover, and he lands in the hospital. But on waking up, he finds that his memory is bad—it is like a sieve, full of holes and gaps that he simply cannot fill. Memories are constantly draining from his head, though he remembers who he is, how to dance, and (presumably) how to tie his shoes. I know what you’re thinking: this sounds a lot like Memento! But it isn’t anything like the brilliant Christopher Nolan movie – which I highly recommend. Memory is very much a creature of its own…


I’m truly baffled at how to proceed. There is no crime, so I’m kind of surprised that Hard Case Crime ended up publishing the book. But no matter: the main character is constantly searching for the truth about a disturbing event that he forgets, but which leaves its impression in his mind. Unfortunately, I instantly realized what the whole game was about and was left rather bored with the psychological implications, wondering why the main character was getting so worked up over nothing. Memory is an interesting experiment with a fascinating idea, and it should be a lot more fascinating than the result… but somehow, it just isn’t. But I was constantly aware that I should be a lot more fascinated than I was.

I suspect the big problem with the book is quite simply the central premise. We know who Paul Cole is. He ends up forgetting a few times. But we already know. We’ve always known—we opened on Paul’s injury, after all, and found out what led to it. Paul is constantly in a state of doubt over his very basic identity, but we cannot share in that. When Paul goes to search for something, he forgets the very basic facts that we witnessed along with him, and so while he struggles to get anywhere, I was looking at my watch, wondering how much longer he would take to get on the same page as me. Wouldn’t it have been more effective if we started out in the middle of the story, and had to piece everything together along with Paul? It’s not a perfect idea, but I think the results would have been more interesting. Look at how Memento turned a standard, familiar story into a fascinating experience using precisely that storytelling device. (OK, I swear, that's the last Memento comparison!)

The other problem with Memory is that Paul Cole is simply unsympathetic. He’s in a constant state of self-effacement and grows weaker as a character the further we progress in the book. I know, I know: that’s the whole point and I’m merely a foolish mortal who can’t understand genius. But it just doesn’t work like it should— we sympathize with his situation, but he constantly has to discover the same things all over again and it quickly gets repetitive. And this doesn’t make the character more fascinating—it makes him more dull.

But Memory is not a complete disaster. It’s a decent book, let me emphasize that; but it is a highly flawed one in my opinion, not the masterpiece it’s supposed to be. There is a true element of tragedy: a successful actor, Paul comes back to his hunting ground in New York City, where his friends are quick to sympathize. But it soon becomes clear that they don’t care about the new Paul Cole, they are just wondering when they can go back to profiting off of the old Paul Cole. Nobody is concerned with him, but with how his situation affects them. Even when he goes to see a priest for advice, the priest is soon caught up in the (admittedly delightful) theological problem of how Paul’s memory would affect his religious obligations and affiliations. Paul Cole is alone and abandoned in the middle of New York City, despite being surrounded by a circle of his former friends.

But sometimes, there’s too much tragedy. There’s only so much I can take of people being jackasses. Look, I like character development fine, and sometimes I can sit back and enjoy a slower book. And I like the central premise of this book. There are some stellar scenes and a few interesting moments. But the overall effect was that the more I read Memory, the less interested I became. It’s not a great novel, but it’s okay, and fans of Donald E. Westlake will probably go ahead and read it no matter what I say. I don’t feel like I wasted my time, but I can’t help but wish I had read something else.